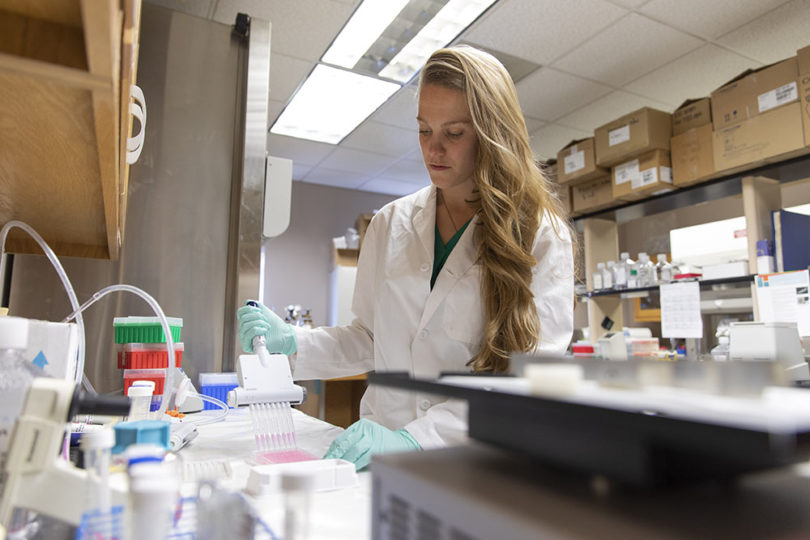 Samantha Spellicy, graduate student of the Stice lab, performs a lab test on the therapeutic activity of exosomes. (Photo by Andrew Davis Tucker/UGA)

It’s been almost a quarter century since the first drug was approved for stroke. But what’s even more striking is that only a single drug remains approved today.

In a publication appearing this month in the journal Translational Stroke Research, animal scientists, funded by the National Institutes of Health, present brain-imaging data for a new stroke treatment that supported full recovery in swine, modeled with the same pattern of neurodegeneration as seen in humans with severe stroke.

“It was eye opening and unexpected that you would see such a benefit after having had such a severe stroke,” said Steven Stice, Georgia Research Alliance Eminent Scholar and D.W. Brooks Distinguished Professor in the University of Georgia’s College of Agricultural and Environmental Sciences. “Perhaps the most formidable discovery was that one could recover and do so well after the exosome treatment.”

Stice and his colleagues at UGA’s Regenerative Bioscience Center report the first observational evidence during a midline shift—when the brain is being pushed to one side— to suggest that a minimally invasive and non-operative exosome treatment can now influence the repair and damage that follow a severe stroke.

Exosomes are considered to be powerful mediators of long-distance cell-to-cell communication that can change the behavior of tumor and neighboring cells. The results of the study echo findings from other recent RBC studies using the same licensed exosome technology.

Many patients who suffer stroke exhibit a shift of the brain past its center line—the valley between the left and right part of the brain. Lesions or tumors will induce pressure or inflammation in the brain, causing what typically appears as a straight line to shift.

“Based on results of the exosome treatment in swine, it doesn’t look like lesion volume or the effects of a midline shift matter nearly as much as one would think,” said Franklin West, associate professor of animal and dairy science in the UGA College of Agricultural and Environmental Sciences. “This suggests that, even in some extremely severe cases caused by stroke, you’re still going to recover just as well.”

Trauma from an acute stroke can happen quickly and can cause irreversible damage almost immediately. “Time is brain,” a phrase coined by stroke advocacy organizations in the late 1990s, captures the importance of acting on the first signs of stroke. In less than 60 seconds, warns the Stroke Awareness Foundation, an ischemic stroke kills 1.9 million brain cells.

Data from the team’s research showed that non-treated brain cells near the site of the stroke injury quickly starved from lack of oxygen and died—triggering a lethal action of damage signals throughout the brain network and potentially compromising millions of healthy cells.

However, in brain areas treated with exosomes that were taken directly from cold storage and administered intravenously, these cells were able to penetrate the brain and interrupt the process of cell death.

“Basically, during a stroke, these really destructive free radicals are all over the place destroying things,” said Stice, director of the RBC. “What the exosome technology does is communicate with jeopardized cells and work like an anti-inflammatory agent to interrupt and stop further damage.”

According to the team’s results, neuroimaging is an essential tool for evaluating brain tissue and managing stroke recovery.

In this observational study, the team analyzed brain images taken 24 hours after stroke. They then applied recovery scores, commonly used in human practice, based on swine gait, cadence, walking speed and stride length. By recording the relationship between brain measurements and functional outcomes, the new assessment scales can better help physicians predict how quickly a person will recover in real time.

“What I’m trying to do with this assessment data is come up with something that we can implement in the clinics right now—today—to help with predicting patient outcomes,” said Samantha Spellicy, a neuroscience graduate student and first author on the publication.

Spellicy, who is currently training under Stice, began her first two years at the Medical College of Georgia at Augusta University and has plans to return to MCG after completing her Ph.D. She anticipates a return to stroke care and one day using the same outcome assessments presented in the study with human patients.

“When a patient arrives in emergency with a stroke, the available clinician would not be left crunching an arbitrary number based on some standardized scale assessment,” Spellicy said. “Instead, the clinician could take more of a personalized approach based on the patient’s midline shift measurement, and, say for instance, ‘OK, in three months you’re going to get better, but you’re going to have issues with your gait. Let’s talk to a specialist now to target that exact condition.’”

As for the future of the exosome treatment, Spellicy and the RBC team anticipate that the patented neural exosome technology, called AB126, will be filed for clinical trials by 2021.