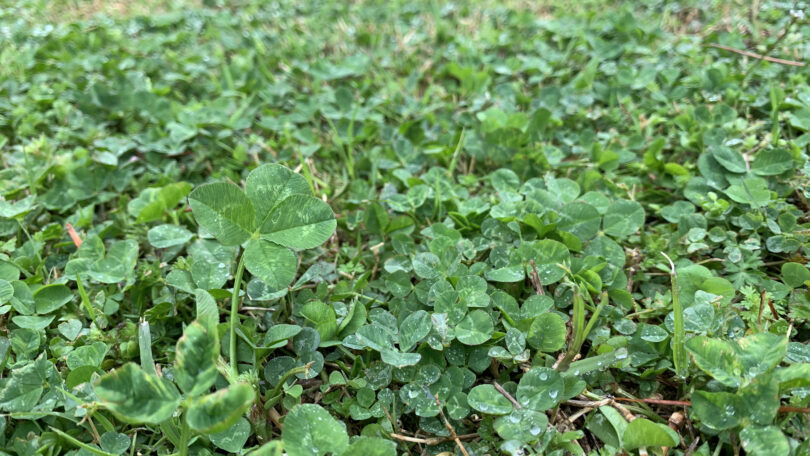 A four-leaf clover, recently found in the writer's backyard. (Photo by Aaron Hale)

If you’ve ever scanned a field looking for a lucky four-leaf clover, then perhaps you’ve wondered why they are so rare.

It turns out, scientists aren’t exactly sure about the mysteries of four-leaf clovers, either.

“The jury is on out why,” said Vincent Pennetti, a second-year doctoral student at the University of Georgia’s College of Agricultural and Environmental sciences. Pennetti’s work focuses on genetic engineering in turfgrass, but he’s also an amateur clover breeder who has gotten pretty good at spotting them in the wild (see more below).

For clovers to produce four leaves, Pennetti said, it takes a combination of genes and environment, but the precise interplay of those two and other factors is still unsolved.

A decade ago, UGA researcher Wayne Parrott and his research team identified the genetic markers associated with the four-leaf trait in white clover (trifolium repens), a prevalent species in yards across the U.S. 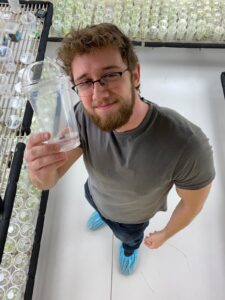 Parrott, a Distinguished Research Professor in Crop and Soil Sciences, also found the location of other genes that can add red coloring to white clover’s leaves.

But even with markers that could be associated with the four-leaf clover trait, it isn’t exactly easy to “make your own luck.” The four-leaf trait doesn’t always show up when expected, even if the genes are present.

“It’s been a really tough trait to do,” Parrott said. “If daylight or temperatures aren’t right, you won’t see it.”

But at other times, five, six, or as many as eight leaves will show up.

“My parents really wanted me to be good at baseball,” Pennetti recalled. “I wasn’t. I am not built for sports.”

So coaches sent him to the outfield, where he would be less of a defensive liability.

“No one was hitting there,” he said. “I had nothing to do. I was just standing around looking for four-leaf clovers.”

But he wasn’t having any luck at that either.

Eventually, as a high schooler waiting for the bus, he finally spotted a pair of four-leaf clovers.

And he wanted more.

That’s around the time he learned about Parrott’s research concerning multifoliate clover genetic markers at the University of Georgia. Pennetti reached out for advice from Parrott, who in turn gave him pointers on plant breeding over Skype. 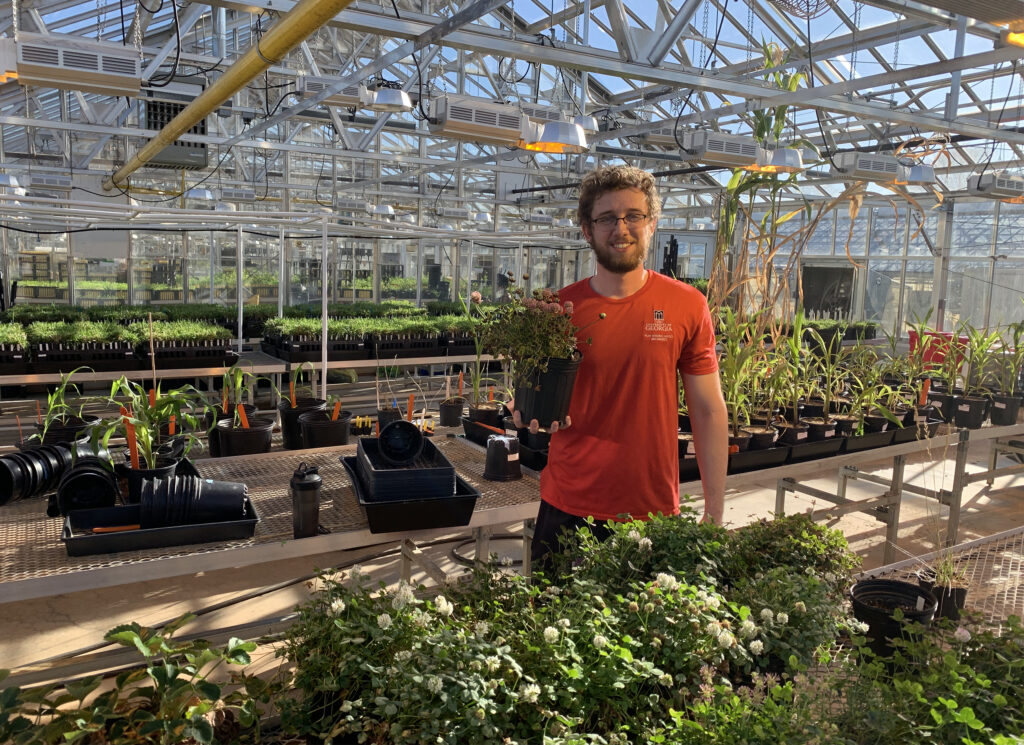 Pennetti has been breeding clover ever since. That passion eventually brought him down to Georgia to pursue his doctorate.

While his research focuses on creating better turfgrasses for the consumer market, he remains committed to white clover. He tends to a variety of ornamental clover plants at a UGA greenhouse that have been bred for decorative shapes and leaf markings; some even grow pink flowers

Finding a four-leaf clover isn’t easy, but one UGA doctoral student is on a mission to research, find, and breed this mysterious plant. Pennetti’s personal line of clover, bred from some of the first plants he discovered nine years ago, grow in his basement under an LED lamp. As a side hustle, he preserves and sells four-leaf clovers on Etsy for people who want them as novelties or wedding gifts.

“One guy last year ordered $300 worth of clovers just to give out at a senior living community for St. Patrick’s Day,” he said.

Could four-leaf clovers be genetically engineered?

Gene-editing technology has opened the door for all sorts of advances in crop sciences—not to mention the fight against deadly diseases.

With enough research funding and today’s CRISPR technology, Pennetti said, it could be possible to create a four-leaf clover in the lab one day. But Pennetti doesn’t want to be the one to make that happen.

“It would be kind of fun, but on the other hand, I don’t want to ruin the search for everybody else,” he said. “It is nice that it’s still kind of a mystery.”

How to find a four-leaf clover

There is only one four-leaf clover for every 5,076 three-leaf clovers, according to an estimate from the website Share the Luck. But with some strategy and a lot of patience, it is possible to find your own lucky charm. Over the years, Pennetti has gotten good at spotting them.

Here are a few tips for novice four-leaf clover hunters. 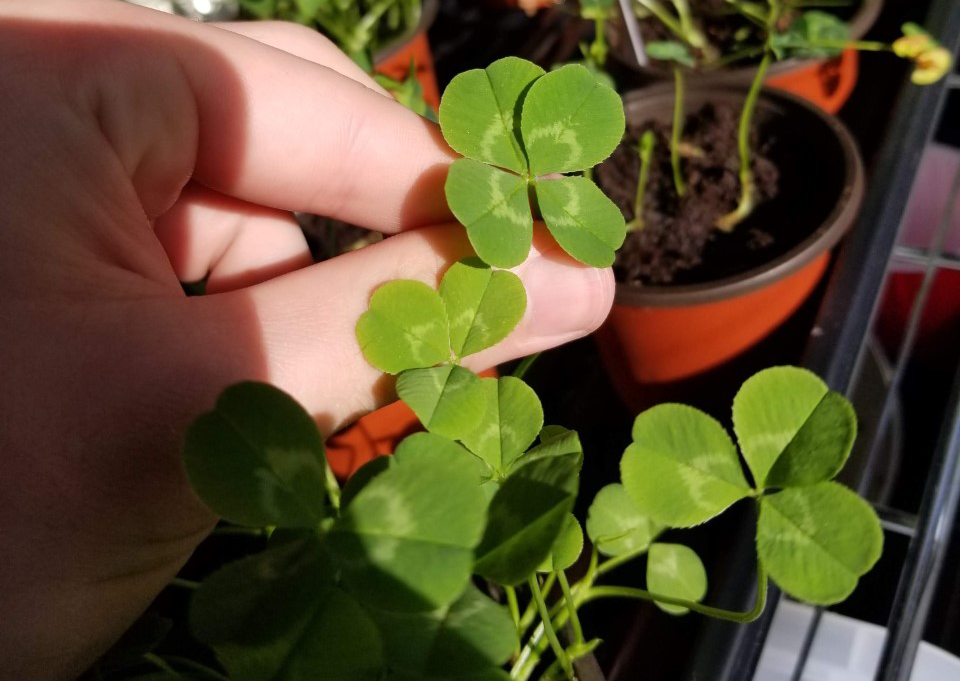 The white markings on a four-leaf clover leaves make a square shape. Regular shamrocks look like a triangle. (Submitted photo)

Find a break in the pattern

Finding multifoliate clovers is really just a “pattern game,” said Pennetti. Looking at a patch of clover, you’ll see the typical three-leaf plants create a triangle shape with the whites of their leaves.

Look for that triangle pattern to be interrupted.

It’s best to hunt for four-leaf clovers on your feet. That will give you the distance from the ground you need to spot breaks in the pattern when trying to distinguish from your typical shamrock.

“Never go on your hands and knees,” Pennetti said. “You’re going to waste so much time.

Don’t linger in any one patch of clover. Instead, keep moving during your search.

“Don’t spend too much time in one area,” Pennetti said. “It’s either going to be there, or it isn’t.”