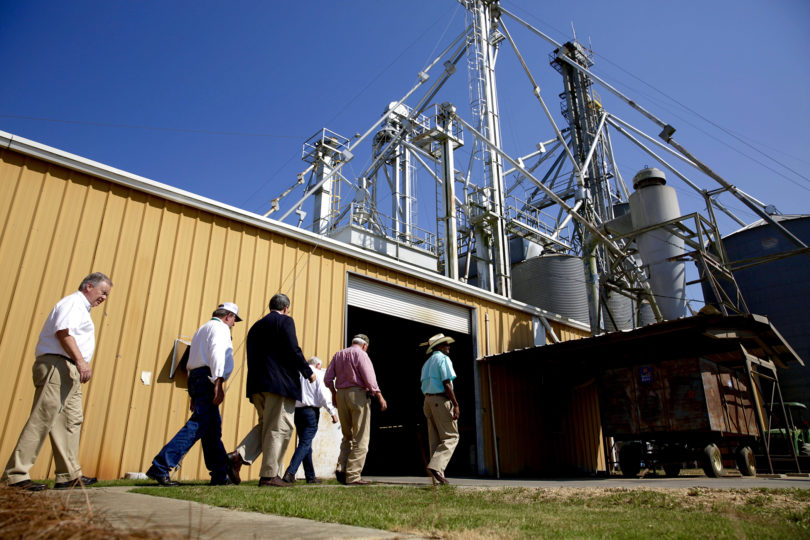 Participants in the fourth annual state agriculture tour learned more about the industry in middle and south Georgia.

UGA and the Georgia Department of Agriculture continue to make Georgia’s No. 1 industry a top priority.

“We are excited to continue our spirit of cooperation and education with the university through the coordination of our annual farm tour,” Black said. “President Morehead has been extremely responsive with his deep commitment to the agriculture industry, and these tours have been a great opportunity to open the communication channel between our farming community and those who support it.”

From watching how a peach is picked, packaged and delivered to learning how federal and state regulators ensure that only the highest quality produce is shipped from Georgia, the day covered a range of agricultural topics.

“This tour is a great reminder of the strong partnership that exists between the University of Georgia and the agriculture community,” Morehead said. “As a land-grant institution, UGA remains focused on providing research, education and outreach programs to help the state’s No. 1 industry continue to thrive.”

The tour started in Fort Valley with a visit to Lane Southern Orchards, a business that gives visitors a close-up view of a real working farm. Peaches are picked, processed on the packaging line and then delivered to neighborhood grocery stores.Next, the group learned about UGA carbon research being conducted at Super-Sod, one of the South’s largest producers of turfgrass sod and seed.

Tour members also learned about how crops originate. In Plains, they stopped at the Georgia Seed Development Commission facility, where various seed types relating to high-value crops such as peanuts, soybeans, blueberries, muscadine grapes, rye, wheat and forages are reproduced and marketed. Most of the cultivars at the Georgia Seed Development Commission were developed by scientists from UGA’s agricultural and environmental college.

The tour concluded with a trip to Albany, where the group visited Plantation Seed Conditioners and the Georgia Federal-State Inspection Service. At this facility, regulators inspect more than 35 different commodities, including peanuts, fruits, vegetables and pecans.

“One of the things that has impressed me since coming to Georgia is the deep appreciation people have for the art and science of agriculture. To see that appreciation extend to the President’s Office at the University of Georgia is significant,” Pardue said. “It’s good for our college and Georgia agriculture that the university’s commitment to the ag industry is strong and still growing under President Morehead’s vision and leadership.”

This was Morehead’s fourth tour with Black since Morehead took over as UGA president in 2013. Last year, the group visited the northeast part of the state and learned about food processing and food safety. The year before, the group toured south Georgia and learned about cotton ginning and the operations at Brooksco Dairy in Quitman.

According to the UGA Center for Agribusiness and Economic Development, Georgia’s total agricultural production reached $14 billion in 2014, the most recent year for which data are available, up
$398 million from 2013. Agriculture contributes more than $74 billion annually to Georgia’s economy.

Georgia’s top five commodities remain broilers, beef, cotton, eggs and timber. Georgia also leads the nation in peanut and blueberry production. One in seven Georgia residents works in forestry, agriculture or related fields. In 2012, there were 42,257 farms in Georgia, a total of 9,620,836 acres of land; the average size was 228 acres.