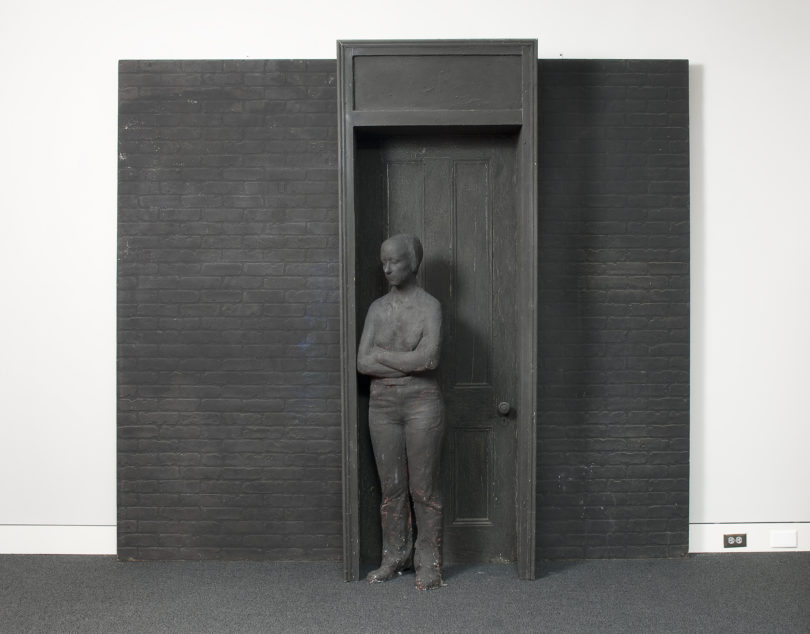 Young Woman in Doorway is part of the exhibition "George Segal: Everyday Apparitions

Athens, Ga. – On Nov. 7, the Georgia Museum of Art at the University of Georgia will repurpose its new media gallery to present the exhibition “George Segal: Everyday Apparitions,” on view through March 6, 2016. Consisting of only three works, all of which are recent gifts to the museum from the George and Helen Segal Foundation, the exhibition will give visitors a chance to focus on Segal’s work at length.

Segal was affiliated with the pop art movement of the 1960s, along with Andy Warhol, Roy Lichtenstein and Jasper Johns. Like these artists, Segal’s work addresses the conditions of modern daily life; unlike them, he focused almost exclusively on the human form. He is best known for his life-size plaster sculptures of human figures arrayed in tableaus. These figures- sometimes ghostly white, sometimes brightly painted-exude a melancholy and isolation Segal believed was inherent to the human condition in the 20th century, much like Edward Hopper’s paintings. The small gallery, which has no windows, removes distractions from the experience of viewing the work.

Two works in the exhibition (“Young Woman in Doorway” and “Post No Bills”) are plaster sculptures, and the third is a large pastel and charcoal drawing. Segal made his sculptures through a process similar to papier-mâché, layering wet medical bandages to create a cast from a live model. In a series of interviews from 1988 to 1989, Segal said that, although casting to make sculptures was once considered “an act of heresy,” he did it because he didn’t “have to think anymore.” He said, “I can make movements with my hands, and I can choose to be as careless and sloppy, and rhythmic as I like. I can be detailed, or let stuff drip. I can make my surface look like a Jackson Pollock painting, or I can make it look like a detail of a Michelangelo portrait. I have complete freedom to muck around exactly as I feel.”

Founded in 2000, shortly after the artist’s death, the George and Helen Segal Foundation educates the public about Segal’s works, donates works of art to museums and grants funds to artists. These works significantly enhance the museum’s holdings in 20th-century American art.