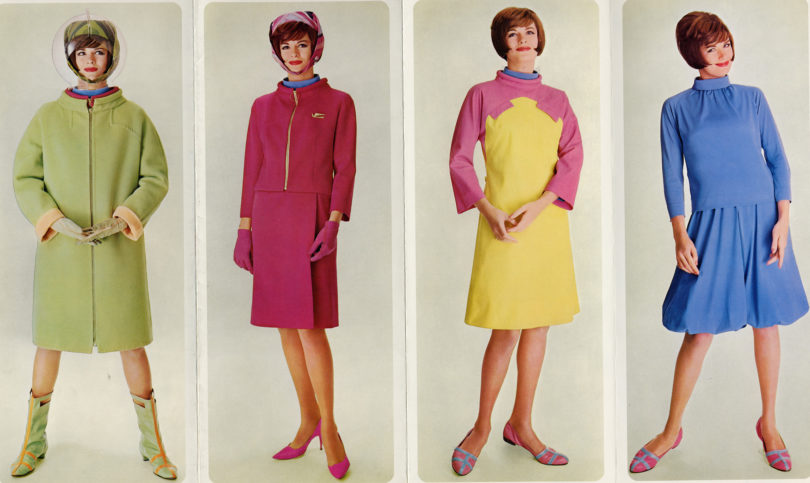 Athens, Ga. – The Georgia Museum of Art at the University of Georgia will display the exhibition “Emilio Pucci in America” Oct. 18 to Feb. 1. The exhibition highlights the famed Italian fashion designer’s role in the rise of postwar Italian dress and how his time in the U.S.-beginning with his enrollment as a student at UGA-influenced his preference for the ready-to-wear collections he is most famous for designing.

The exhibition, organized for the museum by independent curator Mary Koon, will feature apparel produced from collaborations between Pucci and American firms and manufacturers. The exhibition includes a two-piece bathing suit designed by Rose Marie Reid using fabric designed by Pucci; a bra and slip set designed by Pucci for Chicago company Formfit Rogers; Pucci’s colorful flight attendant uniforms commissioned by Braniff International Airlines (plus four vintage Mattel Barbie dolls wearing the uniforms); and the crew patch Pucci designed for NASA’s Apollo XV lunar mission. A selection of silk jersey dresses designed exclusively for such U.S. department stores as Saks Fifth Avenue, Neiman Marcus and Lord and Taylor will also be included, along with objects and ephemera from Pucci’s time at UGA and at Reed College.

From his days as a UGA student, Pucci demonstrated a strong attraction to and understanding of the culture and industry in the U.S., the country that both discovered and promoted him.

Pucci came to UGA from Florence, Italy, in 1935, at the request of his father, who hoped the young Pucci would acquire cutting-edge agricultural knowledge that could be applied to the Pucci family’s agribusiness interests. After a year at UGA, Pucci transferred to Reed College in Portland, Oregon, where he received a scholarship to study political science. It was there he designed his first clothes-ski uniforms for the college ski team, of which he was captain, in collaboration with Portland-based skiwear manufacturer White Stag. He worked with White Stag again after Harper’s Bazaar editor Diana Vreeland commissioned him to design his first collection in 1947, a small skiwear line exclusively for sale at Lord and Taylor in New York. White Stag would continue to produce skiwear for the Pucci brand well into the 1960s.

Pucci became one of the first Italian designers to sell in the U.S. in the immediate postwar years. The American fashion press praised his line for its comfort and elegance, a style for which the country was a keen market. Pucci’s reputation for creating high-end ready-to-wear was solidified in the U.S. by the end of the 1940s.

While large-scale production of ready-to-wear clothing for women emerged in the mid-to-late-19th century in the U.S., ready-to-wear did not catch on in Italy until after World War II. The U.S. and the Marshall Plan played key roles in the success of the rapidly emerging Italian textiles industry through aid programs, markets and cultivation of progressive manufacturing methods in the country.

Pucci opened his first boutique in Capri in 1950, where he produced clothing on a small scale and fitted his designs, particularly his famous “Capri” pants and square-cut shirts, on models in the couture tradition. By 1956, largely due to U.S. demand, Pucci moved toward standardization and mass production. Although the designer’s interest in and knowledge of volume production was born in the U.S., the Italian postwar industrial environment was particularly conducive to the designer’s abandonment of small-scale high-fashion production. In turn, large-scale production was well suited for the less formal but high-end ready-to-wear fashions for which Pucci and Italy are best known.

Events associated with the exhibition include tours led by Koon on Nov. 7 and Dec. 3 at 2 p.m.; a special reception for upper-level members of the Friends of the Georgia Museum of Art on Nov. 7; a holiday-themed Family Day on Dec. 13 from 10 a.m. to noon where children can create Pucci-inspired marbled ornaments; and the after-party for Elegant Salute, the museum’s biennial gala fundraiser, Jan. 31, titled “Get Your Pucci On” and featuring DJs Alfredo and Z-Dog as well as a fashion show organized by Agora Vintage ($65, $50 members).