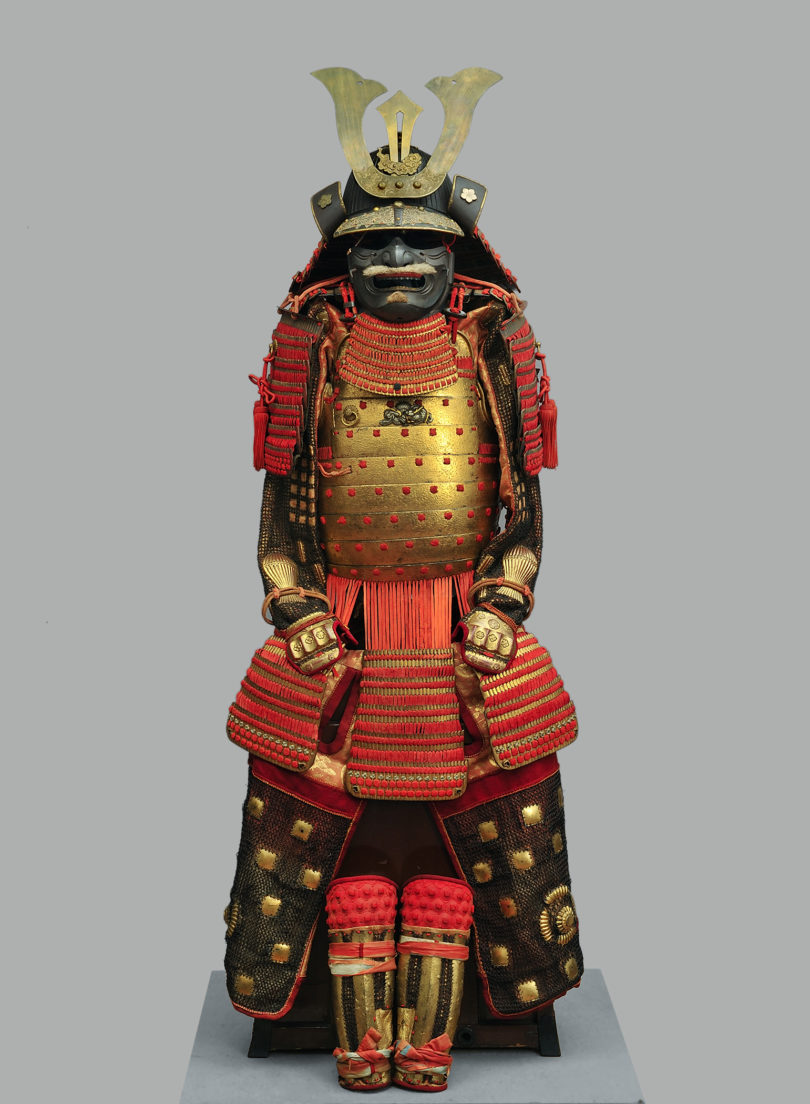 The samurai exhibition includes a piece of composite armor with bust in two parts and laced in red silk. The armour dates back to the second quarter of the 16th century and first half of the 18th century.

Athens, Ga. – The Georgia Museum of Art at the University of Georgia will host the exhibition “Samurai, The Way of the Warrior,” organized by Contemporanea Progetti in collaboration with the Museo Stibbert, from Oct. 24 to Jan. 3. The collection of approximately 100 works of decorative art and artifacts belongs to the Stibbert, which is in Florence, Italy.

The exhibition includes swords, helmets, full suits of armor, sword fittings, bows and arrows, ink boxes and other personal items that belonged to the samurai warriors of medieval and early-modern Japan. One horizontal scroll that depicts a procession of samurai warriors is being displayed for the first time.

Curator Francesco Civita, of the Stibbert, writes, “The Japanese sword can be considered a key to the study of the history, traditions, and customs of Japan. … Because of its various parts and fittings called kodogu in Japanese, which immortalize heroic figures, gods, mythological events, heraldic symbols, animals and objects of daily use, the sword is also an anthropological tool, providing information of considerable importance.” The exhibition includes about 20 swords as well as 20 separate sword guards, equally elaborately decorated.

Helmets feature adornments made to resemble Shinto spirits and demons, and full suits of armor are colorful and complex, with lacquer-accented metal plates and silk ribbons.

Frederick Stibbert (1838-1906) was one of the first European collectors of Japanese art and donated his collection of Japanese armor and arms to the city of Florence. His villa was turned into a museum.

Samurai translates as “those who serve,” and their job was to protect wealthy landowners. Their code was known as bushido, or the way of the warrior, and focused on discipline, honor and loyalty. The samurai were highly involved in the Japanese government and rose to power in the 12th century as a military dictatorship known as the Shogunate. They would rule until Japan was opened to the outside world in the late 1850s.

“The exhibition provides a glimpse into their lives and gives the viewer an opportunity to see the detail that went into the design of every item,” said Annelies Mondi, deputy director of the Georgia Museum of Art, who has been helping to organize the installation of the exhibition in Athens. Previously at the Houston Museum of Natural Science, it will also travel to the John and Mable Ringling Museum of Art in Sarasota, Florida.

Associated events during the run of the exhibition will be held at the museum and include:
• The museum’s quarterly reception, 90 Carlton: Autumn, on Oct. 23 at 5:30 p.m., $5, or free for members of the Friends of the Georgia Museum of Art.
• A gallery talk by Hyangsoon Yi, professor of comparative literature and director of UGA’s Center for Asian Studies, on Oct. 29 at 2 p.m.
• A lecture on the Satsuma Rebellion by Yale University’s William Fleming on Nov. 12 at 5:30 p.m.
• A Student Night on Nov. 12 at 6:30 p.m.
• A demonstration by student organization Kendo at UGA on Nov. 12 at 7 p.m.
• A film series in November and December featuring several films by director Akira Kurosawa.
• A Family Day Nov. 14 from 10 a.m. to noon.
• A tour Nov. 18 at 2 p.m.
• A gallery talk by Masaki Mori, associate professor of comparative literature and assistant director of the Japanese Program, UGA, on Dec. 3 at 5:30 p.m.
• A Teen Studio with artist Kristen Bach on Dec. 3 at 5:30 p.m.

All events except 90 Carlton are free. Teen Studio requires registration in advance.