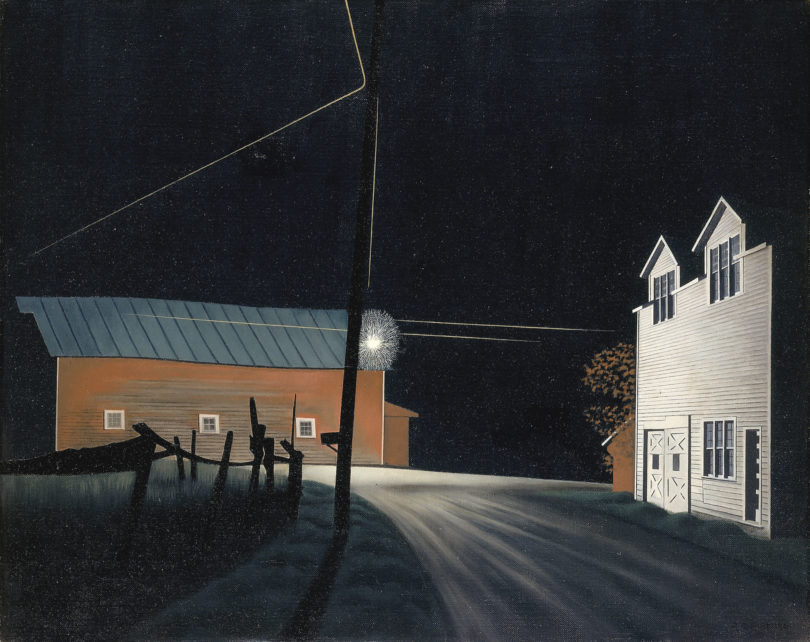 George Ault's "Bright Light at Russell’s Corners" is an oil on canvas painted in 1946. Ault and 22 other painters will be on exhibit at the Georgia Museum of Art from Feb. 18 to April 16

Athens, Ga. – The Georgia Museum of Art at the University of Georgia will present “To Make a World: George Ault and 1940s America” from Feb. 18 to April 16. The traveling exhibition is being organized by the Smithsonian American Art Museum.

During the 1940s, Ault and the other 22 painters in the exhibition worked in isolated communities far from the wartime turmoil of the cities, yet they confronted the chaos and devastating uncertainty of the times through their paintings. Ault shows the intimate corners of his world rendered with obsessive clarity and impeccable control that suggest a counterbalance to civilization at the brink of war.

The exhibition also includes celebrated artists Edward Hopper and Andrew Wyeth and the little-known Edward Biberman and Dede Plummer. Taken together, their works reveal an aesthetic vein running through 1940s American art that has not previously been identified.

This is the first major exhibition of Ault’s work in more than 20 years and includes 47 paintings and drawings by the artist and his contemporaries. It centers on four paintings Ault made between 1943 and 1948 that depict the crossroads of Russell’s Corners in Woodstock, N.Y.

“It was this quality of darkened and haunted mystery—a lonely junction at night—that made me think Ault’s pictures spoke to their times,” said Alexander Nemerov, curator of the exhibition and Vincent Scully Professor of the History of Art at Yale University. “Even so, Ault is not an obvious choice to anoint as the centerpiece of a show subtitled ‘1940s America.’ But viewed in retrospect, Ault’s isolation gave him a chance to speak broadly—to address the sorrow and moody loneliness others felt then too.”

Nemerov will give the annual Alfred Heber Holbrook lecture March 8 at the GMOA. His exhibition catalogue “To Make a World: George Ault and 1940s America,” co-published by the Smithsonian American Museum of Art and Yale University Press, will be available for purchase in the museum’s gift shop.

“Historians have recorded the heroic accomplishments and sacrifices of the Second World War,” said Elizabeth Broun, Margaret and Terry Stent Director of the Smithsonian American Art Museum. “But what were our families at home really thinking and feeling during those times? This exhibition and book delve below the surface of 47 paintings to understand deep emotional currents that help us understand those feelings. With exquisite precision—just like the precise art of featured painter George Ault—Alex Nemerov creates anew this world for all of us.”

The exhibit is sponsored locally by the West Foundation, Boone and George-Ann Knox, the W. Newton Morris Charitable Foundation and the Friends of the Georgia Museum of Art.