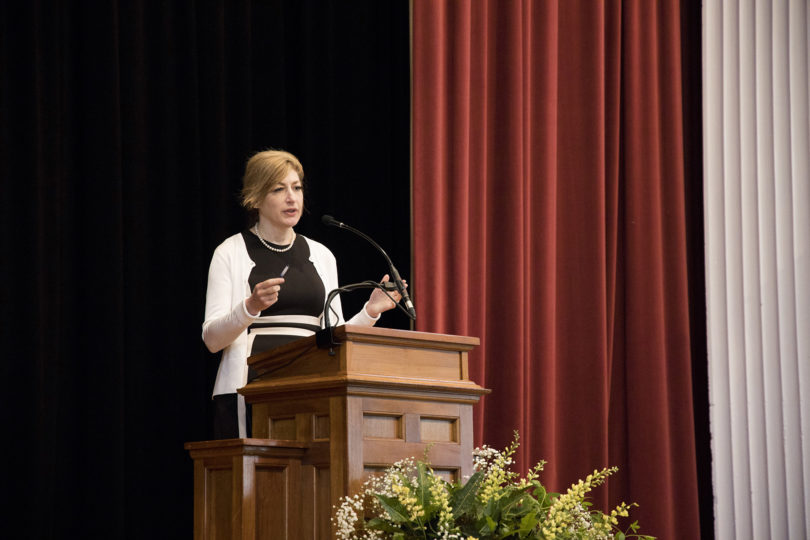 Incivility isn’t new in American politics, but in the current divided landscape, higher education administrators can play an important role in preparing students for engaging in productive discourse, University of Connecticut President Susan Herbst said April 25 while delivering the Louise McBee Lecture at the University of Georgia.

Herbst, who continues to teach and perform research in her field of political science, pointed out that incivility has been a part of the political process in the U.S. since the nation’s founding. Alexander Hamilton, for example, was killed in a political duel, while a senator in the 1800s was attacked in the Senate chamber by a House rival.

“The question is whether America knows how to argue, how to be civil and how to disagree in a productive fashion. I think the answer is a resounding no, hence our current political discourse, which is flip and it’s hysterical. It’s annoying, and it can be downright dangerous,” she said. “We have a real responsibility in higher education to try to come at these problems, even if they’re big and they’re daunting.”

In a survey conducted while Herbst was serving as executive vice chancellor and chief academic officer of the University System of Georgia, she found that students worry about engaging in political discussions on campus because they think it will lead to incivility and hurt feelings. They also struggle with incivility on social media, she added based on recent discussions with students in Connecticut.

Herbst, the author of “Rude Democracy: Civility and Incivility in American Politics,” said that the Founding Fathers envisioned “a rough and tumble kind of democracy” that engaged people in rigorous debates. However, incivility can lead to inaction, she said, and suggested a number of ways to foster more productive conversations.

Herbst recommends that all students be taught how to argue or debate on an intellectual level as well as how to listen with purpose, possibly beginning as early as middle school. In addition, she said that UConn has adopted a strategy of tackling controversial topics by inviting speakers who discuss sensitive and politically charged issues in a respectful, productive way.

Herbst, who became UConn’s first female president in 2010, stressed the need for courageous faculty members to facilitate student debates and discourse on a wide range of subjects. Yet she acknowledged the trepidation that professors can feel in a time when lectures might be videoed and taken out of context on social media.

“At the end of the day, it’s a cultural matter. Most of all, do we really want to become a nation based on civility and substantive argument? If so, we have to force a higher level of sophistication and also toughen up,” she said. “It’s squarely on us (as a society) to fix this mess.”

The Louise McBee Lecture is sponsored by the Institute of Higher Education. It honors McBee, who held leadership positions for more than 25 years at UGA before serving for more than a decade as a champion for higher education in the Georgia state House. This year’s talk is part of the Signature Lecture Series, which features speakers noted for their broad, multidisciplinary appeal and compelling bodies of work.