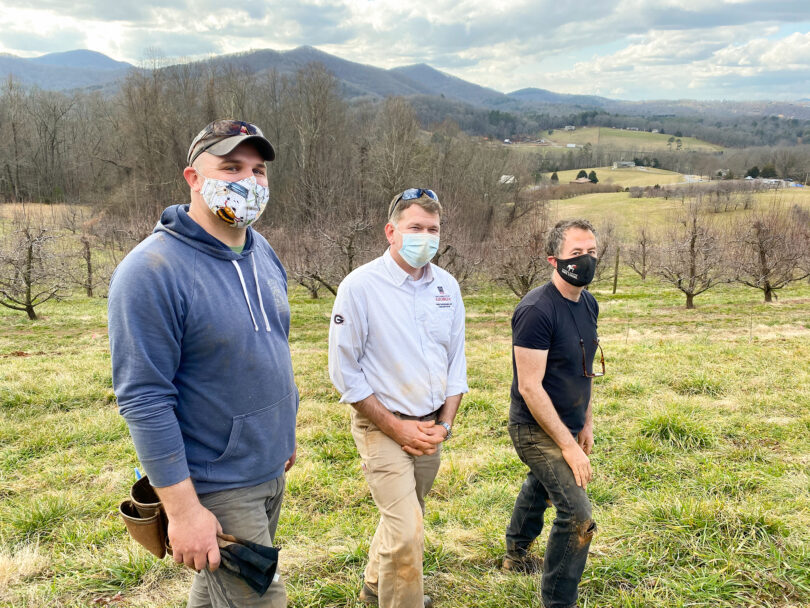 From left, Josh Fuder, Ray Covington and Stephen Mihm have been UGA’s driving forces behind the creation of the Heritage Apple Orchard. (Photo by Mike Terrazas)

The names tick off like racehorses or colors from some fancy catalog: Carolina Red June, Duchess of Oldenburg, Hewe’s Crab and Rabun Bald, Limbertwig and Nickajack and Parks’ Pippin, and many more. But these aren’t paint chips—they’re apples, hundreds of varieties that thrived in orchards across North Georgia a century ago, before an evolving apple industry swept them off shelves and tables, never to return.

Until now. With the help of a dedicated group of University of Georgia researchers, Extension agents and volunteer enthusiasts, Georgia’s lost apple varieties are making a comeback. The newly planted Heritage Apple Orchard, located at UGA’s Georgia Mountain Research & Education Center in Blairsville, is meant to reclaim many of those bygone cultivars and demonstrate why Georgia once was at the center of the U.S. apple industry.

Arranged in neat rows over two hillside acres that overlook the Chattahoochee National Forest, the Heritage Orchard will soon provide another educational and agritourism attraction for the Mountain Research & Education Center, a unit of the College of Agricultural and Environmental Sciences. But it will also yield satisfying produce for Georgia consumers and researchers. 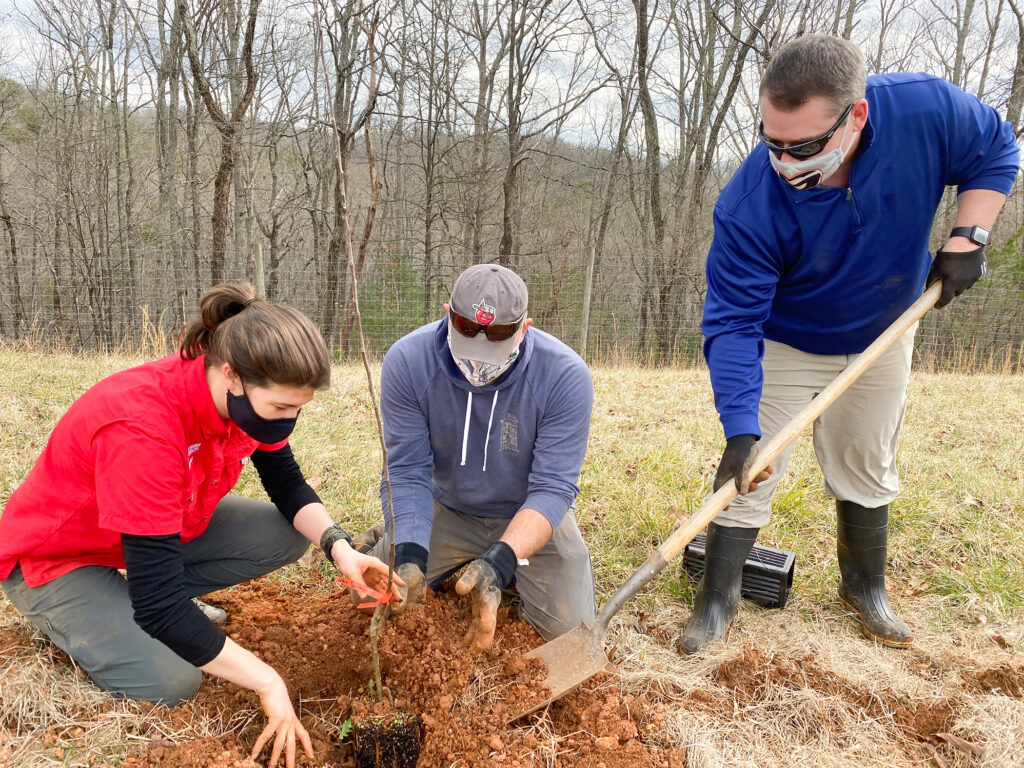 Cooperative Extension agents (left to right) Ashley Hoppers, Josh Fuder and Clark MacAllister plant one of the Heritage Orchard’s trees. They located many of the orchard’s varieties through their contacts with local apple growers and other farmers and tree owners. (Photo by Mike Terrazas)

“One very basic benefit is simply to reconnect Georgians with the history, and the agricultural history, of their state,” said Stephen Mihm, associate professor of history in the Franklin College of Arts and Sciences. “But there’s another, very important virtue to this work, which is that the apple cultivars that thrive in Georgia are not typical in their tolerance for heat and humidity. There’s growing interest in tapping into those traits genetically, and that’s not only restricted to apples.”

Mihm helped launch the Heritage Orchard project out of personal interest. He and his wife purchased an old farmhouse near Athens that came with a restrictive covenant requiring that the acreage be used, at least in part, for agricultural production. A native of Connecticut with fond childhood memories of apple orchards and cider mills, Mihm decided to plant a few lesser-known varieties and became interested in learning more about them.

Meanwhile Joshua Fuder, the UGA Cooperative Extension agent for Cherokee County, had also purchased a home with several heirloom apple trees planted in the yard. Not knowing much about apples and feeling both a professional and personal obligation to learn more, he found his way to the U.S. Department of Agriculture’s Plant Genetic Resources Unit, based in Geneva, New York.

“They said, ‘Hey, did you know there’s a professor down there who’s working on this, too?’” recalled Fuder, who then tracked down Mihm and suggested they collaborate. Armed with a modest USDA grant, the two began to search for lost Georgia apple varieties, a task that quickly proved challenging when you’re talking about single, lonely trees spread across the state.

The problem lay in apple trees’ method of reproduction. Because trees grown from seed often do not produce the fruit of either parent, commercial apple trees typically are created by grafting a cutting (or scion) from the desired variety to the rootstock of another variety. So there were no forgotten drawers of old seeds waiting to be discovered—Fuder and Mihm would have to exhaust every connection they had to find clues. Mihm said he spent many hours driving backwoods roads, scanning the countryside for the occasional stand of apple trees.

Meanwhile they were having better luck turning up examples of apple varieties that were not quite lost but still uncommon—some even in danger of disappearing. They pivoted and successfully filed for a revision of the USDA grant, with the primary purpose this time being to create a repository for this small but growing catalog. And so was born the idea for the Heritage Orchard. 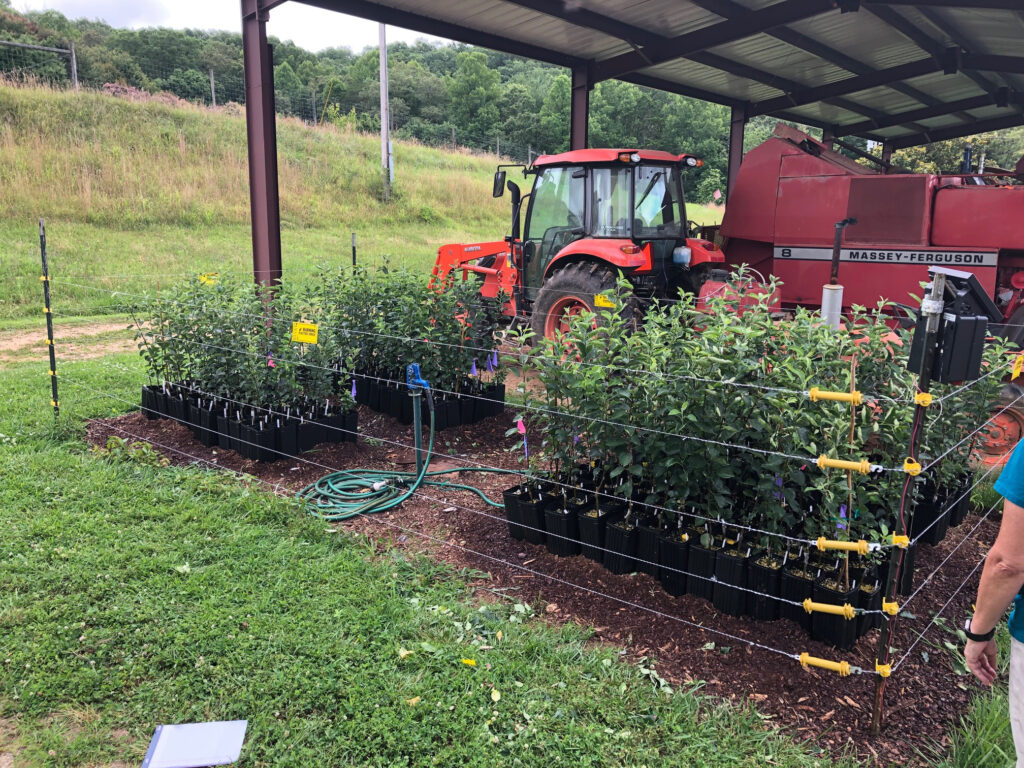 The Heritage Orchard’s baby trees grew for almost a year inside an electrified enclosure to protect them from hungry deer. In March 2020—just before the world went into lockdown due to COVID-19—a group of researchers, extension agents and volunteers had grafted the rare varieties onto a root stock that will produce trees of just the right size and vigor. (Photo by Josh Fuder)

To date, the team has preserved nearly 140 different varieties. In March 2020, they grafted scion wood from 101 of those varieties onto M7 rootstock, which will result in trees in the just-right range for height and vigor. For almost a year the young trees grew in pots at the Blairsville station, protected from hungry deer by an electrified fence. Then, on a beautiful afternoon in early February, those time-traveling trees went in the ground.

“Apples have been part of this station since it was first built back in the 1930s,” said Ray Covington, superintendent of the Mountain Research & Education Center, which already had hundreds of apple trees, but only about eight or nine common cultivars. “The whole concept of reviving these old Southern varieties fits perfectly with what we try to do up here.”

The orchard is also attracting interdisciplinary partners. Franklin College is represented through Mihm, CAES through Covington and the Extension through Fuder and other agents. Professor Brad Davis from the College of Environment and Design is also on the USDA grant, for which Mihm serves as principal investigator.

Anticipating the fruits of their labor

“It’s just a fantastic collaboration,” Covington said. “We’ve got the trees separated into four general areas based on their blooming time and how they respond to disease, and that sets us up to address some really great research questions.”

In March, another batch of varieties will be grafted onto rootstock, and those baby trees will also spend time growing in pots within their safe enclosure, waiting to join their older cousins in the ground. Within about three years, the Heritage Apple Orchard will produce its first fruit.

As for apple varieties that have been truly lost, Mihm and Fuder hope that once people hear about the Heritage Orchard, the owners of those lonely trees will come to them. And Georgia aficionados once again will have a chance to sample apples their great-great-grandparents might have once enjoyed.

“At one time, Habersham County arguably produced more apples per capita than any other part of the country—it was big business,” said Mihm, who also hopes the Heritage Orchard provides a boost for the state’s cider industry, similar to what’s happened with Georgia winemakers. “The Mountain Research & Education Center gets a huge number of visitors each year. We hope to have tastings and cider pressings—we want to have public events to show people in this state that they can grow these apples again after 100 years.”