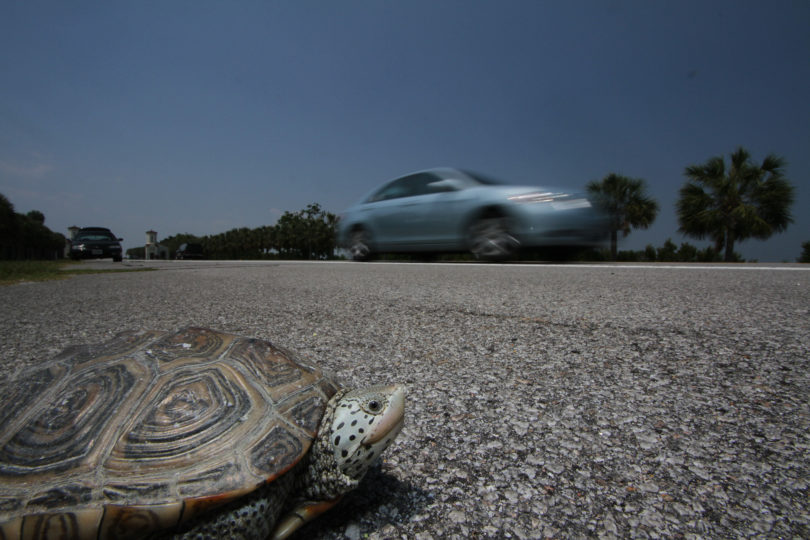 Hybrid barriers that keep diamondback terrapins out of the roadways could cut down on road deaths, a new UGA study has found. Road deaths are one of the biggest threats to the terrapin population. (Credit Robert Horan)

One of Georgia’s most colorful turtle species could be wiped out on Jekyll Island by simply wandering into traffic — but not if man-made barriers keep them off the road.

A new study by researchers at the University of Georgia found that a man-made barrier erected along part of the Jekyll Island Causeway could keep nearly 58 percent of diamondback terrapins off that section of the road.

“Thousands of terrapins are struck each year on high-traffic roads in New Jersey, Maryland, Georgia and elsewhere,” said Brian Crawford, a postdoctoral researcher at UGA’s Warnell School of Forestry and Natural Resources. “It’s a chronic threat to populations, but it’s also an issue for people. Anytime you have that much wildlife on roads, you have to consider the safety of motorists. So finding ways to reduce road mortality will help us benefit wildlife as well as people.”

Nearly all terrapin fatalities are adult females looking for a place to lay their eggs, Crawford said. They seek out areas above high tide lines, and that’s where roads tend to be. The summer nesting season-May through July-brings hundreds of terrapins onto causeways near Jekyll, St. Simons and Tybee islands in Georgia. Summer also brings peak traffic on coastal roads as people vacation.

In a paper recently published in Herpetological Conservation and Biology, Crawford and other authors say “hybrid barriers” could be key to helping terrapin populations recover on Jekyll Island and other areas where vehicles often kill them.

The barriers are one part short fencing that prevents female terrapins from getting to the road and one part nest boxes that provide attractive nesting habitat and protection from predators.
Researchers tested a section of the Jekyll Island Causeway, a 55 mph road that connects the mainland with Jekyll Island that brings more than 3,400 cars every day, peaking between May and July during summer tourism season. 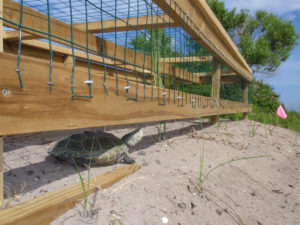 These hybrid barriers not only stop diamondback terrapins from entering the road, but they also provide a safe nesting area for them to lay their eggs. (Credit Brian Crawford/UGA)

The Jekyll Island Causeway is also the site of between 100 and 400 adult female terrapin deaths each summer. Drilling down into the data, they picked out three “hot spots” on the causeway that had a higher number of terrapin fatalities.

Using data spanning several years, the researchers compared the number of terrapin deaths from before they put up the barrier and after. They also examined how turtles fared on two other parts of the causeway that had no barriers at all.

After the barriers were constructed, they detected a 57.3 percent reduction in terrapins emerging onto the road at the site with the hybrid barriers while finding no change at two unblocked sites on the causeway.

A companion study authored by Warnell alumnus Dan Quinn and also published in Herpetological Conservation and Biology found that the barriers reduced the percentage of nests destroyed by predators from 100 percent to 7 percent during that same period.

Diamondback terrapins are native to the coastal tidal marshes of the eastern and southern U.S. and are found as far north as Massachusetts, as far south as the tip of Florida, and as far west as Texas. They are listed as endangered species in some states.

In addition to being hit by vehicles, its populations have also been impacted by habitat loss, commercial and recreational crabbing, and increased numbers of mammal predators like raccoons that raid terrapin nests. If road deaths and nest loss on Jekyll Island aren’t addressed, Crawford said, the terrapin population there could ultimately disappear.

“There are always many threats impacting wildlife simultaneously, and there’s a growing awareness that conservation strategies won’t be successful if they only focus on one thing,” Crawford said. “This study was an example of designing one management device that had multiple benefits to wildlife populations. The barriers were effective, but there’s always more to do.”

“Right now, many roads like the causeway are slowly but steadily draining animals from nearby populations,” Moore said. “Conservation strategies like these hybrid barriers are cost-effective levers that don’t just plug the drain-they provide suitable habitat and a way to refill previously impacted populations.”

Crawford said researchers continue to study solutions to keeping terrapins alive, and they have presented their findings to the Jekyll Island Board. Unfortunately, Crawford said, it’s not cost effective to install these types of barriers along all the roads terrapins are known to cross.

“They’re costly to build and maintain, so you need to be selective about where you place them-where terrapins are crossing in highest numbers,” Crawford said. “We knew where crossing hotspots were for Jekyll, but it took two years of intensive monitoring to figure that out.”

However, this information isn’t known for many other sites. The Tybee Causeway had the highest number of fatalities last year, and there are also a high number of terrapin road deaths on St. Simons.

Some residents in these nesting areas, he said, have put up barriers themselves to keep the terrapins off the roads. Crawford and the co-authors also worked with the Georgia Department of Transportation to install flashing warning signs similar to school zones signs on the Jekyll Island Causeway that focus on the times terrapins are most likely to come up at high tide. These signs would be helpful in other causeways, Crawford said, and efforts are underway to install those.