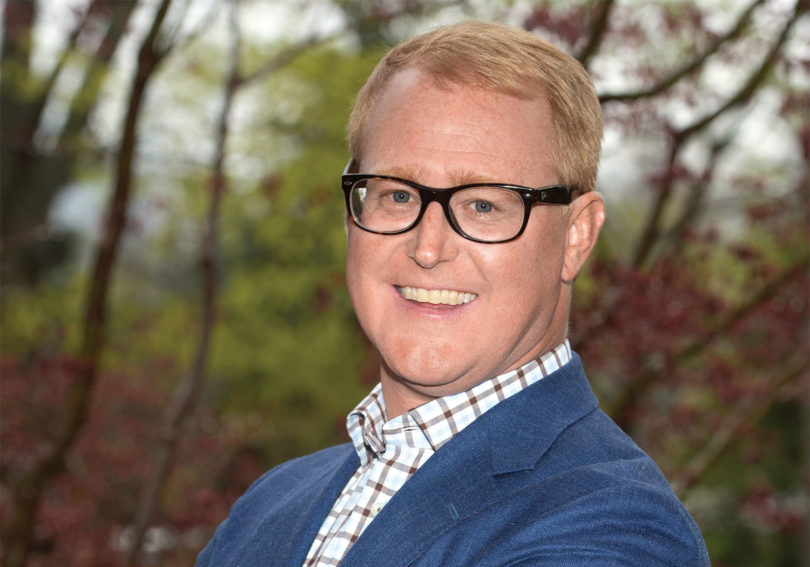 John Ozier came to UGA to compete on the track team and left with an English degree and a budding career as a songwriter. His many credits include two songs that hit no. 1 on the country chart. Ozier is now a leading music executive in his hometown of Nashville and member of UGA's 40 Under 40 Class for 2018. (Photo Special)

Nashville’s music industry has a well-earned reputation for machine-like efficiency. John Ozier doesn’t disagree, but he encourages listeners to probe a bit deeper.

“This town is really built by songs,” says Ozier AB ’02, a Nashville native who returned home after graduating from UGA to become one of the industry’s top executives. “They have to be authentic. The truly great ones make the hair on the back of your neck stand up. It’s all about feeling and emotion.”

A state-champion pole vaulter in high school—one of three sports he competed in—Ozier came to the University of Georgia to compete for the men’s track and field team. But he soon burned out on athletics and pivoted toward his true love: music. As a student, Ozier spent many nights playing in bands across Athens and learned he had a knack for songwriting.

He graduated from Georgia with an English degree, and after a few months working part time for a record company in North Carolina, an acquaintance called and offered him a job at Curb Records in Nashville. He packed his bags and moved home.

At Curb, Ozier worked directly with superstar country artists like Tim McGraw and LeAnn Rimes and also wrote a lot of songs. His creative contributions to Curb culminated in 2012 when he co-wrote two No. 1 songs—“Hard to Love” by Lee Brice and “Whiskey in My Water” by Tyler Farr.

In 2013, while seemingly at the top of his game, Ozier quit writing professionally. He took an executive position with ole, a Toronto-based music rights management company (rebranded in June as Anthem Entertainment). Ozier’s responsibilities included representing some 45 songwriters, and he felt that it would be unethical to compete with them.

That decision, along with his increasingly savvy leadership skills, made Ozier someone to watch in Nashville’s quickly diversifying music community. All the while, he kept his ties to UGA strong, too, mentoring several students in the university’s Music Business Program. Some, he even helped find jobs after graduation.

Ozier’s work earned him a lot of admirers. One of them was Reservoir, the largest independent music publisher in the world. For more than a decade, they had been looking to expand into Nashville, and following an early 2019 meeting with Ozier, Reservoir found the right man to lead the way.

Ozier started his new role as Reservoir’s executive vice president of creative on April 1, and the company opened its physical space in early May. Ozier will have the opportunity to build the office from the ground up. On opening day, the three-story, 1920s-era house just a few blocks from Music Row was without furniture save Ozier’s desk.

Ozier’s excitement is palpable, and he knows exactly where he wants to start: with great songs.

“Songs become the storybook of our lives,” Ozier says. “Everybody has a song that makes them remember their first girlfriend or when they got married or when their first kid was born. That’s what makes music so great.

“And then to watch it from the creator’s standpoint, they’re going to write songs back there that are going to change the world,” he continues, pointing to the eight songwriter rooms that are currently empty except for some freshly unrolled carpeting. “It’s pretty awesome to be a part of it.”