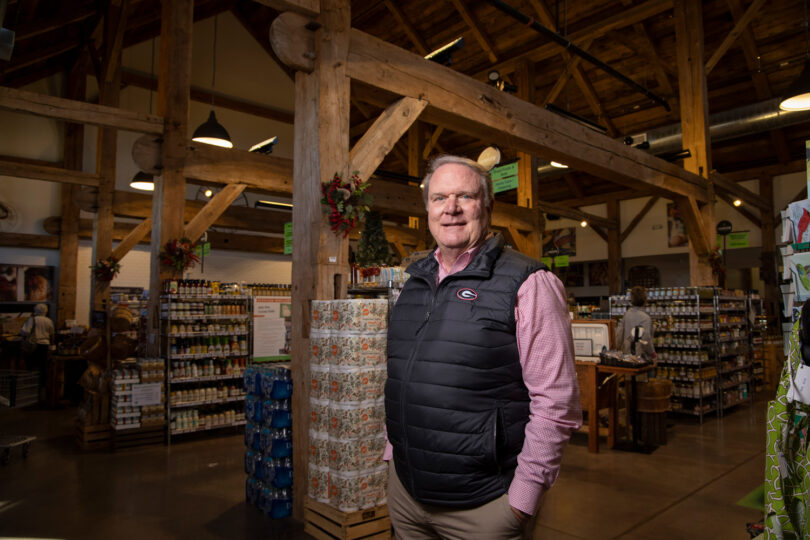 Keith Kelly BSA '80 standing in Farmview Market, just south of Madison, one of the many businesses that make up his company, Kelly Products. (Photo by Peter Frey/UGA)

About two years ago, Keith Kelly BSA ’80 looked up one of his former professors in the College of Agricultural and Environmental Sciences, where he’d earned a degree in agricultural economics. He connected with his now-retired mentor Jere Thorne MS ’66, and they met in Athens for a cup of coffee.

“I don’t have an agenda,” Kelly told Thorne. “I just wanted to say thank you. What you taught me, I’ve been able to use my entire career.”

Thorne became slightly emotional and replied that very few people ever came back to say thank you and that he greatly appreciated Kelly’s effort. But taking that extra step, putting in that extra effort, and giving back to those who have given to you is a defining character trait for Kelly.

Kelly is the founder, president, and CEO of Kelly Products, which employs more than 200 people and is based in Covington, about an hour from Athens.

He launched Kelly Products in 1993 based on his expertise and innovation in two disparate areas: innovation of plant protection products and the development of software products to streamline business functions for businesses regulated by the 50 state departments of agriculture.

Those software products are now used by more than 30 state governments, but they barely scratch the surface of the company’s scope. Kelly Products now encompasses a diverse group of 17 agricultural companies, and while many are B2B or in partnership with states, several are consumer-oriented.

For instance, Farmview Market (seen above) opened in 2015 a few miles south of Madison. It’s a combined butcher shop, farmer’s market, and gourmet food store. Among the many locally sourced products on its shelves are ice cream, cheese, and other dairy products from Rock House Creamery, which Kelly established in Morgan County in 2016. The creamery harkens back to his family’s history as Georgia dairy farmers.

“There is consumer demand for locally produced products,” Kelly says. “One thing I hear at my store over and over again is ‘who produced this?’ People want to know where their food comes from.”

The market is just another way for Kelly to give back. With regard to UGA, his meeting with Thorne was just one way he has kept his ties strong.

In 2019, he was elected to the UGA Foundation Board of Trustees. In 2020, Kelly; his wife, Pam BSHE ’80; and fellow alumnus Robert Varnadoe BSA ’83 endowed two Rural Scholars Scholarship Funds and created two non-endowed Rural Scholars Scholarship Funds. Those gifts will provide renewable yearly scholarships for a cohort of four to six students from rural Georgia communities every fall.

“I have a passion to see these rural communities not go away,” Kelly says. “There are kids from rural communities who might be geniuses, but they don’t have the opportunity to even get to the starting block. So let’s give them a chance, give them a great education, and maybe they will return to their community and start a business.”