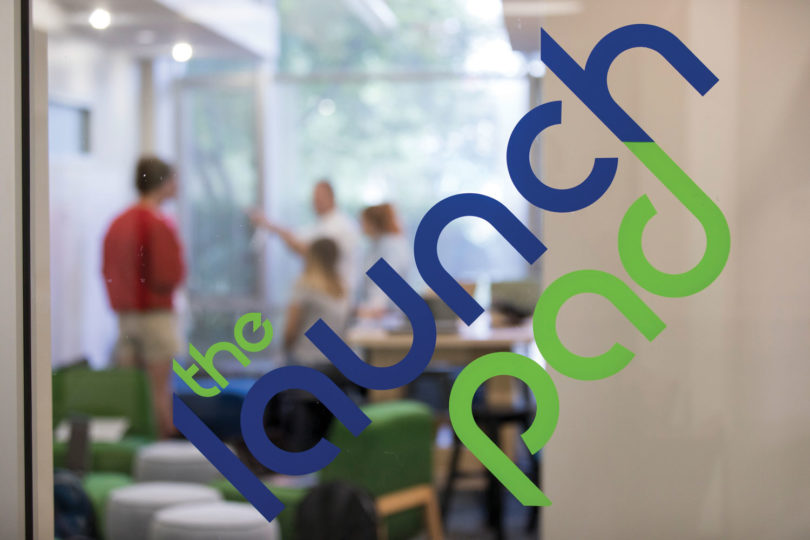 The first year of the Launch Pad was so successful that for the 2019-20 academic year it will grow from 26 to 40 residents. (Photo by Andrew Davis Tucker/UGA.)

What it’s like to live in UGA’s first living-learning community dedicated to innovation and entrepreneurship.

For her first year at the University of Georgia, Abby Davis could have lived most anywhere she wanted. She chose the fourth floor of venerable Creswell Hall.

“I’ve always had an entrepreneurial spirit. I just knew I wanted to start a business someday,” says Davis, an international business and finance major from Santa Clarita, California, a suburb of Los Angeles. “I was looking at a lot of schools, and I knew I wanted to get an entrepreneurship certificate. UGA was the only one with a living-learning community.”

A recent trend in university housing is to integrate academics into residence hall life. The Launch Pad is one such living-learning community, created specifically to spark innovation. Its first 26 residents, all aspiring entrepreneurs, moved in last August. The community was such a success that the 2019-20 Launch Pad will include up to 40 residents. 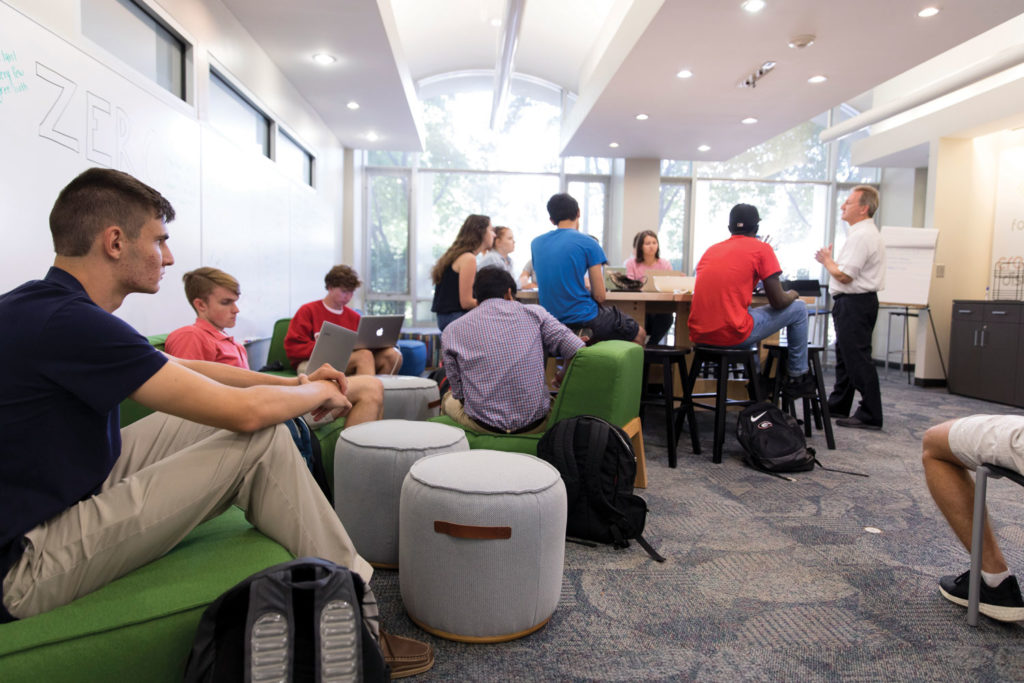 Launch Pad students live on the fourth floor of Creswell Hall, but they do a lot of their work in a renovated space on Creswell’s first floor. It includes ample collaboration space, snacks, a fridge, and a 3D printer. (Photo by Andrew Davis Tucker/UGA.)

The Launch Pad is tailor-made for students like Jared Zengo, a computer science major from Athens, who started a business making art installations out of Rubik’s Cubes when he was 16. “I just love entrepreneurship,” Zengo says. “Launch Pad is like coming into UGA with a built-in group of friends because we are all in this together.”

“I’ve seen an unbelievable sense of camaraderie develop,” says Cali Brutz, lecturer and associate director of the UGA Entrepreneurship Program. She co-developed and co-taught the First-Year Odyssey course on entrepreneurship with fellow lecturer and co-director Don Chambers and remains a mentor to the Launch Pad residents.

“When everyone came in that first day, they were still trying to find their place. There was a lot of stress,” Brutz continues. “Now everyone is finding their groove. To me, a lot of the college experience is about learning that you don’t have to put on a front that you know it all. Instead, you take the resources that are available to you and improve yourself.”

The “living” aspect of the Launch Pad is similar to other residence halls, but in addition to general conversations about dinner, class, and Netflix premieres, there is also an intriguing sense of purpose.

“I like that there are people I can bounce ideas off of,” says Hannah Abdulhaaq, an economics major with a fashion merchandising minor from Douglasville. Like Zengo, she entered Launch Pad with some entrepreneurial experience in hand, having started a clothing resale business in high school. “For a creative person, it’s great to get immediate feedback.”

On the “learning” side, Launch Pad residents have keycard access to their own renovated co-working space off the lobby of Creswell Hall. The space is stocked with tables and stools, sofas and ottomans, snacks, a refrigerator, and a 3D printer. There are other perks too, including membership in the Four Athens Tech Incubator, membership in the Society of Entrepreneurs, and opportunities to meet one-on-one with successful entrepreneurs.

They also have the option of taking part in the Idea Accelerator, an eight-week program hosted by the Entrepreneurship Program that focuses on customer discovery. Students enter the accelerator with their ideas and have to come up with a business model, target market, and other particulars, and then present it, Shark-Tank-style, to a panel of judges. It can be humbling.

“It builds perseverance,” says Charley Sun, a mechanical engineering major from Marietta, who went through the accelerator in the fall. “If you make it, though, your ideas become stronger, you build more of a foundation, and you end up with more confidence the next time.”

All of this year’s Launch Pad students will be living elsewhere in 2019-20, but they won’t be forgetting their time on the fourth floor of Creswell anytime soon.

“I’m going to want to come back here in 10 years to see how it is,” Davis says. “There are big things coming for this program.”

Anyone can become an entrepreneur anytime. And an increasing number of these budding art, business, scientific, and communications leaders are finding their way at UGA.

The University of Georgia’s Entrepreneurship Certificate Program has grown from 33 students in 2015 to more than 420 students in 2018-19, and while the program is housed administratively in the Terry College of Business, it’s open to students of all majors. Certificates are available at both the undergraduate and graduate levels and the comprehensive curriculum includes training to help students become future innovators in the public, private, and nonprofit sectors.

“What we’re trying to do is make sure students in the program develop the skill set and know what it takes to start their own business by themselves, wherever they are in life,” says director Bob Pinckney BBA ’82.

Making entrepreneurship a certificate program was a strategic decision. Creating a major or minor would require placement in a specific college; a certificate ensures the program stays interdisciplinary. Another facet of this strategy is a new focus on entrepreneur-specific facilities like the Launch Pad and Studio 225.

“These facilities represent a significant investment, and they are head-and-shoulders ahead of what most any other university in the country has,” Pinckney says. 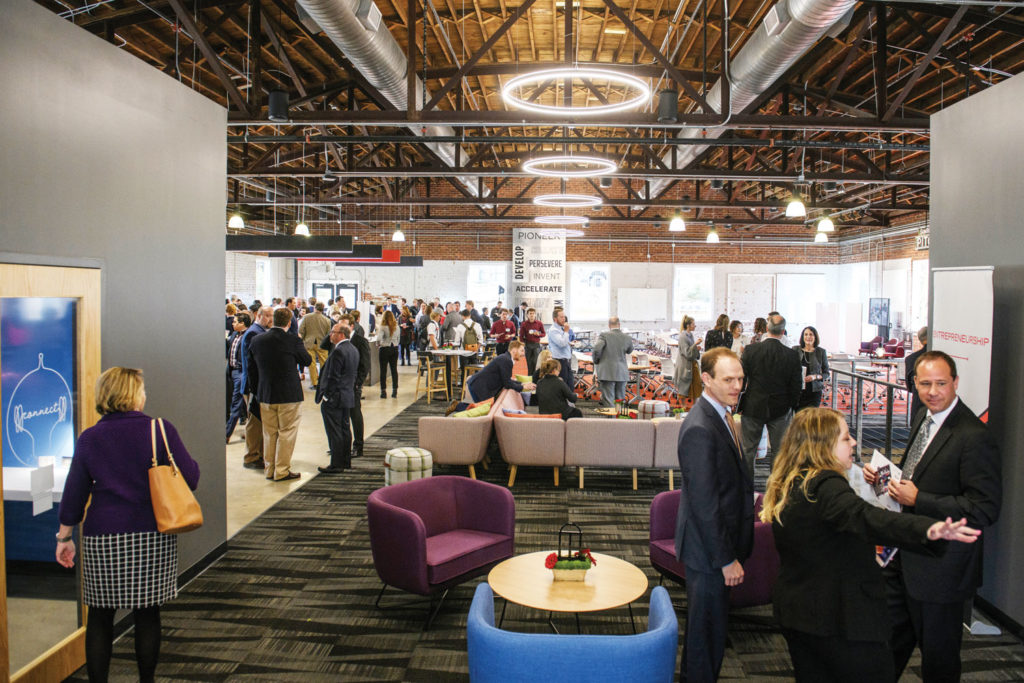 Studio 225, which opened in downtown Athens in March, will serve as the epicenter of student innovation. (Photo by AJ Reynolds.)

Creswell’s Launch Pad isn’t the only new UGA space dedicated to entrepreneurship. The renovated UGA Student Entrepreneurship Center, Studio 225, opened in March and will serve as the epicenter for student innovation. Located at 225 W. Broad St. in downtown Athens, the dynamic 11,000-square-foot space will help students of all majors cultivate original ideas, propel business startups, and engage with industry partners. It will house the Idea Accelerator, office space for faculty in the Entrepreneurship Program and steer students toward an understanding of best practices as they develop their ideas.

“It will be a focal point for supporting the community entrepreneurial ecosystem in Athens,” says Pinckney. “By having a place where people can work alongside each other, even though they may be working on their own projects, it creates an opportunity for what we call ‘serendipitous interactions.’ You might start with one idea then pivot to another because of a conversation you had at the coffee maker. We are all stronger if we are working together.”