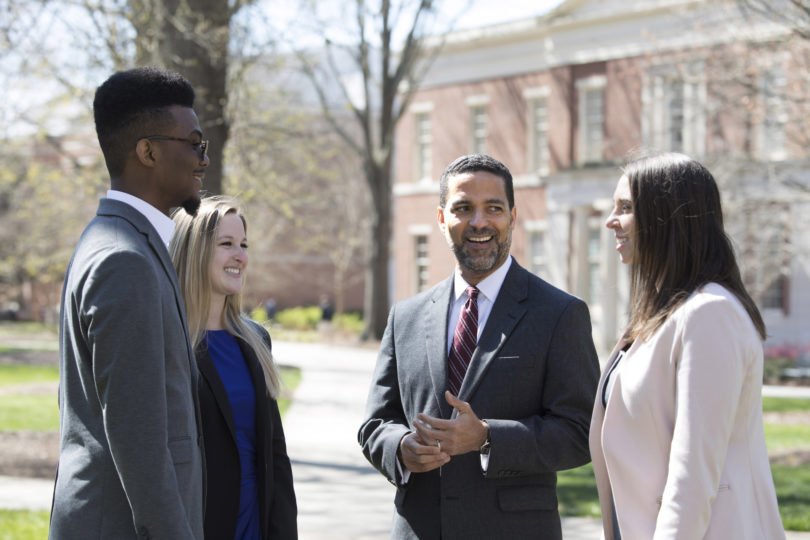 Lonnie T. Brown Jr., the A. Gus Cleveland Distinguished Chair of Legal Ethics and Professionalism in the School of Law, was named a 2019 Josiah Meigs Teaching Professor.

Lonnie T. Brown Jr. “lives by his word” and “teaches by his actions,” and by doing so is setting the bar for instruction at the School of Law.

Brown joined the law school’s faculty in the fall of 2002 and served as its associate dean for academic affairs from 2013 to 2015. Over his 16-plus-year tenure, he has enjoyed a rotating teaching load that includes “Civil Procedure,” “The Law and Ethics of Lawyering,” “Georgia Practice and Procedure” and “Ethics in Litigation.” In 2018, this portfolio of classes placed Brown among the law school faculty with the greatest student-contact teaching hours, according to School of Law Dean Peter B. “Bo” Rutledge.

Brown’s classes are educational and entertaining, but more importantly, they leave students with a strong desire to continue to acquire knowledge, according to former student and now U.S. Bankruptcy Judge Michele J. Kim.

“Each class during the semester was like an act in an award-winning Broadway play: there was a well-thought-out theme; you were presented with a legal issue that served as the plot line; there were many interesting anecdotes and witty remarks; the audience participated enthusiastically; the thought-provoking dialogue and lively banter were timed perfectly (even when totally unexpected questions or remarks were made); and sometimes there was music,” Kim said. “You could not passively sit and watch the day’s lesson. Rather, you were actively engaged in critical thinking that would eventually give rise to a deep understanding of the issues he taught, and at the end of the class you were left wanting to know more.”

This description is amplified by Brown being selected for law school teaching awards for 12 out of his 16 years on the faculty.

Brown’s prowess in the classroom also is supported and enriched by his scholarship, which focuses on legal ethics in the adversary process. He is one of the nation’s leading scholars on legal ethics, authoring numerous articles and papers, chairing major symposia in his field and authoring the book Defending the Public’s Enemy: The Life and Legacy of Ramsey Clark (forthcoming, Stanford University Press).

One of the greatest hopes of any educator is to have a profound and lasting impact on his students, and Brown undeniably is making his mark.

Looking back on his experience as a former student, Assistant U.S. Attorney Thomas Clarkson said, “[P]erhaps the greatest testament to [Brown’s] ability as an educator was his unwavering commitment to the idea that there was a ‘right’ way about conducting yourself. As someone who represents the people of the United States, there is not a single day in my professional life that I do not draw on the lesson I learned from Professor Brown. For those poor souls I supervise … I make clear on their first day that one of the few non-negotiable requirements is that they conduct themselves in accordance with the standard of conduct Professor Brown taught me long ago.”