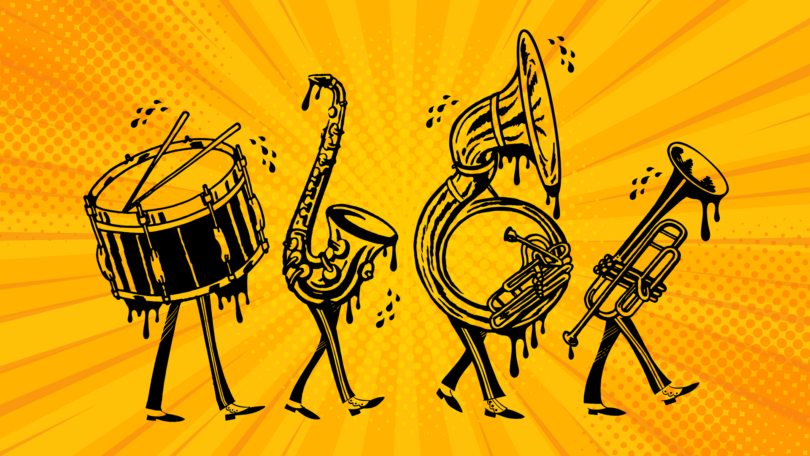 You hear a lot about heat-related illnesses in athletes, especially during the peak of summer high school training camps. Thousands of student-athletes are sidelined by heat illnesses each year, and some don’t recover.

But while guidelines exist to help coaches and trainers keep their students safe, there’s another group on the field that’s still at risk: students in marching bands.

“Think about what they do,” said Andrew Grundstein, a professor in the University of Georgia’s Franklin College of Arts and Sciences department of geography. “They go out there, and they often wear these really heavy wool uniforms. They practice many times for hours and hours outside. Some of them are carrying heavy instruments, and they’re moving around a lot. There are a lot of risk factors that come into play for marching band members that people generally don’t really think about.”

There aren’t national standards for keeping marching band members safe like there are for athletes. And, Grundstein noted, there was no comprehensive study of how often those illnesses occurred and what the affected students were doing.

Working with Rashawn Merchant, an undergraduate in the College of Agricultural and Environmental Sciences and lead author of the study, Grundstein and his team set out to fill that gap.

Published in the International Journal of Biometeorology, this study analyzed news reports of band members suffering heat-related illnesses from 1990 to 2020. It found almost 400 band students who overexerted themselves and became ill due to heat exposure. About half of these students were treated on site and didn’t require hospitalization, but 44% wound up in the hospital for treatment before being released the same day. The others suffered from heat stroke, requiring more than just one day in the hospital.

Because the study relied on data from news reports, it likely underestimated the number of total cases.

Most of the 34 events that caused the heat illnesses were high school-level rehearsals, parades and competitions, including one band event that drew over 30 different bands from Indiana and resulted in 35 heat-caused illnesses. Fifteen of those sick students were taken to local hospitals, and another 20 were treated at the site of the competition. Because there aren’t typically on-field medics for band events, nine ambulances were needed to tend to all the ill students.

At the competition in Indiana, multiple factors made the situation incredibly dangerous. The event started at 1:30 p.m., when the sun’s rays are at their strongest. The bands were in full uniforms and performed on artificial turf, which gets significantly hotter in the summer sun than grass.

And to top it off, the weather that day was both hot and humid, starting at around 87 degrees and rising to above 90 degrees. Skies were clear, so there was no cloud cover to escape the heat.

This is a bare minimum of cases, but it still shows a real problem.” — Andrew Grundstein

Students were in the sun for over an hour before officials finally moved the competition indoors.

“Think about the strain that puts on your medical resources, especially if you’re around small towns,” Grundstein said. “It’s not like it’s Atlanta where you probably have a pretty big base of those health care resources. And you had to call in nine different ambulances.”

How to reduce heat risks for marching bands

To better protect students, schools and organizations can implement similar guidelines to those used in the sports world.

Things like giving students more breaks, encouraging them to drink water throughout practice to stay hydrated and letting them wear lighter-weight clothing for practices would make a big difference.

Heat is going to become a bigger issue over time. … Our paper can raise awareness about this problem so that officials can come up with better safety policies so that we’re more prepared for the future.” — Andrew Grundstein

Gradually increasing the amount of time students practice outdoors over several days, a process called acclimatization, would let their bodies slowly adjust to being in the heat as well.

School officials should also consider safety trainings on how to spot and treat heat-related illnesses.

“In sports, you have an athletic trainer or coaches who receive some training in heat safety,” he said. “They’re keeping an eye on the athletes to make sure they’re doing OK, and they’re trained to spot problems. But the music director of a marching band probably hasn’t had that training.”

The University of Georgia has extensive safety protocols to protect members of the Redcoat Marching Band. Two years ago, the Redcoats adopted a summer uniform of short-sleeved golf shirts and dress pants for games during intense hot spells. They also rotate students out of the stands and into the shade throughout games. The band avoids practicing in the intense heat and builds in breaks for students to stay hydrated. Additionally, the band travels with medical professionals, typically two nurses and two EMTs on warmer game days and more physicians available by phone. There is also an athletic trainer at each rehearsal specifically to help prevent any heat-related illnesses.

Most importantly, the Redcoat handbook specifies that members have the “right and responsibility to decline any instruction that they believe would put them in harm’s way,” said Brett Bawcum, director of athletic bands.

“Heat is going to become a bigger issue over time. We’re already seeing these massive heat waves that hit the western U.S. this year,” Grundstein said. “I think it’s always been a hazard for marching band members, but it’s going to be more of a hazard for all of us. Our paper can raise awareness about this problem so that officials can come up with better safety policies so that we’re more prepared for the future.”