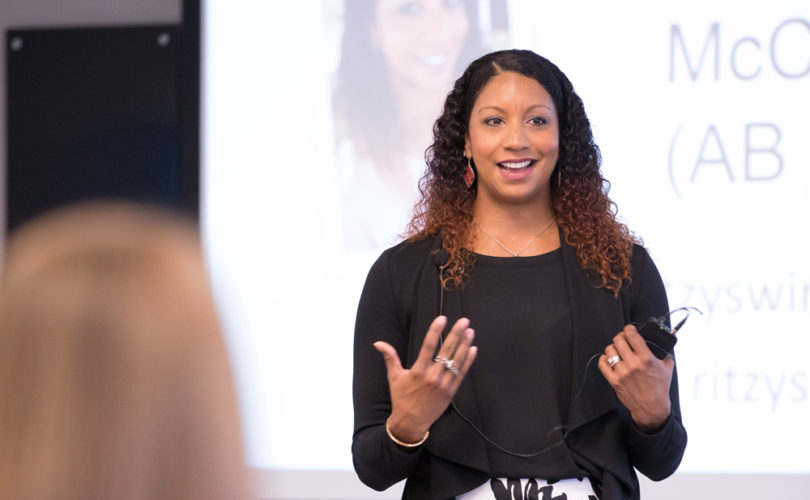 Maritza McClendon AB '05 won 11 NCAA titles as a member of the UGA women's swimming and diving team. In 2004, she became the first African American woman to earn an Olympic medal in swimming. (Photo by Peter Frey/UGA)

Maritza McClendon was destined to compete.

She was born in Puerto Rico and started swimming when she was 6 years old. McClendon swam her first relay race as a fun finish to her first summer of lessons. When she touched the wall, her team was in the lead, but the next girl to swim didn’t dive in. McClendon waited a few moments. Still nothing. With the other teams gaining, she scampered onto the pool deck—and shoved her teammate in.

They won the race.

The rest of McClendon’s swimming career went much more smoothly. A six-time state champion as a high schooler in Florida, McClendon AB ’05 entered UGA in 1999 with a resume as good as any recruit in the program’s history. She didn’t disappoint. During her college career, McClendon won 11 NCAA titles, was a 27-time All-American, and in 2004 became the first African-American woman to make the U.S. Olympic swim team. At the Athens Games, she won silver in the 400-meter freestyle relay.

McClendon brought that silver medal, along with her 100-meter freestyle gold medal from the 2001 Worlds, to a recent installment of the UGA Alumni Association’s Mentorship Mondays. Spearheaded by the Women of UGA affinity group, Mentorship Mondays is a new Atlanta-based professional development series that highlights engaging speakers offering career tips and helps UGA alumnae build their networks.

McClendon told the attendees that a lot of the lessons she learned in the pool have translated to her career outside of it as a senior brand marketing manager at the children’s clothing company Carter’s. Her comments also touched on the themes of the event. “I started watching other athletes, and they mentored me,” she says. “That’s really important, even in the workforce. Networks can help you get to a level that you never expected. You have somebody telling you what worked for them and what didn’t. They can help you through the hardships.”

In her own case McClendon credited her mentor, six-time Olympic gold medalist Amy van Dyken. In 2010, three years after she retired, McClendon became a mentor herself, to a young swimmer from Texas named Simone Manuel. At the 2016 Rio Games, Manuel became the first African-American swimmer to win individual Olympic gold. In a poolside interview, McClendon was one of the people she thanked.

“I had my husband rewind it,” McClendon says, beaming. “Did she just say my name?”

McClendon gives back to her sport in other ways. She volunteers with Swim 1922, a nationwide initiative that offers swim lessons to children of color around the country. And while at a previous position at Nike, she helped design the suit Team USA swimmers wore at the 2012 London Olympics.

“I don’t want to just be a person sitting at the table,” she says. “I want to make a difference in the world.”