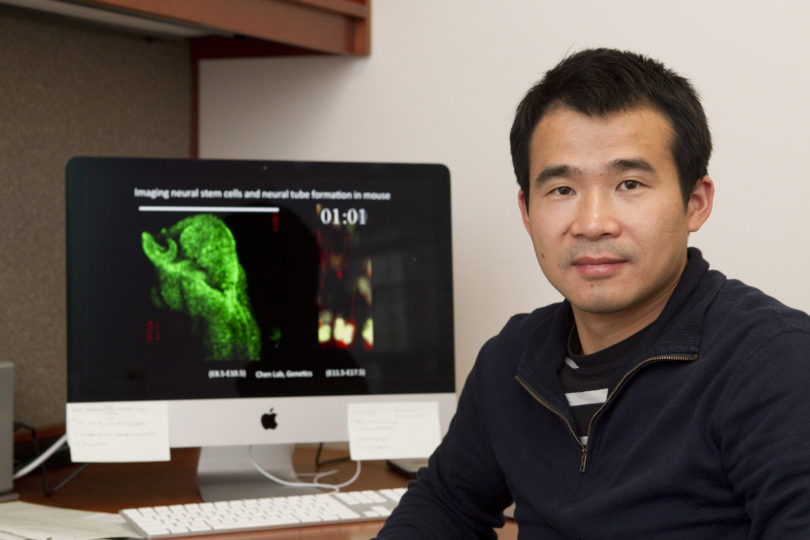 A team of scientists led by researchers at UGA has developed a new mouse model that closely mimics fetal brain abnormalities caused by the Zika virus in humans.

This model, described in a paper published in the journal Development, may help scientists better understand how the Zika virus affects different cell types in the developing brain, which could hasten the creation of new treatments and diagnostics.

Spread mostly by the bite of an infected mosquito, the Zika virus can pass from a pregnant woman to her fetus. This can result in microcephaly, a birth defect in which the brain does not develop properly, resulting in a smaller than normal head.

“A lot of the discussion about Zika has focused on microcephaly, and while that is certainly important, we found that the virus causes additional devastating damages to the developing brain as well,” said Jianfu “Jeff” Chen, an assistant professor of genetics in UGA’s Franklin College of Arts and Sciences.

Most notably, Chen and his colleagues, including postdoctoral fellow Qiang Shao and graduate student Stephanie Herrlinger, found that Zika infection leads to abnormal blood vessel formation in the brain and a leaky blood-brain barrier, which normally protects the brain from potentially harmful pathogens.

“In addition to neural progenitor cell disruption, which is a classical cause of human microcephaly, we also observed massive death of neuronal cells in our mouse model,” Chen said. “This combined with the disruption of the vascular system and the blood-brain barrier results in microcephaly and extensive brain damage.”

Therefore, he added, “It’s not just that the brain is smaller than normal; it is severely injured as a result of the infection, and we need to understand all these effects if we are going to develop successful therapies.”

The researchers created their model by injecting Zika virus that was isolated in Mexico from an infected mosquito into the brain of mouse embryos. They were then able to observe the neurological effects after the mice were born.

“A lot of scientists are looking for postnatal mouse models to study the effects of Zika virus infection, but the virus often causes premature birth in mice,” Chen said. “The virus-infected pups in our model were carried to term, and they were born alive. This is important, because some infected babies were also born alive in humans, and establishing a postnatal mouse model will be a good start to understand potential neurological complications after virus infection.”

Ultimately, the researchers hope that this model will prove useful as researchers around the world work to understand the unique disease mechanisms of the Zika virus and test new therapeutics.