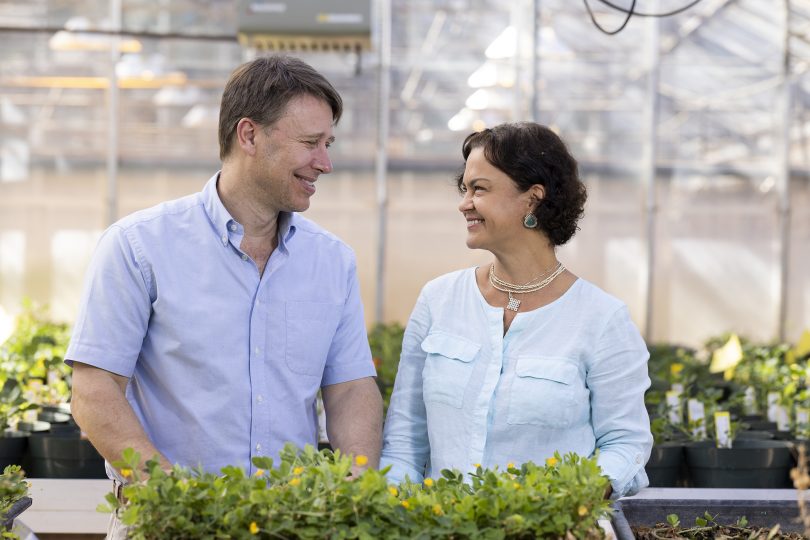 David Bertioli and his wife, Soraya Leal-Bertioli, in their greenhouses at the Center for Applied Genetic Technologies. (Photo by Andrew Davis Tucker/UGA)

The wild relatives of modern peanut plants have the ability to withstand disease in ways that peanut plants can’t. The genetic diversity of these wild relatives means that they can shrug off the diseases that kill farmers’ peanut crops, but they also produce tiny nuts that are difficult to harvest because they burrow deep in the soil.

Consider it a genetic trade-off: During its evolution, the modern peanut lost its genetic diversity and much of the ability to fight off fungus and viruses, but gained qualities that make peanut so affordable, sustainable and tasty that people all over the world grow and eat them.

Modern peanut plants were created 5,000 to 10,000 years ago, when two diploid ancestors (plants with two sets of chromosomes) came together by chance, and became tetraploids (plants with four sets of chromosomes). While domesticated peanuts traveled around the world and show up in cuisine from Asia to Africa to the Americas, wild relatives stayed close to home in South America. 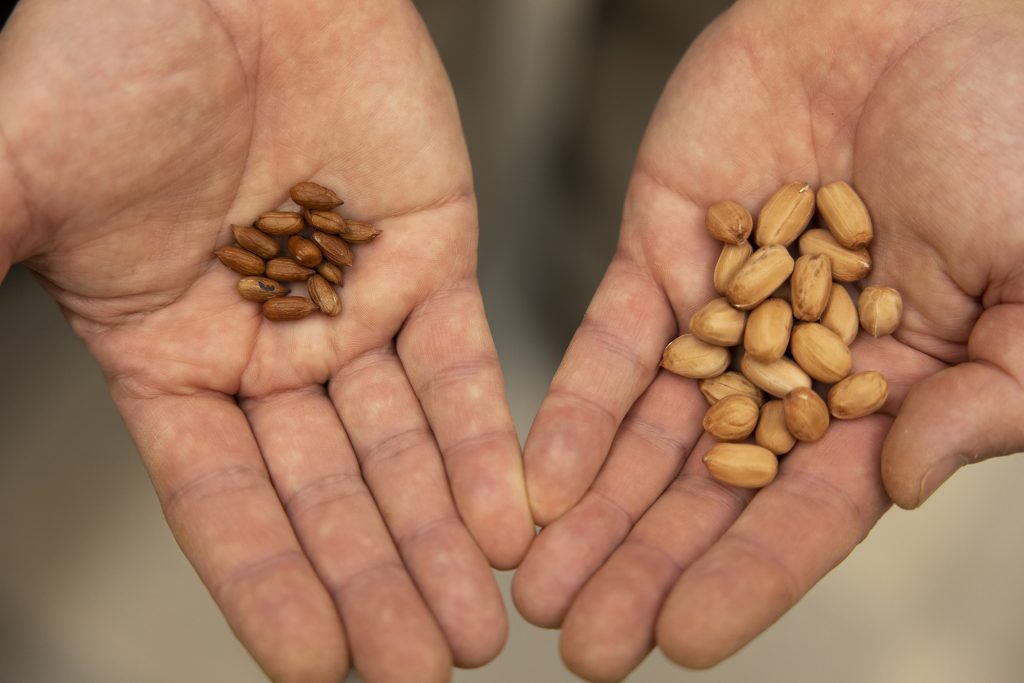 Wild peanut variations in the lab of David Bertioli and Soraya Leal-Bertioli at the Center for Applied Genetic Technologies. (Photo by Andrew Davis Tucker/UGA)

Over the past several years, researchers at the University of Georgia, particularly at the Wild Peanut Lab in Athens, have been homing in on the genetics of those wild relatives and detailing where those resiliency traits lie in their genomes. The goal has always been to understand the wilds well enough to make use of the advantageous ancient genes – the ones the relatives have, but peanut lost – while holding onto the modern traits that farmers need and consumers want.

“Most of the wild species still grow in South America,” said Soraya Leal-Bertioli, who runs the Wild Peanut Lab with her husband, David Bertioli. “They are present in many places, but you don’t just come across them on the streets. One has to have the ‘collector’s eye’ to spot them in the undergrowth.”

Those wild plants can’t breed with peanut in nature any longer because they only have two sets of chromosomes.

“The wilds are ugly distant relatives that peanut does not want to mix with,” Leal-Bertioli said, “but we do the match making.”

Researchers in Athens and Tifton have successfully crossed some of those wild species together to create tetraploid lines that can be bred with peanut. Those new lines will give plant breeders genetic resources that will lead to a bumper crop of new varieties with disease resistance and increased sustainability. The newly released lines won’t produce the peanuts that go into your PB&J tomorrow, but they are the parents of the plants that farmers will grow in coming years. 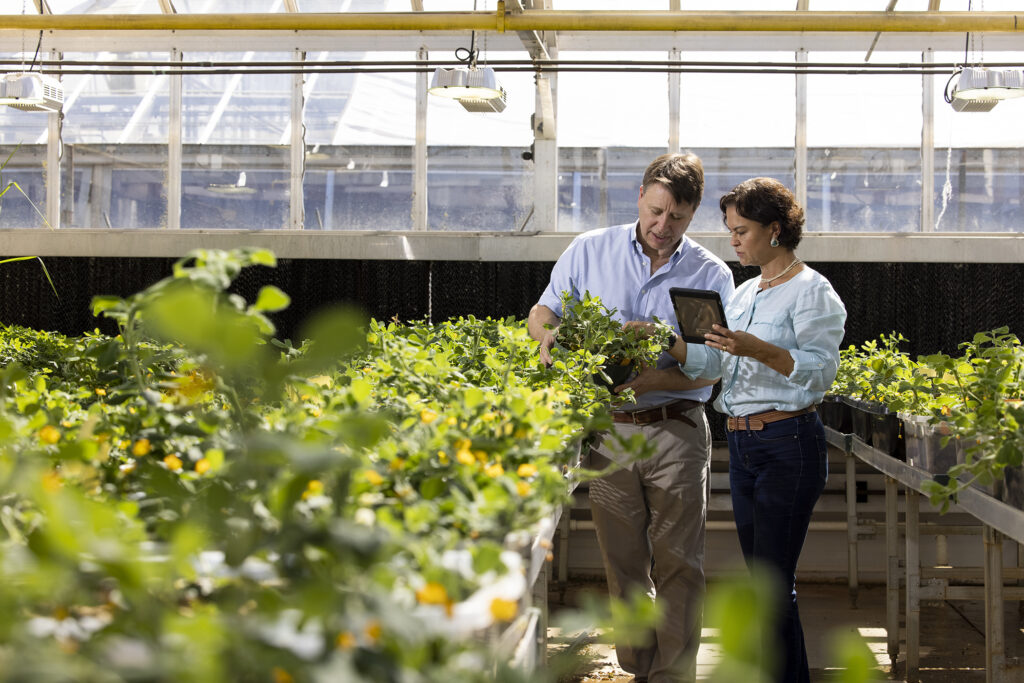 Professor David Bertioli and his wife, Soraya Leal-Bertioli, senior research scientist, work together with peanut plants in their greenhouses at the Center for Applied Genetic Technologies. (Photo by Andrew Davis Tucker/UGA)

The Journal of Plant Registrations published the details about the first of these germplasm lines this month. The lines were created by a team led by the Bertiolis, who conduct peanut research through the College of Agricultural and Environmental Science’s Institute for Plant Breeding, Genetics. They also manage separate global research projects for the Feed the Future Innovation Lab for Peanut, a U.S. Agency for International Development project to increase the global food supply by improving peanut.

The new lines developed by the Bertiolis are resistant to early and late leaf spot, diseases that cost Georgia peanut producers $20 million a year, and root-knot nematode, a problem that few approved chemicals can fight. They are “induced allotetraploids,” meaning they are made through a complex hybridization that converts the wild diploid species into tetraploids.

The second set of new varieties come from work done in Tifton and led by  Ye (Juliet) Chu, a senior research associate in Peggy Ozias-Akins’ lab within the CAES Horticulture Department. These three varieties are made from five peanut relatives and show resistance to leaf spot. One also is resistant to tomato spotted wilt virus, a disease that can destroy the entire crop in peanut varieties without natural resistance.

Creating the first fertile allotetraploids is a challenge, but then scientists can cross them with peanut and, through generations, select for the right traits. Plant breeders will be able to take these lines made from peanut’s wild relatives and cross them with modern domesticated peanut to get the best of both – a plant that looks like peanut and produces nuts with the size and taste of modern varieties, but that has the disease-fighting ability of the wild species.

While plant breeders have known the value of the diversity in wild peanut species for decades, they couldn’t keep track of those valuable wild genes until recently. The peanut industry in Georgia and other states has invested in work to sequence peanut and the two ancestor species, knowing that the work to understand the peanut genome would pay off. With genetic markers developed using the genome, breeders not only can tell that a plant has a desirable trait, they know what genome regions are responsible for that trait and can combine DNA profiling with traditional field selection to speed the complex process of developing a new variety.

“It streamlines everything. You can make a cross, which produces 1,000 seeds, but before planting them, their DNA can be profiled. That way you can see that only 20 of those plants are ideal for further breeding. Forty years ago, you’d have to plant them all, making the process much more cumbersome,” David Bertioli said.

With ongoing work, the Journal of Plant Registration will document the release of other peanut germplasm with resistance to important diseases. Releasing the lines, along with the molecular markers for their advantageous traits, provides the peanut breeding community with genetic resources to produce more resilient crops.

“In the past, we knew where we were going, but it was like everyone drew their own map,” David Bertioli said. “Now, it’s like we have GPS. (Scientists) can tell each other, ‘Here are my coordinates. What are yours?’ And all the data is published.”