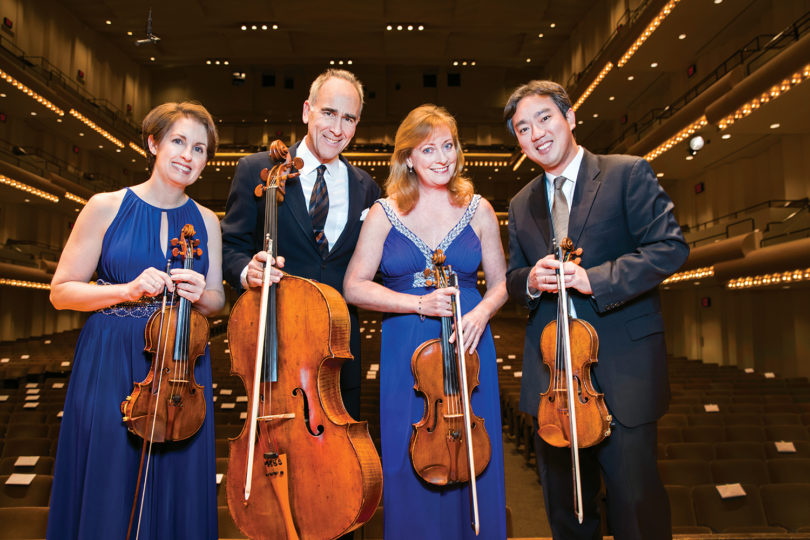 UGA Presents ends its 2018-2019 season with a performance by the New York Philharmonic String Quartet at 7:30 p.m. May 16 in Hodgson Concert Hall. (Photo by Chris Lee)

UGA Presents brings the 2018-2019 season to a close with the Athens debut of the New York Philharmonic String Quartet. The chamber ensemble from one of America’s premier orchestras will perform a program of quartets by Haydn, Shostakovich and Brahms on May 16 at 7:30 p.m. in Hodgson Concert Hall.

The quartet made its debut as the solo ensemble in John Adams’ Absolute Jest in New York in March 2017, reprising the work on the orchestra’s 2017 European tour. The ensemble has since appeared at the Montreal Chamber Music Festival and in a tour of South Korea. All four members are prize winners at international competitions and have appeared as concerto soloists with orchestras around the world.

The quartet’s Athens concert will be recorded for broadcast on American Public Media’s Performance Today, the most popular classical music program in the U.S.

Tickets for the concert start at $30. They can be purchased at the Performing Arts Center box office, online at pac.uga.edu or by calling 706-542-4400. A limited number of discounted tickets are available to current UGA students for $10 with a valid UGA ID (limit one ticket per student).

Hodgson Concert Hall is located in the Performing Arts Center at 230 River Road in Athens.