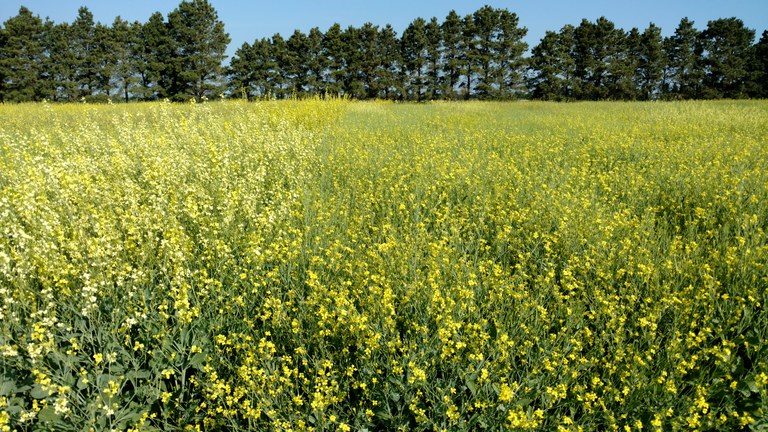 A field of carinata.

Scientists have produced biofuels from corn, switchgrass and even algae, but researchers at the University of Georgia will soon study a new source of renewable biofuels: the lesser-known crop of carinata, also known as “Ethiopian mustard.”

Through a $15 million grant from the U.S. Department of Agriculture’s National Institute of Food and Agriculture, an interdisciplinary public and private partnership will develop production, marketing and sustainable supply chain systems to commercialize jet fuel obtained by refining carinata oil. The project will be led by David Wright at the University of Florida.

The team, the Southeast Partnership for Advanced Renewables from Carinata, will identify and develop varieties of carinata that will thrive in the South and will develop systems to use and market carinata to produce jet fuel, feed for livestock and industrial chemicals while mitigating risks along the entire supply chain. Carinata oil is considered a nonfood oil.

“Carinata provides a climate-friendly, sustainable option for replacing aviation jet fuel in the United States without getting into the debate of food versus fuel,” said Puneet Dwivedi, assistant professor in UGA’s Warnell School of Forestry and Natural Resources. “Carinata is well integrated into the current cropping systems in the Southern region as it grows well in winter months and, therefore, provides much-needed cover to otherwise exposed soils. Additionally, the use of carinata for jet fuels, feed and chemicals will provide increased income to farmers, create local jobs and boost local economies and, thus, will jump-start the bioeconomy in the southern United States.”

Researchers and UGA Cooperative Extension specialists from UGA’s Warnell School, College of Agricultural and Environmental Sciences and College of Engineering will play a key role in the project and will receive $2 million in grant funding over the next five years.

UGA faculty working on the SPARC project will tackle a wide variety of projects associated with the larger effort.

Bill Hubbard, Southern Regional Extension forester with Southern Regional Extension Forestry, will lead on the overall project. Daniel Geller, public service associate in the engineering college, and Greg Colson, associate professor of agricultural and applied economics in CAES, will work with Cooperative Extension personnel and farmers in Alabama, Florida and Georgia to develop on-farm research relationships with row crop farmers and build the knowledge base of Extension agents working with carinata farmers.

They will leverage existing producer networks to organize trainings and educational events and develop Extension and workforce training materials that will be used support training efforts.

Woo Kim, assistant professor of poultry science in CAES, will assess the efficiency of the carinata meal-a byproduct of carinata oil production-as feed for broiler production.

Brian Bledsoe, Georgia Athletic Association Professor of Civil and Environmental Engineering in the UGA engineering college, will develop hydrology models for the proposed production area that will project the effects of carinata production on water supplies and runoff quality and quantity.

“SPARC is part of a larger public and private effort to jump-start the bioeconomy of the Southeastern United States,” Dwivedi said. “Carinata is on the verge of success as it is already being used for manufacturing drop-in jet fuel, and we sincerely hope that, by the end of the fifth year, we have established a much-needed supply chain so that there are commercial flights crisscrossing the national and international skies using carinata-based jet fuel obtained from a farm in the rural South.”

For more information about the SPARC’s research and outreach activities, visit sparc-cap.org.