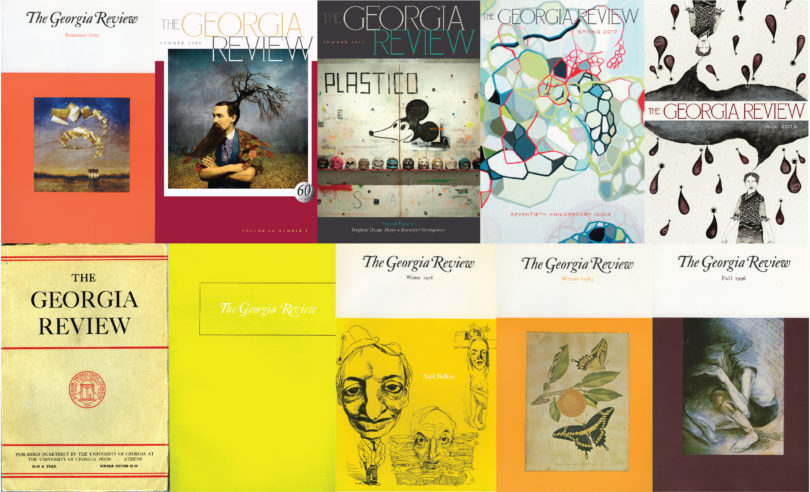 Cover me! In more ways than one, The Georgia Review, the university's renowned literary magazine, is a work of art. (Photo illustration by Jackie Baxter Roberts/UGA)

Following the retirement of longtime editor Stephen Corey, The Georgia Review, UGA’s award-winning literary magazine, is entering a new phase. Meet the creative team guiding the publication through it.

She’d been close to it before. As a doctoral student in English at UGA, Bartunek PhD ’14 served as a graduate assistant for The Georgia Review, the university’s literary magazine. For two years, she edited copy, read submissions for The Review’s four annual issues, and learned a lot about a manuscript’s journey through the editorial process.

Then, she graduated and moved on.

In early 2018, the managing editor’s position at The Georgia Review came open. Bartunek, who was teaching college English, didn’t hesitate. She applied and was hired that June.

“Opportunities like this don’t come along often. It was just a dream job for me as a writer and an editor and as someone who is interested in what’s 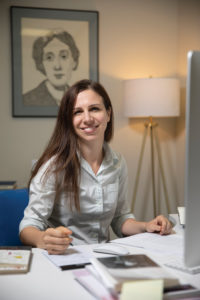 “[The Georgia Review] is just a dream job for me as a writer and an editor and as someone who is interested in what’s happening in the world of literature right now.” — CJ Bartunek, managing editor, The Georgia Review (Photo by Peter Frey/UGA)

happening in the world of literature right now,” says Bartunek, a North Dakota native who is very happy to be in Athens. “Some of my professors and classmates are now UGA colleagues, and that’s a nice bonus.”

“One of the things that I think is exceptional about a print journal is that it is capable of cultivating a community that is more mobile and long-lasting than what the internet can do,” says editor-in-chief Gerald Maa, who is even newer to The Review than Bartunek. The magazine’s Winter 2019 issue is his first in the editor’s chair. Before coming to The Georgia Review, he had served as editor-in-chief of the Asian American Literary Review, a Washington, D.C.-based publication he co-founded in 2009.

“There are poets and fiction writers exploring exciting areas,” Maa continues. “And when I seek out writers, it’s to say, ‘I see this conversation you are starting. We need to provide more space for it. Let us help you out.’”

Bartunek is one of several staff members who have joined The Georgia Review within the last two years, and they are continuing the legacy of one of the country’s most popular and well-respected academic literary magazines.

The Georgia Review was founded in 1947 by John Donald Wade AB 1914, a UGA English professor and descendent of Georgia’s first governor. After graduating from UGA, Wade earned his master’s at Harvard, served as an officer in the Army during World War I, and then got his doctorate at Columbia. He started the graduate programs in literature at both UGA and Vanderbilt and founded The Georgia Review in part to address what he saw as the “sad and swift submergence” of college graduates’ intellectual vitality.

In its early years, The Reviewfocused on highlighting Georgia writers, but beginning in the late 1970s, under the leadership of editor and UGA English professor Jim Colvert, the publication expanded its scope by highlighting national and eventually international writers and artists. The Reviewhas twice won the top prize at the prestigious National Magazine Awards competition, and many writers aspire to be published in it.

They certainly work hard to get in. 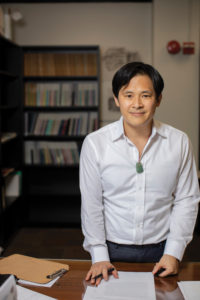 Gerald Maa co-founded the Asian American Literary Review in 2009. The Winter issue of The Georgia Reviewwill be his first as editor-in-chief. (Photo by Peter Frey/UGA)

Each year, staff sift through some 10,000 poetry, fiction, and essay submissions of which fewer than 100 will be published. That so much more good writing exists than there is space to publish makes the job tough for the editors. Every single manuscript is read, and many are discussed at length. Reading so much copy can cause eyes to cross and typeface to pulsate, but the editors love the work.

Most art features are solicited, with a focus on emerging artists. For instance, shortly after Colombian-born artist María Berrío was featured in the Spring 2019 issue, a solo exhibition of her work premiered in the Kohn Gallery in Los Angeles, followed by a group exhibition at the Victoria Miro Gallery in London. Copies of The Review were on hand in both locations.

The community that Maa describes transcends The Review’s print presence. The Review’s event schedule is one of the most robust on campus. Readings and other arts performances celebrate the release of each issue. Since 2009, The Review has co-sponsored an Earth Day celebration with several other programs and departments on campus and the State Botanical Garden of Georgia. Another highlight of each year is the announcement of The Review-sponsored Loraine Williams Poetry Prize.

The prize has become highly prestigious, and it draws literary royalty to Athens. Pulitzer Prize-winning poet and the 19th Poet Laureate of the United States Natasha Trethewey AB ’89 was a judge for the 2018 competition and a speaker at the event honoring the prize recipient, Ama Codjoe.

Taking the lead on planning events and outreach is another new staff member, marketing and circulation manager, Kyla Sterling. Like Bartunek, she came to The Review in 2018.

“We have folks who have been subscribers for 20 years. The Georgia Review is part of their lives,” Sterling says. “We occupy a very special place in their hearts, and it’s a privilege to be able to produce something that we know will have that kind of lasting impression.”

Indeed, much of that history is embodied by longtime editor Stephen Corey. He held that title since 2008 and began his career at the publication back 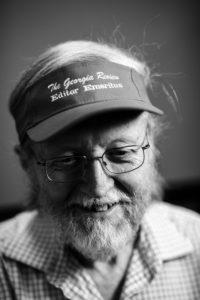 “To be entrusted with passing judgment on artistic creations–in my life, on poems, stories, and essays–is no small thing” — Stephen Corey, editor emeritus, The Georgia Review (Photo by Peter Frey/UGA)

in 1983. The Fall 2019 issue was his final with The Review and included a goodbye essay, a postscript, as it was titled, to readers upon his retirement. It was one part thank you to readers, one part an acknowledgment of his hypercritical eye, and one more part understanding the gravity of the role he played for the better part of three decades.

“To be entrusted with passing a judgment on artistic creations—in my life, on poems, stories, and essays—is no small thing, at least to my way of thinking; so, no matter how strong my reactions may be to a piece of writing, whether strong positive (or much more commonly) strong negative, I have to recognize the inner circle where I am being allowed, being privileged, to stand,” he wrote.

That understanding of privilege, mixed with a healthy dose of excitement, is not lost on the staff responsible for leading The Georgia Review into a new era.

“It’s been a joy to work here,” Bartunek says. “We receive so much amazing writing, and it means a lot to have a hand in helping present it to the world.”

She pauses, searching for the right conclusion.

“Every issue becomes my favorite.”

Give the gift that lasts all year! Subscribe to The Georgia Review.