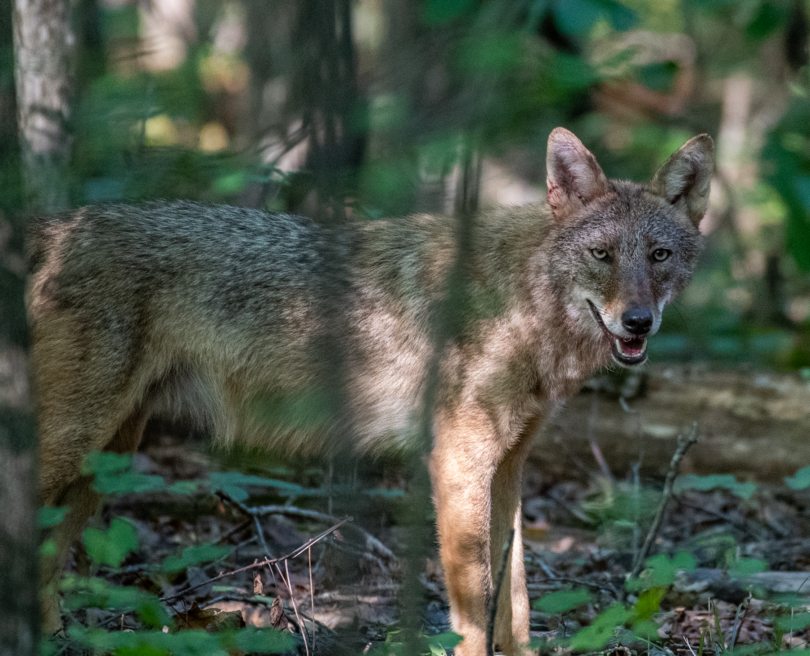 A coyote in Stone Mountain. (Photo courtesy of the Georgia Department of Natural Resources)

In late March, as communities began to issue shelter-in-place orders, it seemed animals came out of hiding.

Across the globe, reports began to surface of wildlife taking to the newly deserted streets. Even in Georgia, people reported foxes in shrubbery, yips of coyotes or, in one case at the University of Georgia, deer walking across campus. But were animals relishing in fewer humans around, or were we just noticing them more?

As it happens, data collected for a study on wildlife behavior around metro Atlanta may provide some insight. Wildlife cameras set up by researchers at the University of Georgia’s Warnell School of Forestry and Natural Resources and biologists from Georgia’s Department of Natural Resources point to a possible uptick in daytime wildlife sightings that may correspond with stay-at-home orders.

While the researchers didn’t set out to record animal movements during a global pandemic, their 30 wildlife cameras set up from February through April did just that.

“We’d been starting to monitor and look at behavior of wildlife in urban Atlanta to better understand how they behave, which is often very different than rural animals. If we can better understand the behaviors of both people and wildlife, we can better guide management and education efforts in the urban landscape,” said Michel Kohl, an assistant professor of wildlife management and wildlife Extension specialist for Warnell.

“All of a sudden, this pandemic happens, and we see this massive switch in human behavior that, across the globe, has led to anecdotal evidence that wildlife are responding quite quickly,” he said. “Now, we have this data that we can dig into and see, maybe, if we saw something similar as Georgia shut down and then started to pick back up.”

Although Kohl and Benjamin Carr, a fourth-year Warnell student assisting with data collection and video analysis, have only begun looking into the data, it appears that wildlife responded.  At the beginning of the study, around mid-February, cameras were recording a daytime wildlife sighting about every other day. But by late March, as more people began to limit nonessential trips, they were capturing more and more videos during the day.

How this directly relates to the COVID-19 shutdown is still not clear, but it’s something Kohl and his team will dig into in the coming months.

“Our hope is to pair this information with direct measures of human use across the landscape to see how in tune wildlife are with their society,” says Kohl. Data from cellphones and other measures of human social distancing can help answer these questions, and additional data might be available from wildlife cameras set up in other parts of the country. 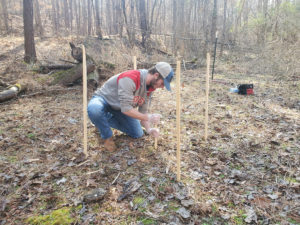 Fourth-year University of Georgia student Benjamin Carr sets posts into the ground as part of a research project to understand more about how coyotes adapt to urban environments. (Submitted photo)

The metro Atlanta cameras were part of a study on coyote behavior in urban environments. With assistance from organizations such as Fernbank Museum of Natural History and the Quality Deer Management Association, cameras were placed in urban and rural areas stretching from DeKalb, Fulton and Gwinnett counties all the way to Elberton in Northeast Georgia. When an animal walked in front of one, it would record a 30-second video of wildlife behavior as evidence. Half of the cameras were set up with an object meant to be unknown to coyotes—four small posts set into the ground, surrounded by rope and baited for coyotes.

The study, supported in part by the USDA’s National Wildlife Research Center, is part of an international project, spanning sites in Canada, the United States and Mexico, that aims to understand more about how urban coyotes navigate their world and adapt to urban landscapes. Typically, coyotes would approach the unknown object with apprehension and even fear, said Kohl. But urban coyotes can be seen on daytime camera footage nonchalantly trotting right by, barely noticing it.

This information is important for wildlife managers such as Kaitlin Goode, program manager for Georgia DNR’s new Urban Wildlife Program. The program provides assistance and education to nine metro Atlanta counties, with the goal of resolving conflicts with wildlife, preventing conflicts before they start and promoting better wildlife habitat and conservation in backyards.

“The majority of wildlife conflicts can be resolved by removing food sources and understanding why wildlife do what they do,” Goode said. “Collaborating on research to understand how wildlife behave in an urban environment helps us provide residents with the best advice for resolving conflict.”

She adds, too, that the Urban Wildlife team, which regularly receives calls about human-wildlife interactions, didn’t notice an increase in conflict reports during this time period. And Kohl notes that in spring, animals are also on the move which could also explain the uptick in camera videos.

That’s because the camera data represents daytime wildlife sightings from all the research team’s cameras and doesn’t yet account for sites where there may be large numbers of certain animals. “This is squirrels, deer, coyotes, turkeys and whatever else we find,” Kohl said. Regardless, the relationship between stay-at-home orders and wildlife sightings suggests an intriguing trend that they plan to continue investigating.

Whether or not animals were more active during stay-at-home orders, Kohl and Goode agree that it’s an opportunity to better understand wildlife populations in urban areas. It’s important, said Kohl, to consider the entire population of a species, not just individual animals.

“People think about deer in their backyard, but that’s just one data point on an urban landscape, and it’s one animal in a larger population,” said Kohl. “When we assemble data about what all animals are doing across the entire urban landscape, we can better understand wildlife populations and their behavior. This means we can more efficiently manage and conserve wildlife, which in turn improves the quality of life for both humans and the wildlife.”