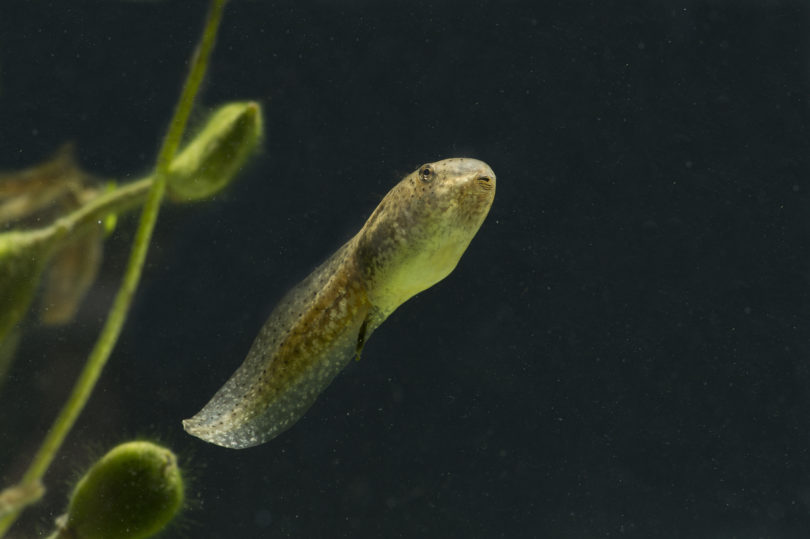 Tadpoles can be used to measure the amount of radiocesium, a radioactive material, in aquatic environments, according to new research from University of Georgia scientists.

Whether from nuclear accidents, global fallout from weapons testing, or production of nuclear energy, tadpoles could be used to determine the extent and severity of radioactive contamination.

James C. Leaphart, lead investigator on the 32-day study, evaluated the rate at which the environmental pollutant radiocesium, a byproduct of nuclear production, accumulated through time in bullfrog tadpoles.

Taken from an uncontaminated wetland, the tadpoles were placed in various locations in a canal on the U.S. Department of Energy’s Savannah River Site, a former nuclear production facility. The canal received releases of radiocesium from a nearby reactor from 1954 to 1964.

“Due to the rapid accumulation of radiocesium in these tadpoles, how much they accumulated and their inability to leave aquatic systems before metamorphosis, these tadpoles are excellent indicators of the bioavailability and distribution of radiocesium in the system,” said Leaphart, graduate student at the Savannah River Ecology Laboratory and Warnell School of Forestry and Natural Resources.

According to the study results, published in the Journal of Environmental Radioactivity, bullfrog tadpoles reached what the researchers describe as maximum threshold, or the point at which their uptake of the contaminant stopped, between 11 and 14 days.

This accumulation rate was significantly faster than rates recorded for waterfowl and fish, species previously studied for uptake of the contaminant, according to Leaphart. Rates in these species varied significantly, with a range of 17 to 175 days.

James Beasley, Leaphart’s adviser and associate professor at SREL and Warnell, said how quickly a species reaches the threshold level of accumulation is vital in determining its use as a biomonitor of the contaminant.

“If it takes a long time to achieve the threshold level, factors like animal movement and changes in diet can play a role in influencing the results,” he said.

Tadpoles are more likely to reflect local contamination levels, according to Beasley. That’s because factors like movement and changes in food availability will not have as much of an impact on an individual’s exposure compared to species that may take several weeks or months to achieve maximum levels.

“Isolation is key,” Leaphart said. “Tadpoles spend the first portion of their lives in aquatic systems—canals, wetlands and ponds—foraging on plants, algae, insect larvae and sediments where radiocesium has a tendency to bind.”

Understanding radiocesium accumulation patterns in amphibians is important, the researchers said, because they have the potential to transfer contaminants within food webs as well as disperse aquatic contaminants into terrestrial ecosystems following metamorphosis.

Additional authors on this research include Kaitlin C. Wilms and A. Lawrence Bryan of the University of Georgia Savannah River Ecology Laboratory.

Read more about the study online.