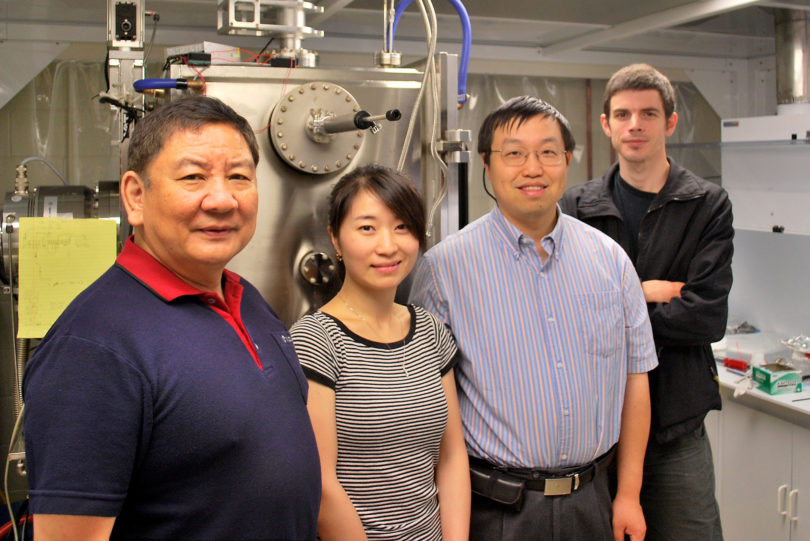 Athens, Ga. – Using nanoscale materials, researchers at the University of Georgia have developed a single-step method to rapidly and accurately detect viruses, bacteria and chemical contaminants.

In a series of studies, the scientists were able to detect compounds such as lactic acid and the protein albumin in highly diluted samples and in mixtures that included dyes and other chemicals. Their results suggest that the same system could be used to detect pathogens and contaminants in biological mixtures such as food, blood, saliva and urine.

“The results are unambiguous and quickly give you a high degree of specificity,” said senior author Yiping Zhao, professor of physics in the UGA Franklin College of Arts and Sciences and director of the university’s Nanoscale Science and Engineering Center.

Zhao and his co-authors—doctoral students Jing Chen and Justin Abell and professor Yao-wen Huang of the UGA College of Agricultural and Environmental Sciences—used nanotechnology to combine two well-known techniques and create their new diagnostic test. Their results appear in the early online edition of the journal Lab on a Chip and were recently presented at the SPIE Defense, Security and Sensing conference.

The first component of their two-in-one system uses a technique known as surface enhanced Raman spectroscopy, or SERS, which measures the change in frequency of a laser as it scatters off a compound. Every compound displays a series of distinctive changes in frequency, or Raman shifts, that are as unique as a fingerprint. The signal produced by Raman scattering is inherently weak, but Zhao and his colleagues have arrayed silver nanorods 1,000 times finer than the width of a human hair at a precise angle to significantly amplify the signal. In previous studies with Ralph Tripp in the UGA College of Veterinary Medicine and chemist Richard Dluhy in the Franklin College, they demonstrated that the use of SERS with silver nanorods could identify viruses such as HIV and RSV isolated from infected cells.

“In a clinical setting, the sample that you obtain from patients typically contains bacteria or viruses as well as a lot of fluid—as in blood, urine or saliva—that contains biological agents that interfere with the signal you’re trying to detect,” Zhao said. “To develop a diagnostic that could be used at the point of care, we needed a way to separate those agents.”

Once again, the scientists turned to nanotechnology to create a next-generation diagnostic test. Using traditional thin layer chromatography, or TLC, scientists blot a drop of sample onto a porous surface. They then apply a solvent such as methanol to the sample, and the sample components separate based on how strongly they’re attracted to the solvent and the surface.

Study co-author Justin Abell, a doctoral student in the UGA College of Engineering, explained that TLC typically requires a large sample volume because the compound of interest soaks into the surface in addition to moving along it, like a stain on a rug. The silver nanorod surface that the researchers use, in contrast, allows them to use a miniscule amount of sample in a technique known as ultra-thin layer chromatography.

“In our case, the nanorods are acting as the detection medium but also as the separation medium,” Abell said, “so it’s a two-in-one system.”

To test their method, the researchers used mixtures of dyes, the organic chemical melamine, lactic acid and the protein albumin. In each case, they were able to directly identify the compounds of interest, even in samples diluted to concentrations below 182 nanograms per milliliter-roughly 200 billionths of a gram in a fifth of a teaspoon. And while the detection of viruses using techniques such as polymerase chain reaction can take days or even weeks and requires fluorescent labels, the on-chip method developed by the UGA researchers yields results in less than an hour without the use of molecular labels.

The researchers are currently testing their technique with biological samples from Tripp’s lab that contain viruses, and Zhao said preliminary results are promising. He adds that while his team is focused on health and food safety applications, SERS and ultra-thin layer chromatography can be used to detect compounds of all types—everything from forensic materials at a crime scene to environmental pollutants. His team also is working with colleagues across campus to create an online encyclopedia that would allow technicians to identify viruses, bacteria, biomarkers and pharmaceuticals based on their distinctive Raman shifts.

“Every compound has a unique SERS spectrum,” Zhao said, “so this is a very robust technology whose applications are practically endless.”

The research was supported by the U.S. Department of Agriculture, the National Science Foundation and the UGA College of Agricultural and Environmental Sciences.