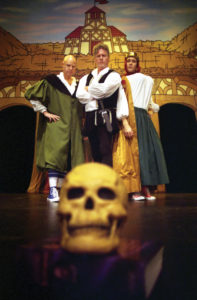 See all of Shakespeare’s comedies, histories and tragedies in 97 minutes when the Reduced Shakespeare Company takes the stage at the Fine Arts Theatre on Oct. 5 at 7:30 p.m.

UGA Presents is bringing the Reduced Shakespeare Company to the Fine Arts Theatre to perform The Complete Works of William Shakespeare (Abridged) [Revised]. The irreverent show covers all of Shakespeare’s comedies, histories and tragedies in one hilarious 97-minute performance. The madcap men in tights will take the stage Oct. 5 at 7:30 p.m.

Since its pass-the-hat origins in 1981, the Reduced Shakespeare Company has created 10 stage shows, two television specials, several failed TV pilots and numerous radio pieces, all of which have been performed, seen and heard the world over. The company’s itinerary has included appearances off Broadway, at the White House, the Kennedy Center, Lincoln Center, London’s West End and Montreal’s famed Just For Laughs Festival, as well as performances in Israel, Australia, Hong Kong, Japan and Singapore.

The RSC won the Shorty Award in New York City and the Delft Audience Award in Holland. The company also has been nominated for an Olivier Award in London, two Helen Hayes Awards in Washington, D.C., the San Francisco Bay Area Theatre Critics Circle Award and several podcast awards.

Tickets for the show start at $40 and can be purchased at the Performing Arts Center box office, online at pac.uga.edu or by calling 706-542-4400. A limited number of discounted tickets are available to current UGA students for $6 to $10 with a valid UGA ID (limit one ticket per student).

The Fine Arts Theatre is at 255 Baldwin Street in Athens. The Performing Arts Center box office is at 230 River Road.