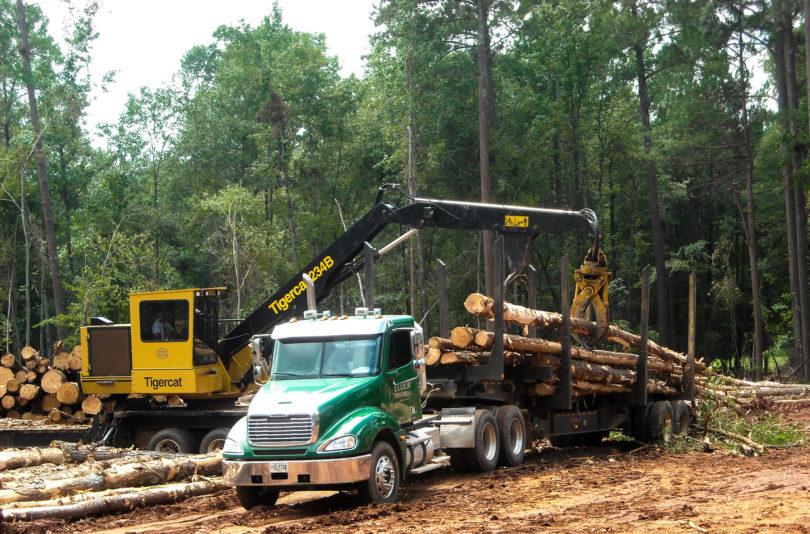 A knuckleboom loader places pulpwood on a log truck in central Georgia. New research by a University of Georgia professor identifies safer routes for log trucks by incorporating federal highways—an option currently prohibited due to weight restrictions.(Photo by Joseph Conrad)

Allowing interstate travel would provide many benefits for timber industry

Logging trucks crisscross roads across the southeastern United States every day, bringing more than 200 million tons of timber from forests to mills every year.

Every mile they travel adds to the overall cost of the timber—and current federal weight laws prevent log trucks from using interstate highways. Now, University of Georgia research is measuring the benefits of shifting log trucks from back roads to interstate highways: safer routes that take logging trucks off local roads, minimize wear and tear on these roads, and cost savings for timber producers.

“The federal government sets weight limit laws for the interstates, which have been in place since 1974,” said Joe Conrad, assistant professor of forest operations at the UGA Warnell School of Forestry and Natural Resources. “So, the goal of the research was, if you made the weight limit the same on interstate and state highways, would it improve the efficiency of our timber transportation industry? The results were a resounding yes.”

In Georgia, the weight limit on state and U.S. highways is 84,000 pounds total, including 48,300 pounds per two axles (including state weight tolerances)—limits that allow logging trucks to haul their loads to mills that are often located in metro areas. But on interstate highways, log trucks are limited to 80,000 total pounds, including 34,000 pounds per set of axles.

This means logging trucks have to stay off the interstate highways. And, this poses an issue when timber is delivered to mills.

“Many of Georgia’s large mills are located in Macon, Augusta, Savannah, Brunswick—relatively large areas,” Conrad said. “So, they have to drive through downtown Macon, for example, to get to the paper mill there. Plus, you have pedestrian movement.

“It’s needlessly unsafe for them.”

He compared routes traveled by logging trucks and how their route might change if they were allowed on the interstate. His research found that, on average, nearly half of the trucks’ routes could be over the interstate instead of on local roads. When you take into consideration that 25% of the delivered cost of pulpwood is in its transportation to the mill, the cost savings begin to add up.

Conrad and his team compared the routes by counting intersections, school zones and other potential hazards between the forest and the mill. Across the eight areas, he said, when log trucks used the interstates, they could reduce the number of stoplights they encounter by 33% and avoid one school zone per trip.

Empty log trucks are allowed to travel on interstates, and Conrad’s research found that fewer than 5% of log truck accidents took place there. But at the same time, 40% of truck wrecks took place within 5 miles of an interstate. The data suggests, said Conrad, that if these trucks were moved to the interstate, some of these crashes could be avoided.

“As you know from traveling the interstate, it’s usually faster than traveling the back roads. So, I found the interstate was quicker by about eight minutes per trip, from the routes we looked at. If you think about all the loads of timber that are moved every year, that adds up real quick,” said Conrad. “Trying to drive a log truck through Augusta is pretty slow and hazardous, so in addition to it being a lot safer, bypassing the city on the interstate would reduce fuel consumption, lower C02 emissions, and cause less damage to the pavement, because interstate highways are engineered to a higher standard than state and U.S. highways.”

This is something log truck owners have been saying for years, he added, but until now there hasn’t been any data to back it up.

Applying state weight limits to interstate highways requires federal legislation, but it’s difficult to make changes without data to support it. Now, though, this research has the potential to inform proposed legislation such as the Safe Routes Act, co-sponsored by Rep. Sanford Bishop (D-GA). Introduced into Congress last year, it would allow logging trucks that meet state-determined requirements to travel up to 150 miles on interstates.

“I’m glad to have a role in research that has the potential to inform public policy,” added Conrad. “This is an important issue that affects public safety and the efficiency and competitiveness of one of Georgia’s most important industries.”