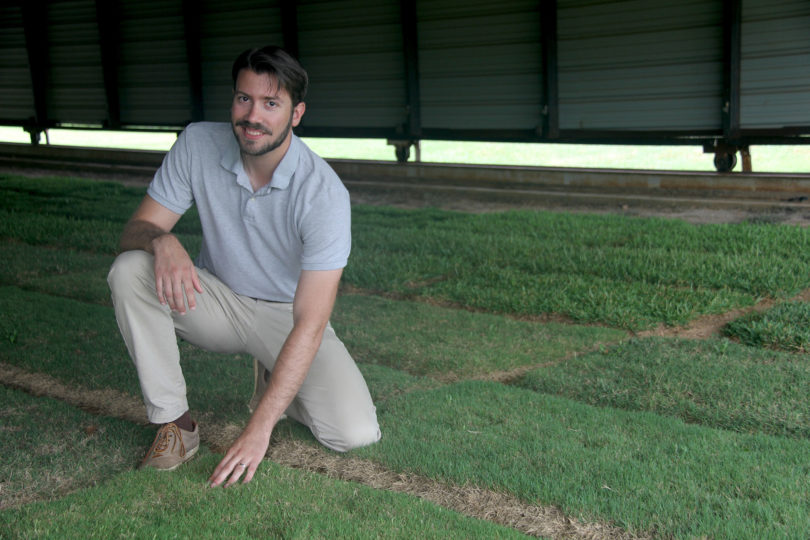 Like most college students, David Jespersen was unsure of what he wanted to study. At first, he was intrigued by psychology, but the required biology and science classes drew him to plant sciences. As a result, he’s now the newest member of the College of Agricultural and Environmental Sciences’ turfgrass research team.

“Something about the plant sciences grabbed my interest as being practical and underappreciated,” said Jespersen, who now conducts research on the UGA campus in Griffin.

Jespersen earned a doctorate in plant biology with an emphasis in turfgrass physiology from Rutgers University in New Brunswick, New Jersey.

A native of New Jersey, Jespersen is adjusting to life in the South and the relentlessly intense heat of Georgia summers.

“Summers (in New Jersey) are kind of hot. It hits the 90s (degrees Fahrenheit) and there’s an occasional heat wave hitting 100 (F),” he said, just a few days after sharing his research results in humid, near-100-degree weather at the outdoor UGA Turfgrass Field Day, a research event held biennially in August.

He is also adjusting to working on a smaller extended university campus.

“Everyone on the Griffin campus is very friendly, but it’s not as lively as a large campus,” he said. “It’s definitely a lot easier not to get distracted and to focus on research.”

Ninety percent of Jespersen’s time will be spent conducting research, with 10 percent allotted for teaching.
At Rutgers, he enjoyed being a teaching assistant and head teaching assistant for general biology laboratory classes.
Jespersen was hired to fill the position of retired turfgrass physiologist Bob Carrow based in part on his research on the effects of heat stress on creeping bentgrass.

“(Creeping bentgrass) is one of the most widely grown grasses for golf courses, and it’s one of the preferred grasses because of its fine texture,” he said. “A huge majority of golf courses in the Northeast use it, and a decent amount of courses in Georgia have it because it has a higher quality that golf course superintendents are looking for. You just have to baby it a lot more, especially in the summer.”

While at Rutgers, Jespersen worked on a collaborative project with UGA CAES turfgrass breeders Paul Raymer and Brian Schwartz. Together they screened a collection of creeping bentgrass varieties for heat and drought resistance. Their research will aid in the development of new turfgrass varieties that can thrive better in
Georgia summers.

As the new UGA CAES turfgrass physiologist, Jespersen’s focus is on abiotic stresses.

“I’m looking at the effects of drought, heat, salinity and environmental stresses on turfgrasses to understand which turfgrasses are more tolerant. Then I’ll determine which underlying mechanisms are responsible for those traits,” he said.

Once Jespersen finds these resistant plants, he will share his findings with UGA turf breeders, like Raymer and Schwartz.

“These are experimental turfgrass varieties, so they may be aesthetically unappealing or lack other traits you want, but have some beneficial traits that can be combined with other grasses to create a superior grass,” he said.