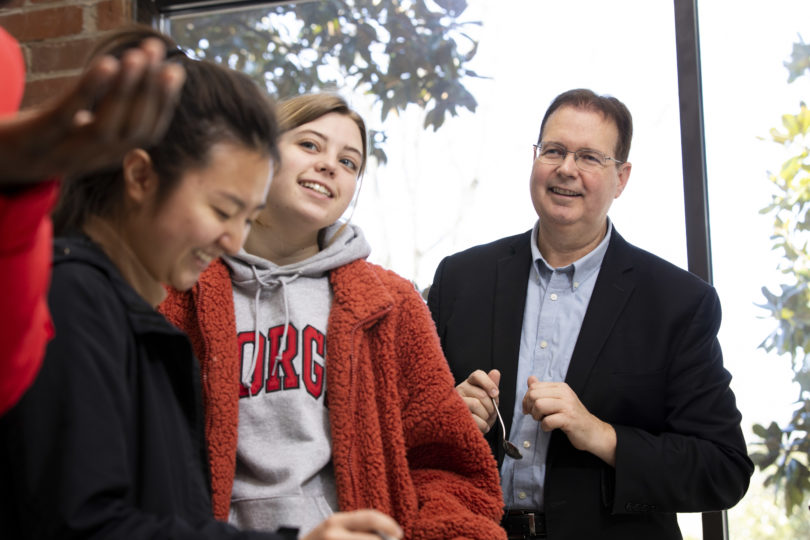 Ronald Pegg, professor of food science technology in the College of Agricultural and Environmental Sciences, was named a 2019 Josiah Meigs Teaching Professor.

Whether food scientist Ronald Pegg is chasing coffee “from bean to cup” in Costa Rica or pinpointing the phenolic antioxidant constituents in Georgia pecans, he has a passion for inspiring an investigative spirit in his students.

“I attempt to instill in my students the desire for lifelong learning and the realization that the knowledge base of their profession is not static, rather it is dynamic,” Pegg said. “I get no greater joy than when one of my students is conducting an experiment, and I all of a sudden see a light switch on.”

Pegg’s career has been defined by his enthusiasm toward his students and his unique teaching style. His main goal always has been to provide a balanced mix of engaging lectures and hands-on laboratory activities for his students to explore the concepts that are key to understanding the makeup of food and how its constituents can be analyzed.

Working as coach and advisor to the university’s Food Science College Bowl Team, Pegg works to mentor students while they’re in Athens, and many students still seek his advice long after they have left the university.

In recognition of his commitment, his students have voted him Outstanding Undergraduate Faculty or Graduate Faculty of the Year six times. In 2013, Pegg won the Richard B. Russell Award for Excellence in Undergraduate Teaching, becoming the first faculty member in his department to win the honor.

“For more than a decade, Dr. Pegg has been able to maintain the same enthusiasm for teaching that he had when he started at UGA,” said Josef Broder, CAES associate dean for academic affairs. “That excitement is contagious and inspires a sense of curiosity in his students that never really leaves them. His work is one reason why food science graduates from the University of Georgia are sought after by industry leaders and research institutions the world over.”