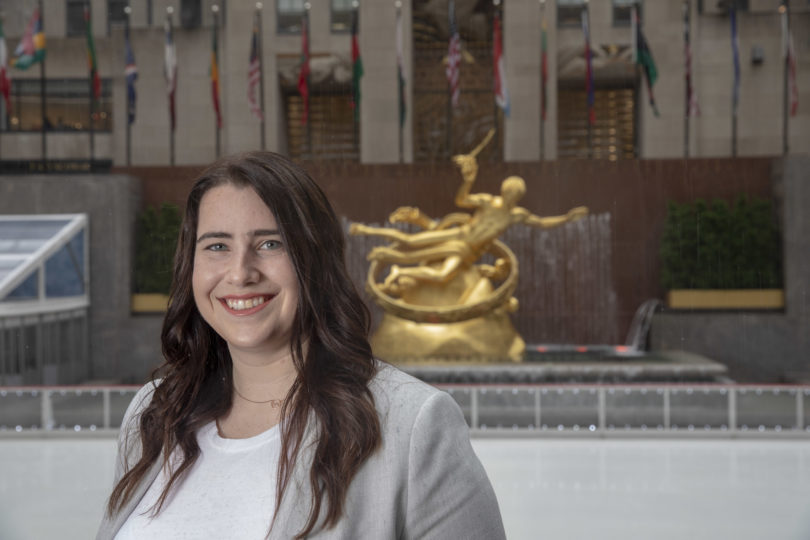 Sarah Hughes AB '14 was destined to work at the Olympics. She shares her name with a gold medalist and has staffed every games since 2014. When the Summer Olympics returns in 2021, Hughes will be there. (Photo by Peter Frey/UGA)

When the Summer Olympics make their long-awaited return in 2021, Sarah Hughes will be attending. Actually, “attending” isn’t quite accurate—although she’s been to four Olympics so far.

Hughes AB ’14 is a researcher for NBCOlympics.com, and during the games she will be staffing the gymnastics venue in Tokyo. In addition to writing all the background material on the athletes—a process that began over a year ago and included trips to several international competitions where she frequently spoke to competitors and coaches in person—Hughes provides real-time updates to broadcasters.

It’s the latest assignment in a remarkably interesting career path that began with an internship during her senior year in the School of Public and International Affairs.

At the 2014 Sochi Winter Games, just three months before Hughes was due to graduate, she served as a runner and personal assistant to on-air talent, including anchors Al Michaels and Dan Patrick. “Sochi was like being at camp,” she says. “All of the interns stayed in the same hotel. I worked 42 days straight, 7 a.m. to midnight. I loved it.”

Specifically, Hughes fell in love with the adrenaline rush of live TV and especially the Olympic Games. That’s when she decided to make it her career, and each Olympics following those 2014 games has brought her more responsibility.

At the 2016 Rio Games, Hughes was assigned to NBCUniversal Rio headquarters, where she worked on the research team for five different sports. At the 2018 PyeongChang Winter Games, she served as the onsite researcher at the figure skating venue. That summer, after four years working as an independent contractor, she was rewarded with a full-time role.

The global nature of figure skating also means that Hughes’ degree in international affairs comes in handy. “It was a big deal that there was a North Korean figure skating pair competing in PyeongChang, and I spoke with them through a translator. How many people can say they’ve spoken to someone from North Korea?”

Most importantly, Hughes educational background helped her put the North Koreans’ presence in its proper historical perspective, and she was able to share that with broadcasters who then discussed it on air.

Hughes’ Olympics role may have been pre-destined—she shares her name with the 2002 gold medalist in figure skating. After Hughes The Skater won in Salt Lake City, Hughes The UGA Alumna’s parents framed the Sports Illustratedcover commemorating it. Hughes still has that cover on the wall of her New York apartment.

The two are actually friends now, having crossed paths at various skating-related events. Still, Hughes sometimes receives second glances from security when she is checking in to skating events. “Or they’ll make a joke, and it’s, like, yeah, you’re the first person to ever say that,” she laughs.