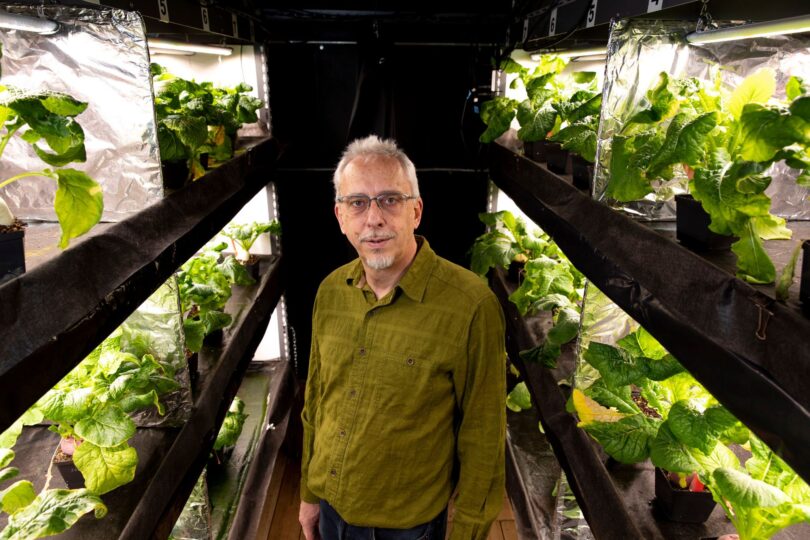 Marc Van Iersel among turnip plants in a grow room at his greenhouses. (Photo by Andrew Davis Tucker/UGA)

A new, internet-connected lighting system for greenhouses could sharply reduce a farmer’s electrical bill, according to a study by University of Georgia researchers.

Recently published in Plants, the study showed that a predictive lighting control system could optimize lighting for plants by predicting sunlight and only running the lights when needed. The data showed that farmers could reduce their greenhouse electrical costs by as much as 33% by optimizing their lights.

On rainy or cloudy days, plants are given supplemental lighting to make up for the lack of sunlight. While effective, these lights can be expensive, inefficient and consume huge amounts of electricity. A 2017 report from the U.S. Department of Energy estimated that horticultural lighting consumed $600 million worth of electricity every year.

“When LED lights first came to market, they gave us an opportunity to control greenhouse lighting on a level that was not possible before,” said Marc Van Iersel, a professor in the College of Agricultural and Environmental Sciences. “At the time, a lot of research was happening to optimize the lights themselves, but almost no one was working on smart control of the lighting system.”

“The electricity used for the lights is anywhere from 10% to 30% of the cost of running a greenhouse,” Van Iersel said. “Our research began with the idea that, if we can reduce this cost, we can very quickly have an impact on the efficiency and sustainability of greenhouses.” 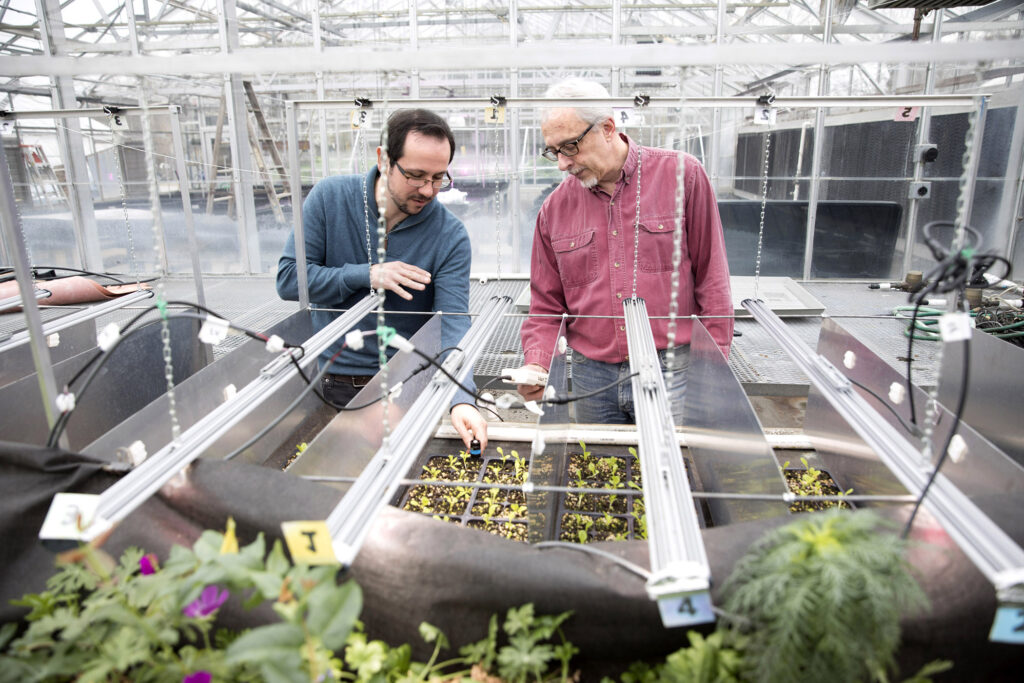 Eric Mattos, left, and Marc van Iersel, co-founders of Candidus, adjust plant growth lamps in a horticulture greenhouse, where they are testing their lighting technology on various crops. (Photo by Dorothy Kozlowski/UGA)

A team of University of Georgia researchers designed a new lighting system that could reduce a greenhouse’s electrical demand without hurting the plants.

Electrical engineering master’s student Shirin Afazli built a control system that uses sensors to measure current weather conditions, and Ph.D. student Sahand Mosharafian and associate professor Javad Mohammadpour Velni developed light-predicting algorithms in their laboratories. In combination, the system can predict the amount of sunlight in the future. This allows it to optimize the lights inside the greenhouse and give plants the correct amount of light.

Greenhouses are predominantly used during the winter and spring, so the team tested their system during both growing seasons. While both experiments showed reduced costs while maintaining plant growth, the new system made a bigger impact during the spring. It reduced costs by 33% in the spring but only 4% in the winter. The system generates the most savings while the sun is shining. Because winter months have shorter days, the lights are required to be on more often.

According to the researchers, the actual cost savings could be even higher. Their experiments assumed a fixed cost for electricity, but in the real world, farms are subject to variable pricing. The team has already programed the system to account for this variable and plans to publish future research that shows higher savings rates. As the planet’s population continues to rise, finding ways to produce more food with less resources becomes increasingly important.

In 2017 Van Iersel co-founded a startup company, Candidus, based on his research into efficient greenhouse lighting. The company builds better lighting control systems for greenhouses.