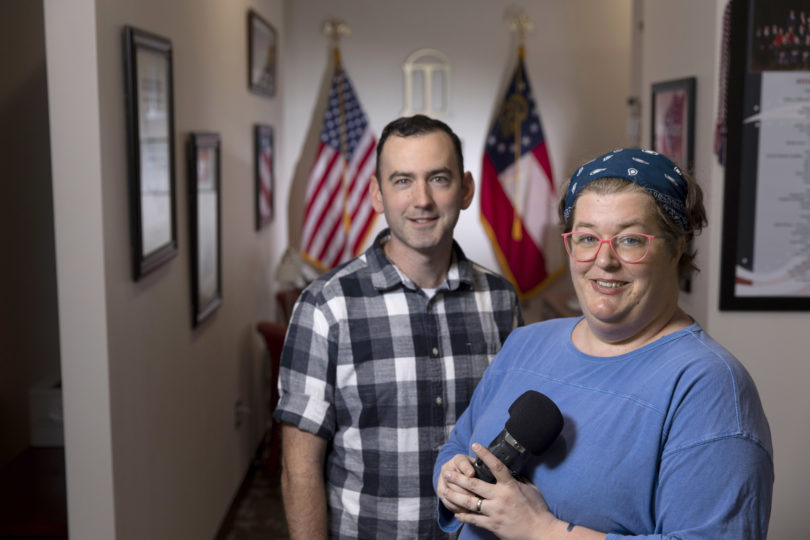 From near death experiences to the best and worst days of their lives, the University of Georgia is keeping an archive of student veterans’ stories.

The goal is to preserve history, and to date almost 90 histories have been recorded.

The stories might include why the student joined the military, what a typical day was like, where they were on Sept. 11, 2001, if they saw active duty, how they would describe service, stories that best exemplify their service, any misperceptions about the military they want to discuss, why they left the military and what their transition back to civilian life looked like.

The UGA Student Veterans Oral History Project is the brainchild of veteran Kate Dahlstrand, a Ph.D. student in history who is particularly interested in how veterans transition back to civilian life.

The project officially got off the ground in fall 2017. Dahlstrand introduced herself to Ted Barco, director of the Student Veterans Resource Center, to help with the veteran coaching program. He asked her about her goals, and she mentioned the oral history project.

Two weeks later, she got an email from Barco that said he’d secured a room, recording equipment and the archival space. He’d also recruit veterans to send to her to record their stories.

Dahlstrand recorded approximately 70 interviews, and the bulk of them were done in the spring semester. Tom McShea, a master’s student in history, took over this semester. He’s recorded 16 interviews with few more to schedule. The histories are housed in the Russell Library, with some audio files available online. The project is a partnership between student veterans, the UGA Student Veterans Resource Center and the Special Collections Library.

The project includes stories of a hospital corpsman who did four deployments and came to UGA with the goal of becoming a physician assistant; a medical evacuation helicopter pilot deployed to Iraq who discusses public misperceptions of the military; an intelligence analyst in the Cold War who discusses issues that women face in the military; and the effects of Hurricane Maria on Puerto Rico. The stories are conversational and the interviews run the gamut—from students who loved their service to students who saw dear friends die, or experienced discrimination or racism.

The program is one of the largest Dahlstrand has heard of—but not as all encompassing as the project at the Library of Congress, which includes oral histories of all veterans. UGA’s project focuses specifically on students and their transition.

Partly inspired by Dahlstrand’s own rocky transition home, the project asks, “Is this their UGA? Do they feel out of place or welcome?”

It’s not always easy to get veterans to tell their stories.

“People don’t want to talk. A lot of them are apologizing that they don’t have a story that matters, especially veterans who never deployed. They don’t feel like authentic veterans,” she said. “I’ve never heard an unimportant story. They’re all different, and there’s something to learn from all of them.”

Once the veterans understand that their story is part of something bigger, and that all the voices are important, they’re more likely to open up.

It also helps that they’re being interviewed by veterans. “No one is judging,” she said. “And it’s with someone who has lived through a similar experience.”

Afterward, many of the students have told Barco that it felt good to tell their story out loud. Many veterans don’t talk about their service from start to finish like that, and they are especially guarded around civilians.

“I am excited for the day when researchers come here to study the oral histories I am collecting,” she said. “I am moved by those who have been so generous in donating their stories; they are a diverse group, and they are not done serving their community.”