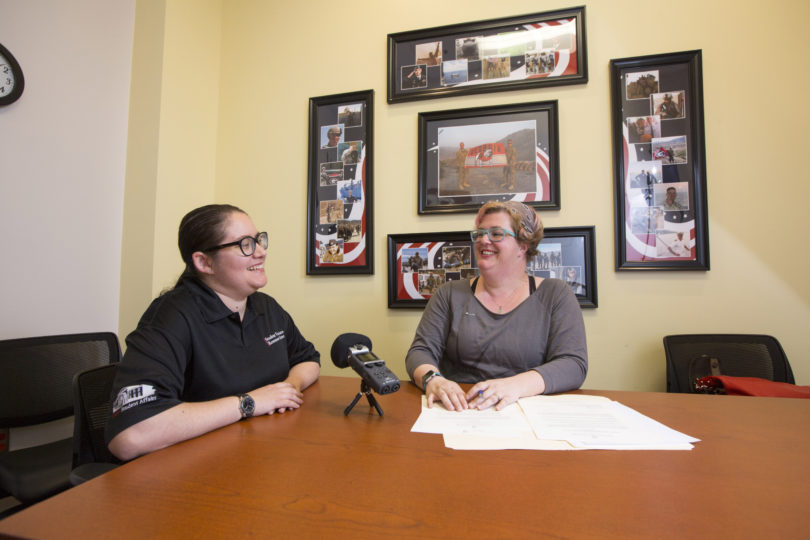 Kate Dahlstrand was a combat medic in the Army who served 12 months in Iraq. Now, she’s finishing up her Ph.D. in history at the University of Georgia.

A self-described historian of the American veteran, Dahlstrand is interested in moments of transition—how veterans transition back to civilian life when they return home or leave the service.

And she’s combined her interest in history and veterans into UGA’s Student Veterans Oral History Project, where UGA records the oral history of student veterans and archives them in the Russell Library, with some of the audio files available online.

The idea for the project came when doing research for her dissertation. She came across the five-volume Tennessee Civil War Veterans’ Questionnaires published in 1914 and 1920. She wondered what a history would look like with more open-ended questions and how useful that would be to future historians.

She thoroughly researched other veterans’ oral history projects, including those at other universities, and got the support of Christian Lopez, head of oral histories at UGA’s Russell Library.

With help from Ted Barco, director of the Student Veterans Resource Center, she got the project off the ground, and almost 90 interviews have been recorded since 2017.

The aim is to help future historians, but it’s also a personal project, partly inspired by Dahlstrand’s own transition back to civilian life after serving for a year in Iraq.

Dahlstrand served as a combat medic and was trained in taking blood, CPR and basic EMT certification. It’s a vocation she picked in part because she liked the idea of helping people.

Training shifted to preserving lives—triage in a combat zone. It was treating broken bones, chest wounds as well as IED and gunshot injuries.

Dahlstrand was deployed as part of Operation Iraqi Freedom from October 2005 to February 2007.

Her unit was a Black Hawk air assault unit. In addition to aerial support for convoys and secret squirrel night missions, her unit also flew in VIP guests from politicians to entertainers on the USO Tour.

The highlight of her deployment was meeting Chuck Norris while he was on a USO Tour greeting the troops. She volunteered to be his medic for the day.

In total, she was in the military for 10 years. “It was some of the best and worst days of my life,” she said.

Dahlstrand came home from Iraq divorced. Within 24 hours she was diagnosed with PTSD.

For six months, she described herself as a party girl, drinking and avoiding her problems. She even bought a motorcycle.

Going back to school

That fall, she started taking classes at Virginia Commonwealth University, going to therapy and using resources at the Vet Center. The structure of a class schedule really helped with her transition. She went on to finish her degree at Florida Atlantic University and get a master’s in history.

She came to UGA specifically to work on her dissertation and work with the history department’s John Inscoe and Stephen Berry, both Civil War historians.

At UGA, she wants the oral history project to be a safe place for veterans to tell their stories. She wants to capture the stories to learn from them. “All of these voices are important.”

“I’m interviewing the people who made it home—and chose not to let their service define them, but inspire them to something else.”