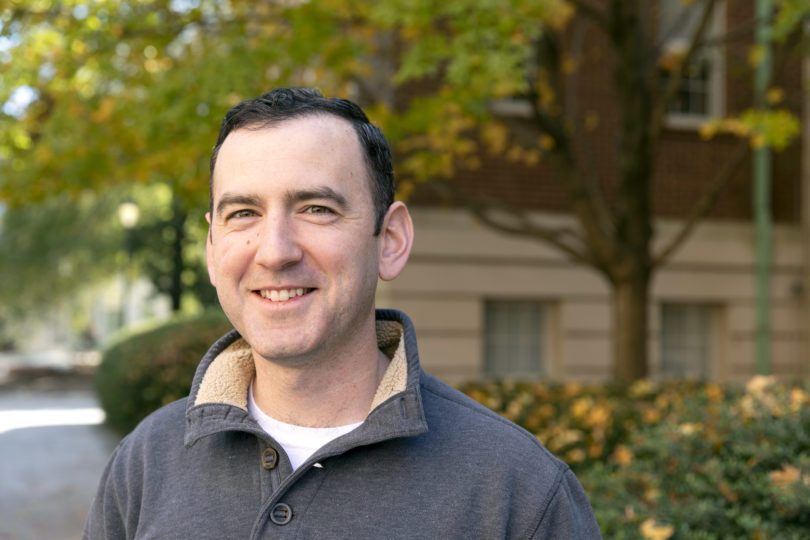 Tom McShea is a graduate student in the department of history. A captain in the U.S. Army, his next assignment is to teach history at the U.S. Military Academy at West Point (Photo by Andrew Davis Tucker/UGA)

As a cadet at the United States Military Academy at West Point, Tom McShea knew he wanted to come back and teach.

And after he finishes a master’s degree in American history at the University of Georgia, he has a two-year assignment to do precisely that: teach history at West Point beginning in fall 2020.

He grew up in the nearby Hudson Valley, so it’s almost like returning home for him.

McShea comes from a military family. His dad was a lance corporal in the Marine Corps who did two tours in Vietnam. His brother attended West Point and is now a battalion commander in the U.S. Army. “He didn’t push us into the military,” McShea said. “But he did push us to go to college. He was very encouraging.”

McShea graduated from West Point in 2010. After officer basic, his first assignment was as a platoon leader at Fort Campbell, Kentucky, where he later served as an executive officer. “It was like drinking through a fire hose. I was learning a lot those first few years.”

He took over a platoon that had just come back from a difficult deployment in Afghanistan. “I was the new guy, and I had to earn these soldiers’ respect,” he said. “I quickly learned about real humility.”

In 2012, he deployed to the Southern Kunar Valley in Afghanistan.

“So much recent American history has happened there,” he said. “It was a surreal environment to find myself in. I’d never traveled outside the country until college. Then I was on the other side of the world, in a place I’d only ever read about.”

His first daughter was born four months before his deployment to the Kunar Valley, so he tried to Skype and Facebook chat as frequently as possible with his wife and new baby.

His deployment was a relatively quiet one. “I didn’t have a Hollywood deployment,” he said.

He worked as a combat adviser on a security assistance team—helping an Afghan unit improve security.

Related
— Moments of transition: From veteran to student to historian
— Preserving veterans’ history one story at a time

“It’s tough on your family,” he said. “You’re away a lot, even when you’re not deployed. It’s missing school recitals for problems that can’t wait until tomorrow—vehicle maintenance or troop disciplinary problems.

“I can go to the field. I can be cold, be hungry,” he added. “But nothing really prepares you for how hard it is for your family while you’re away.”

Now a father to four, he thought the West Point assignment would be easier on his family.

Working out of the Student Veterans Resource Center,  he asks open-ended questions and the students talk about what they want to talk about.

It can also be helpful for them to sit down and get their story out, he said. Maybe it’s something they’ve never told anyone before.

It can be a struggle to get veterans to talk—even to a seasoned veteran like McShea.

Veterans come to UGA, and they keep to themselves. They like to take care of their own business and stay squared away, he explained.

They’ve been in the military. They’re self-sufficient. They come here older and approach college more seriously than someone straight out of high school, according to McShea.

“Your story doesn’t end after you get out of the military,” he said. “You’re not just a student at UGA or a lance corporal in the Marines. What brought you here matters. Researchers decades down the road will place a lot of value in these stories.”