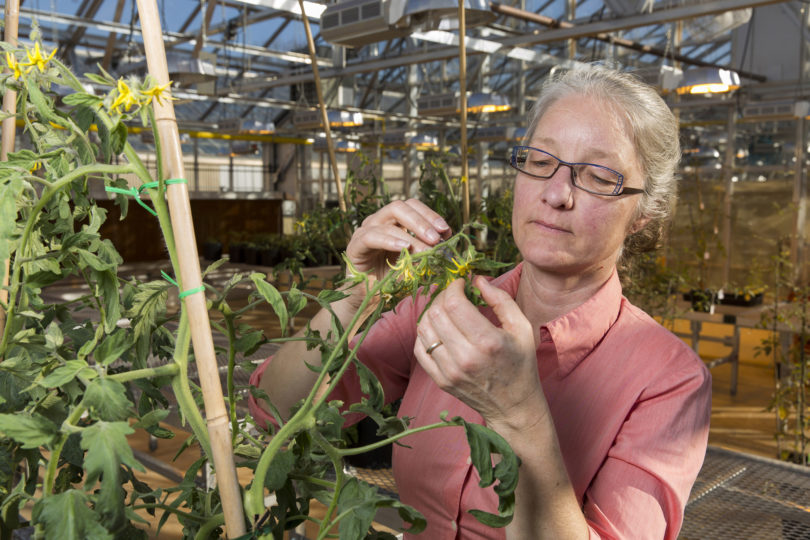 Athens, Ga. – Ever wonder how that slice of tomato on your summer BLT got to be so perfectly bread sized?

Geneticists at the University of Georgia have found the gene variants that control a tomato’s size. They published their findings recently in the open-access journal PLOS Genetics.

Professor Esther van der Knaap-who has spent much of her career working to understand the genetic shifts that occurred between ancestral, wild tomato varieties and modern, cultivated tomatoes-has helped to pinpoint another gene that regulates the size of the tomato’s individual cells, which in turn helps to regulate the size of the overall fruit.

“The knowledge of the gene will now open up avenues of research into how fruit size can be increased further without negatively impacting other important qualities such as disease resistance and flavor,” said van der Knaap, a professor in the department of horticulture and the Institute of Plant Breeding, Genetics and Genomics at UGA.

When humans first began cultivating the wild tomato in the Andean mountain regions of Ecuador and Northern Peru, they continually selected plants that produced larger fruits.

Now, thousands of years later, tomatoes on the market can weigh 1,000 times more than the fruits of their ancestors.

Van der Knaap and her research team investigated a gene they named Cell Size Regulator, or CSR, that boosts fruit weight by increasing the size of the individual cells in the fleshy part of the tomato. Compared to wild tomatoes, domesticated varieties carry a mutation in the CSR gene that affects the way tomato cells develop before they ripen and fall off the plant.

The variation originated in the cherry tomato but now appears in all large cultivated tomato varieties.

The new study expands on previous research that had identified the location of CSR at the bottom of chromosome 11 as only a small genetic contributor to tomato weight.

The transformation of the tiny berry-like fruit of wild tomatoes into the beefsteaks or Roma tomatoes grown by farmers today involved the development of a new mutation to support the change in function of the CSR gene. Large fruit required many more mutations in other genes to allow the plant to carry and support its new bounty.

“There was slow selection for large fruit by people because, of course, if the tomato fruit grew too big for the plant, it would collapse the plant and that would be a dead-end plant,” said van der Knaap. “If the fruit is too large for the plant then it can only make that one fruit before it collapses. Any farmer would say, ‘That’s no good,’ and toss it out.”

It took thousands of years for farmers to breed tomato plants to produce the fruit we know today because they were selecting plants not only for large fruit but also for the structure needed to support the fruit. Van der Knaap and other researchers are still looking for the genes that contributed to the mutations that led to plants that could support larger tomatoes.

“For fruit weight, I think we have just scratched the surface, there’s still a lot that we don’t know,” van der Knaap said.