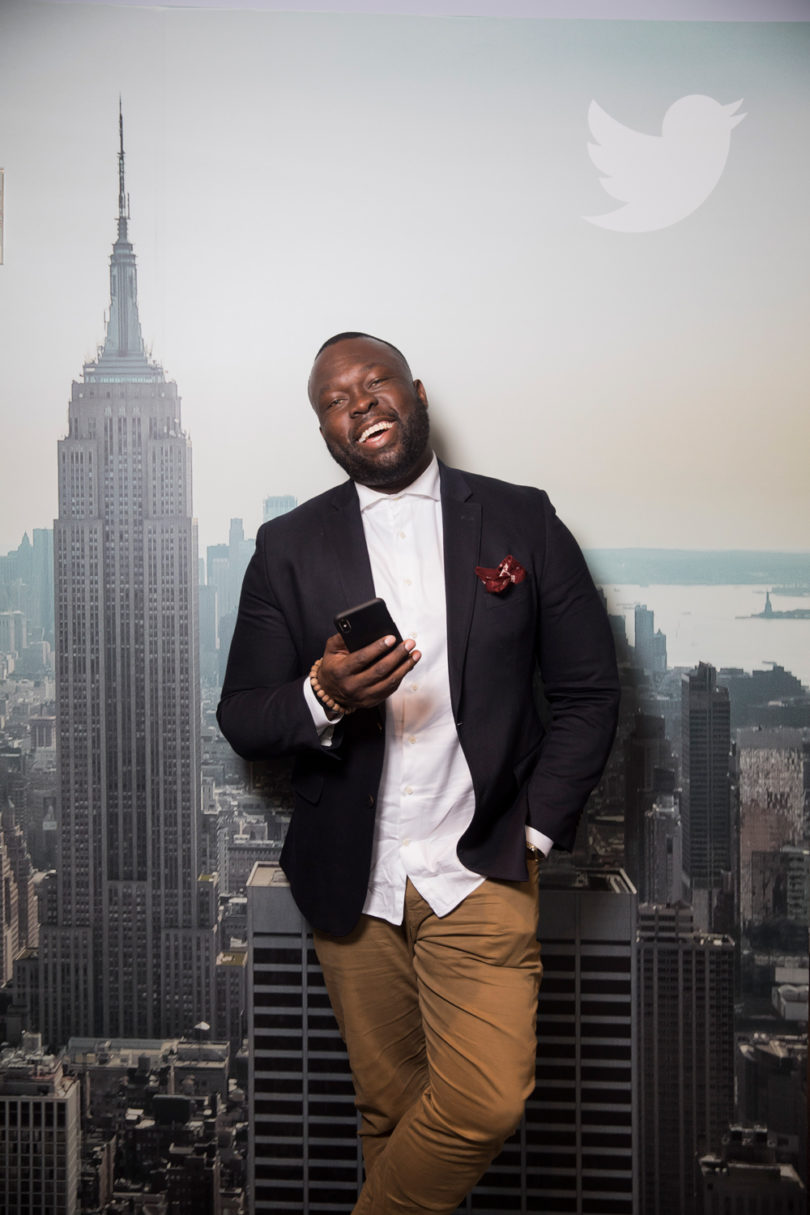 TJ Adeshola MA '08 is head of U.S. Sports for Twitter. When he first joined Twitter—several years before he got a job there—he held off tweeting until he gained 100 followers. He now has more than 10,000. Twitter Sports numbers 15.3 million. (Photo by Peter Frey/UGA)

To be clear, TJ Adeshola’s job is not fun.

“What’s a word that’s better than fun?” says Adeshola MA ’08, head of U.S. sports for Twitter. He smiles easily, laughs even more easily, and carries himself with a mix of confidence and self-deprecation. “I would like to say it’s perfect. It’s epic. It’s a blast. It’s just the best.”

Neither is social media leadership, and few work harder than the New York-based Adeshola and his team of seven, which is spread across the country. They partner directly with professional sports leagues—the NFL, NBA, and MLB League Baseball to name a few—the NCAA, and even individual athletes to streamline and amplify their Twitter presence. The job requires energy, ambition, creativity, the ability to think on one’s feet, and the highest level of communications skills. Adeshola checks every box.

It’s a job (and a platform, for that matter) that didn’t exist when Adeshola earned his master’s from the Grady College of Journalism and Mass Communication.

During the fall of his second year of graduate school, Adeshola learned that ESPN’s College GameDay would be broadcasting from Athens. So, he got up early and headed out not to watch the show but to, in Adeshola’s words, “find the person who seemed the most important” and ask for an internship.

He was successful. Three months later, Adeshola was interning in Bristol, Connecticut. After he graduated, that internship turned into full-time employment. Adeshola worked in business operations at the network and soon noticed a new way that people were communicating.

“While I was at ESPN, Twitter was taking the world by storm, and I was always obsessed with it,” Adeshola says. “But it was really intimidating because I didn’t know how to establish my voice.”

Adeshola chose to be cautious. He didn’t tweet until he had gained 100 followers. (He now has more than 10,000 personally, and Twitter Sports numbers more than 15.3 million.) “The beauty about identity is that we learn something new about ourselves every day,” he says. “Different communities communicate in different ways, so my voice is constantly evolving. That’s emblematic of life, which is what I love about Twitter.”

Adeshola likens Twitter Sports’ atmosphere to that of a global sports bar. “The game’s on. You might be cheering for Georgia; someone else is cheering for Florida. You’re jabbing at each other. You’re upset. You’re happy. It’s really this holistic experience that allows you to jump into a community and converse about something that’s happening in real time.”

Those conversations, both on Twitter and in person, are things that Adeshola takes seriously. A lot of them also involve his unabashed love for the University of Georgia, a school he first encountered in person at a basketball camp run by former Bulldogs coach Jim Harrick. Since graduation, he returns to Athens as often as he can. He enjoys talking not only with students but with anyone starting their career.

“I try to talk to students as much as I can. I’ll do Google hangouts,” he says. “Because mentorship has been such an important tool for me to get to where I am today, I try to have a coffee with someone I don’t know every week. Someone who is aspiring to have a career in sports or tech. It’s also important for me to extend an olive branch to people who look like me.”

Adeshola calls it helping “the next version of himself” become a success.