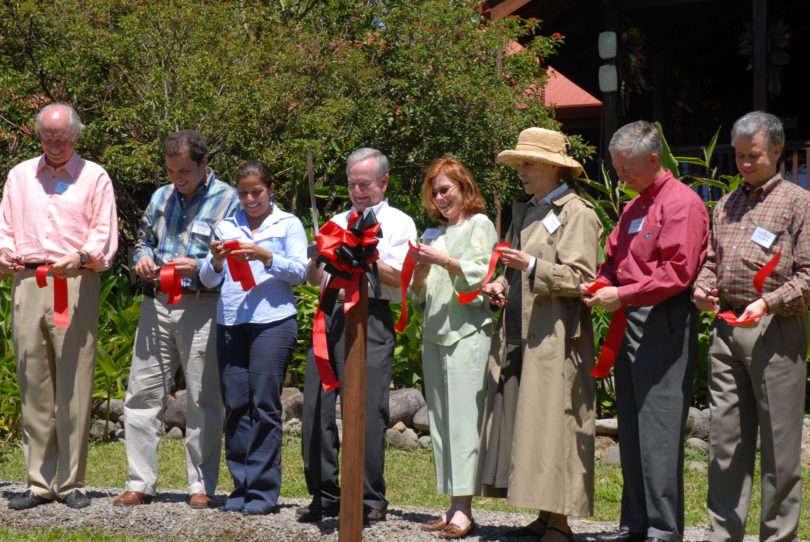 A delegation of senior administrators

“No one can be fully educated in the 21st century without understanding cultures other than their own,” said Adams, who toured the campus followed by a family-style dinner with UGA students and faculty participating in the Franklin Spring Semester Study-Abroad Program. “The Costa Rica program offers students exposure to Spanish, science and ecological concerns, among others. UGA at Costa Rica is located in one of the most unspoiled areas on the planet. You will benefit from study here.”

Amelia Torres, an undergraduate studying at the Costa Rica campus, was able to meet with the president.

“I told President Adams how thankful I am for him and his vision, because without his determination, I would not have had the opportunity to come and study here,” Torres said. “Costa Rica has literally changed my life.”

“Clearly, this amazing increase in student interest proves the wisdom of those administrators, the UGA Foundation and faculty members who believed in the Costa Rica campus and its future,” said Judith Shaw, associate provost for international education.

“In many ways, we are merely in our infancy, and look at all we have accomplished,” said Quint Newcomer, director of the UGA Costa Rica program, during the dedication ceremony. “We’re educating more than 175 students per year. . . We have an outstanding resident naturalist program not found anywhere else, we have more than 40 UGA faculty members involved in our programs, and we have built a true living classroom environment that embodies sustainable development—integrating forest conservation with sustainable agriculture and model residential and classroom facilities, all in the midst of an existing rural community.”

While at the time of its acquisition, the purchase of the Costa Rica campus was thought of as a “reasonable risk,” this venture has exceeded all expectations. With $1.5 million in capital improvements from the University of Georgia Foundation, donors and the University of Georgia Research Foundation, the program has generated abundant student interest and achieved financial self sufficiency. Seven years and hundreds of satisfied UGA Costa Rica alumni later, the university is enjoying a substantial return on its investment.

The UGA Costa Rica dedication was supported in part by the President’s Venture Fund through the generous gifts of the University of Georgia Partners.