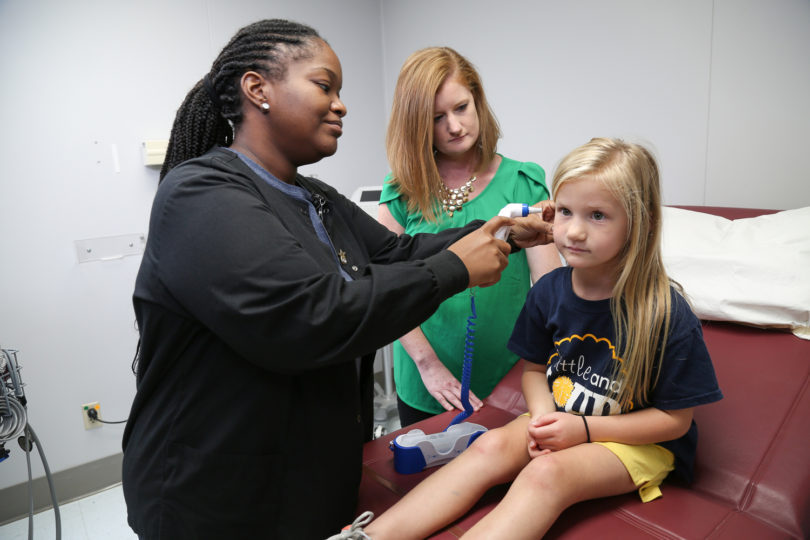 One of the most successful examples of the Archway Partnership is the work of the UGA College of Public Health, which has assisted in providing crucial health care services at Taylor Regional Hospital in Hawkinsville since 2016. (Photo by Shannah Montgomery)

The Archway Partnership is one of UGA’s most successful outreach programs to communities across the state.

The University of Georgia’s impact on the state reaches far beyond the main campus in Athens. UGA Public Service and Outreach (PSO) recognized that and created the Archway Partnership in 2005. 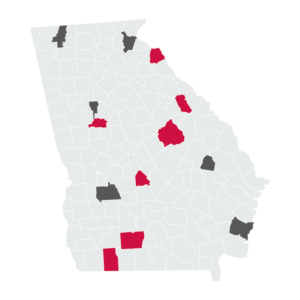 Envisioned as a way for UGA to address the comprehensive needs of individual communities, the Archway model stations UGA public service faculty in partner counties where they serve as conduits for locally driven programming and projects. The idea isn’t for UGA to parachute into these communities, wave a magic wand, and solve all of the community’s problems. Archway is a true partnership: A UGA employee based in the community works with local leaders to identify the issues most important to their individual communities. UGA experts, often including their students, then take part in helping address the issues.

“We don’t go into communities and tell them what they need. Instead, Archway is a partnership where communities identify and prioritize their needs, and in turn we find UGA expertise and resources to help address those needs,” says Jennifer L. Frum PhD ’09, vice president for UGA Public Service and Outreach. “The win-win outcome is that communities are able to move the needle on some of their most critical challenges, and UGA students get hands-on experience on real-world issues.”

The results have been outstanding. Since Archway’s founding 15 years ago, over 1,200 students, more than 200 UGA faculty members, and hundreds of community leaders have participated in projects in Archway communities in 13 counties across the state.

At this time, Archway has active partnerships in seven counties. Six others graduated from the Archway program and are considered Archway alumni. The many ways in which the projects improve local communities are as distinct as the communities where they take place. 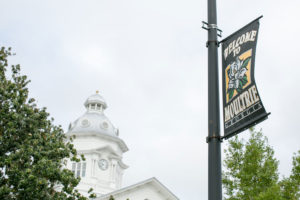 UGA’s partnership with Colquitt County, where Moultrie is the largest city, was Archway’s first. Between 2005 and 2017 Colquitt County has realized an average of $19 million in additional economic activity as a result of the partnership. (Photo by Shannah Montgomery)

In 2005, the Archway Partnership launched with a pilot program in southwest Georgia’s Colquitt County. It hasn’t left. The original plan was for a five-year commitment, but when that time period was up, county leaders were keen to keep the program going themselves. The results have been impressive.

Between 2005 and 2017, Colquitt County realized an average of $19 million a year in additional economic activity as a result of the Archway Partnership. And the range of projects involving the partnership has been broad. From identifying a cost-efficient way to expand the county’s wastewater system to increasing the county’s high school graduation rate, Archway has found myriad opportunities to positively affect the community.

For example, Leadership Legends is a mentorship program for young African American men. Another was the design of a new welcome center in downtown Moultrie, Colquitt’s largest city. Yusheng Fang MFA ’19 was the lead on the project, which repurposed a decades-old storefront that had been vacant since 2016.

“The traces of this history give this building a unique life,” Fang says. “On the second floor, there is a special barn door and many structures with a sense of industrial design. How to retain these historical senses while allowing them to serve new functions is an exciting and challenging part of the renovation project.”

Colquitt and UGA are connected in another important way. A few years ago, a group of Colquitt County leaders established the UGA Moultrie-Colquitt County Alumni Scholarship Fund. So far, the group has provided Georgia Commitment Scholarships for five students to attend the University of Georgia. 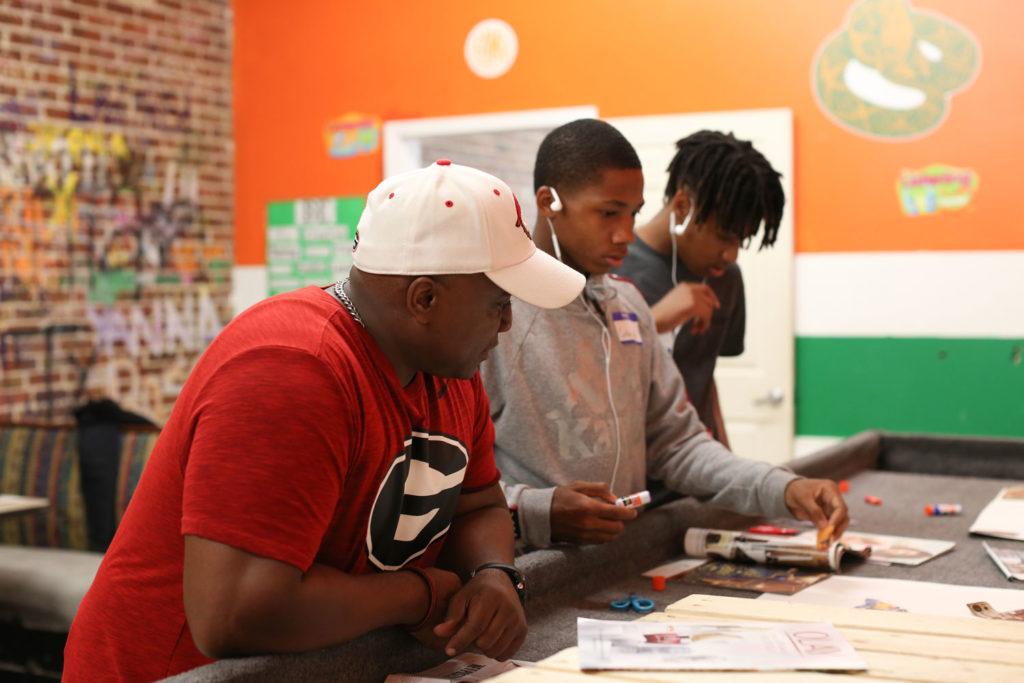 Archway’s newest partnership is with McDuffie County, about half an hour west of Augusta. It kicked off in 2019 and, like its venerable Archway cousin Colquitt County, one of McDuffie’s first projects was downtown redevelopment.

To that end, a group of students from the Terry College of Business put together a presentation aimed at revamping the Thomson Twin Cinema, a centerpiece of downtown Thomson, the McDuffie county seat.

“Although we are not from Thomson and McDuffie County, we were able to see and feel how important the theater is to many people within the community,” says Aracely Caldera BBA ’19, the student team leader. “It’s a place that holds many memories for everyone who’s ever visited. The theater is an integral part of downtown, and being able to renovate it and structure it in a way that promotes economic vitality would be a success.” Theater owners have already implemented some of the students’ suggestions. 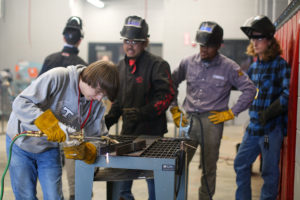 In Fall 2019, support from the Georgia Power Foundation in partnership with Archway helped create a new welding program at Thomson High School. The program helps address a growing shortage of skilled workers in eastern Georgia. (Photo by Shannah Montgomery)

Another project in McDuffie County involves an Archway partnership not just with Thomson High School but with one of the state’s most important industries. Kerry Bridges, a member of the McDuffie-Thomson Archway Partnership executive committee and an area manager for Georgia Power, has long recognized the need for skilled workers in rural areas of the state.

That’s why he asked the Georgia Power Foundation to support a new on-site welding program at the high school. The foundation kicked in $100,000 to start it, and 27 students enrolled last fall.

Archway helped create the school’s welding lab, and graduates will be well-trained to take one of the thousands of jobs being created by the expansion of three Georgia Power plants in eastern Georgia.

For one project, Henry Young, Kroger Associate Professor of Community Pharmacy, worked with Taylor Regional Hospital in Hawkinsville to identify reasons why COPD, pneumonia, and congestive heart failure patients frequently returned to the hospital. And in 2015, graduate students in UGA’s College of Public Health completed a federally mandated Community Health Needs Assessment (CHNA) for the hospital, which couldn’t afford the consultants to complete the assessment and was in danger of shutting down. The CHNA not only confirmed that the hospital was needed in the community; it also showed the need for an outpatient clinic as well. 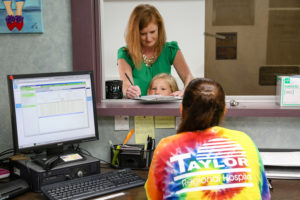 In 2018, UGA received a national Award of Excellence from the University Economic Development Association for Archway’s work in Hawkinsville, which helped save Taylor Regional Hospital from closing. (Photo by Shannah Montgomery)

Archway, along with UGA’s J.W. Fanning Institute for Leadership Development, also helped create the Pulaski Tomorrow Leadership Program. The program encouraged a much more diverse group of people to become leaders in the community, and now for the first time, women serve as both Pulaski’s sole county commissioner and city manager.

“Learning how to work with the community and see something tangible was the biggest takeaway for me,” says Leigh Anne Lloveras BSEnvE ’19, who worked on a design for the Flint River Water Trail in Spalding County. Her team created designs for a place where boats could come in and out of the water along the Flint River.

“We knew we could do the calculations, but taking in public input and working with stakeholders was a big lesson,” she says.