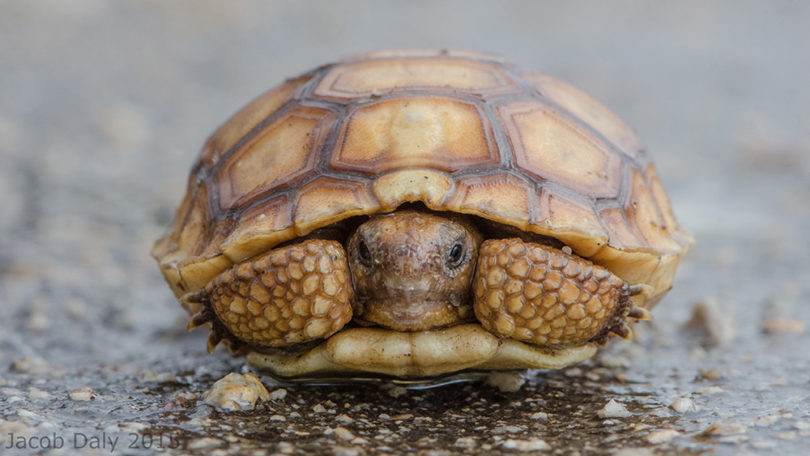 A juvenile wild tortoise appears to welcome the rain and the camera. (Photo by Jacob Daly)

“Increase the size, increase the survival” is the premise behind head-starting—raising an at-risk species in captivity until it is large enough to be less vulnerable to predators after release into the wild. But research conducted by University of Georgia scientists in California’s Mojave Desert reveals larger size alone is not enough to save the desert tortoise from predator attacks.

Jacob Daly, first author on the study, is the first to use the head-starting method indoors. This technique seemed like the ideal conservation strategy to produce a larger shell that would protect the tortoise. 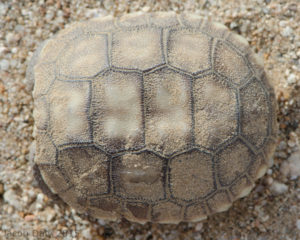 A baby tortoise or hatchling hiding in its fragile, 1.8-inch-long carapace. (Photo by Jacob Daly)

Ravens are just one predator faced by desert tortoises, according to Daly, now a wildlife biologist at U.S. Army Garrison Camp Parks in California. Desert tortoise populations have faced a significant decline in their population as a result of habitat degradation and human-subsidized predators like ravens and coyotes, whose populations increase based on food sources such as haphazardly discarded human trash.

The team radio-tracked each cohort, comparing movement, the animals’ ability to build burrows and to utilize rocks as camouflage.

“Although we did not see the anticipated boost in survival we expected from the larger indoor tortoises, we were encouraged by the fact that we could reduce the amount of time it took to get to that recommended release size by indoor rearing,” said Tuberville, associate professor at SREL and an adjunct faculty at Warnell. “And without apparent adverse effects on their survival or behavior compared to released hatchlings or released outdoor-head-started tortoises.”

As tortoises age, their shells become harder, and previous studies have documented that survival from predators increases when the carapace is 3 to 4 inches long. The indoor-reared animals approached those sizes in seven months, according to Tuberville. With outdoor head-starting, it can take several years for tortoises to reach the recommended size because they go through winter dormancy.

The team plans to increase the length of indoor head-starting to a year to allow the tortoises to produce a larger and harder carapace.

According to the study, ravens were able to perch on power lines that were widespread throughout the Mojave National Preserve. In the future, researchers will release the animals further away from potential perch sites, Tuberville said.

Round-tail ground squirrels and kangaroo rats inadvertently acted as allies, building burrows that served as refuge for the desert tortoises.

The study was published in the Journal of Wildlife Management and is available at https://wildlife.onlinelibrary.wiley.com/doi/full/10.1002/jwmg.21758.