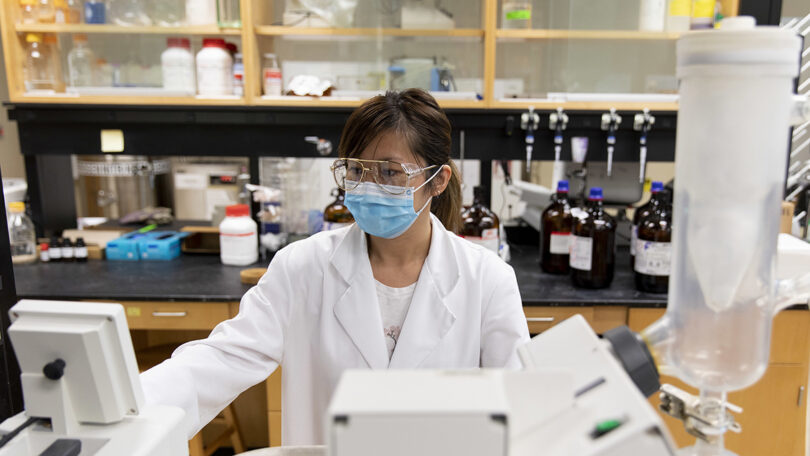 Research scientist Mia Ji works with a rotary evaporator as she runs an experiment. (Photo by Andrew Davis Tucker/UGA)

Fueled by new advancements in infectious diseases, plant sciences, behavioral research, animal health, informatics and many other disciplines, UGA posted $495 million in R&D expenditures in fiscal year 2020, which ended June 30. For six of the past seven years, the university has reported annual increases in R&D, which has grown by 41% during that time.

UGA has focused strategically on growing its research enterprise through faculty hiring initiatives, capital projects dedicated to research (such as the ongoing effort to modernize and expand Science Hill, including the I-STEM Research Building currently under construction), and enhanced administrative support to faculty seeking external research funding. 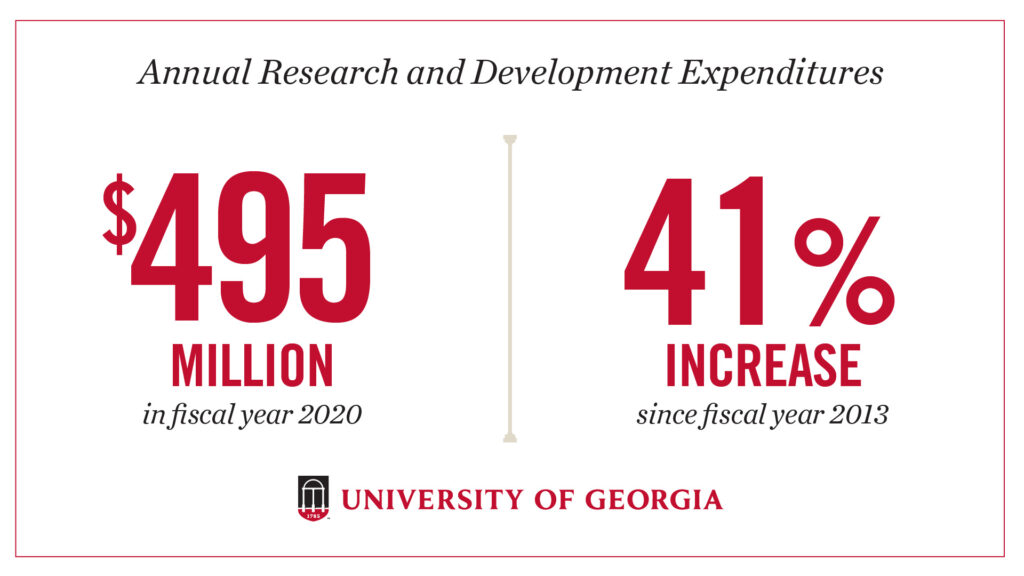 “Growing research and innovation is central to the mission of this university, and the future of the research enterprise at UGA has never been brighter,” said President Jere W. Morehead. “I am pleased that our strategic investments are paying off, and I look forward to the many life-saving and world-changing advancements that will result.”

UGA faculty earned dozens of multi-million-dollar awards last year, including potentially the biggest in the university’s history. Ted Ross, a GRA Eminent Scholar and director of the Center for Vaccines and Immunology in the College of Veterinary Medicine, received a major NIH contract to develop a more effective flu vaccine. Establishing one of several prestigious and multi-institutional Collaborative Influenza Vaccine Innovation Centers, the contract is slated to be worth $130 million over seven years. Once the coronavirus pandemic hit, NIH directed Ross to expand the scope of this project to include the testing of potential COVID-19 vaccines, working with colleagues at both academic and industry labs.

UGA received other eight-figure awards in 2020 as well. Professor David Okech in the School of Social Work was awarded nearly $20 million from the U.S. Department of State to find ways to combat human trafficking. Distinguished Research Professor Jessie Kissinger in the Franklin College of Arts and Sciences received two awards worth a combined $16 million to develop specialized health informatics databases.

These large awards complement thousands of other research grants and contracts, large and small, earned by faculty from across UGA’s 17 schools and colleges, nearly a third of which received awards totaling more than $10 million.

“The University of Georgia’s growth in external research funding demonstrates the increasing recognition of our faculty, nationally and internationally,” said S. Jack Hu, senior vice president for academic affairs and provost. “In a broad range of fields and often working together across traditional academic disciplines, they are making a positive impact on our state and world.”

UGA recently launched its Innovation District initiative in part to capitalize on the university’s research growth and provide new pathways for discoveries to reach the public. In each of the past six years, UGA has been a Top 5 university for the number of new products brought to market. UGA now ranks No. 10 in the nation for “innovation impact” as measured by the George W. Bush Institute/Opus Faveo Innovation Development.

“UGA faculty have made significant progress in expanding their externally funded research activities, which allows us to better serve the citizens of Georgia and the world,” said David Lee, vice president for research. “I congratulate the faculty on their continuing progress. To maximize the impact of our growing research engine, the university has invested in the expertise and resources to bring new discoveries to market whenever that is appropriate, and the Innovation District is an exciting new example.”