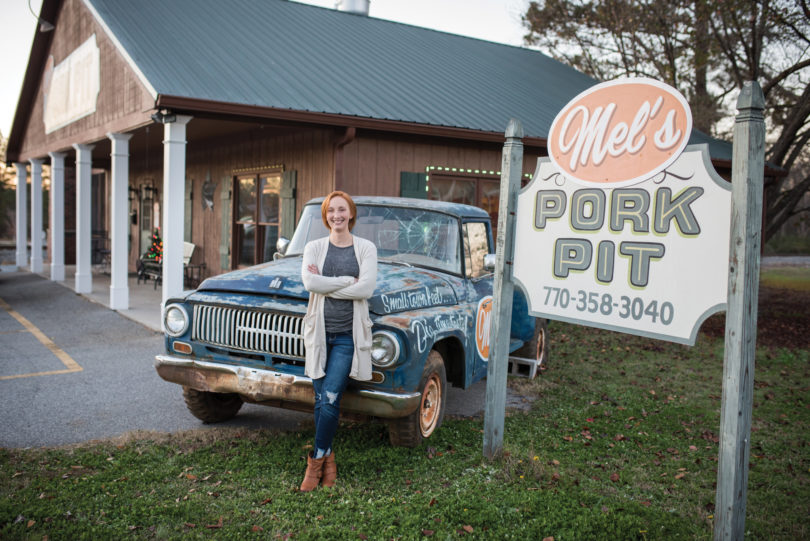 Melinda Allbritton is a lifelong resident of tiny Milner, Georgia (population 213). Now she's the owner of one of the area's most popular restaurants and gathering spots. (Photo by Devon McKenna/ PhotoSynthesis Studio)

The barbecue at Mel's Pork Pit is the ideal mix of smoke and spice. The rest of the menu is pretty good too.

The owners of The Pork Pit, one of the two restaurants in her no-stoplight hometown of Milner (population 213), were retiring and planned to close the place. Allbritton, who had worked in local banks since she was in high school, had just been offered a management position in Greensboro, Georgia. But she wasn’t sure if she wanted to leave. Then Allbritton learned about the restaurant.

“I thought maybe this was my escape from banking. So I sat down with the owners and worked out a deal,” says Allbritton BSFCS ’10, who earned a degree in consumer economics at the University of Georgia Griffin. She credits her UGA education for teaching her the skills and giving her the confidence to enter the challenging restaurant business.

It’s not easy to succeed in it, particularly when you are located in a rural area. (Milner is about 10 miles south of Griffin.) But with the combination of great food (the barbecued pork sandwich is the ideal mix of smoky meat and spicy, vinegar-based sauce) and creative outreach, business is booming.

In its first year, Mel’s Pork Pit did three times the business of the previous owners. Allbritton not only works hard on her food, arriving at 7:30 a.m. every morning to prepare that day’s dishes from scratch, she’s become a pillar of her community.

Mel’s Pork Pit has developed into Milner’s go-to spot for social activity. Allbritton’s restaurant has hosted church singing groups, book clubs, painting classes, and UGA game-watching parties. She organized a Halloween parade that brought more than 500 area children to town and has even catered events at her alma mater up the road.

In less than two years, she’s grown from two employees to six. She also has designs to further expand her space to add outdoor seating—the first restaurant in Lamar County to have it. She’s already expanded the menu to include barbecued chicken, brisket, and other goodies, and plans to eventually rebrand as “Mel’s” to reflect the increasingly diverse offerings.

And everything is done with a sense of fun. Allbritton recently purchased a 1962 International pickup, painted her logo on the doors, and parked it out front to catch the eyes of passers-by.

“You want to keep your regulars happy,” she says. “But you also have to get the word out to get new people coming in.”

This story first appeared in the Spring 2018 issue of Georgia Magazine.