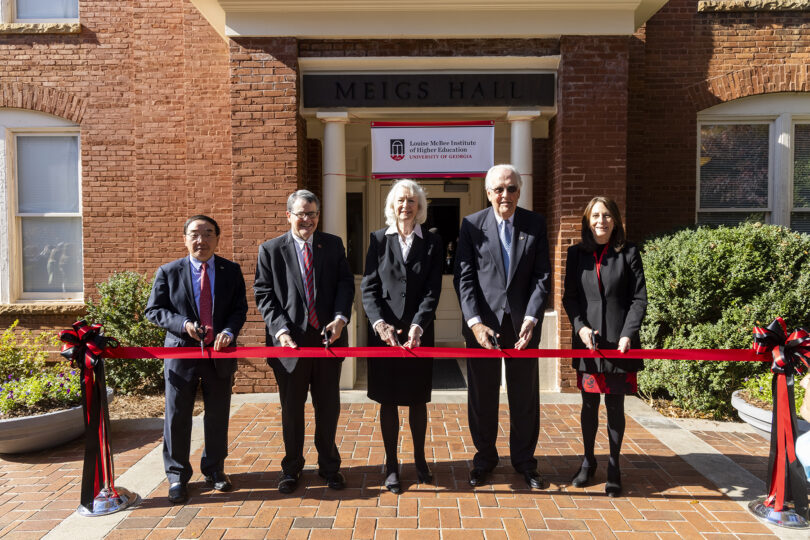 The University of Georgia held a dedication ceremony Nov. 16 to celebrate the recent naming of the Institute of Higher Education in tribute to the late Louise McBee, a revered university administrator and state legislator.

“She was a person who cared about students, cared about faculty and cared about the staff,” said UGA President Jere W. Morehead. “More than anything else, she cared about making the University of Georgia a better place, and that was always at the forefront of everything she did.”

McBee died in March at the age of 96. She was an ardent supporter of the IHE throughout her life, and her estate gift of more than $3.5 million is the greatest single donation to the IHE in its nearly 60-year history.

“Even at the end of her life, education was her mantra,” said Libby V. Morris, director of the McBee Institute. “With her support, we have excelled to become one of the leading higher education programs in the nation. In recognition of her esteemed leadership and generosity, we are profoundly grateful to name the institute in honor of Dr. Louise McBee.”

The gift will support the Louise McBee Distinguished Professorship in Higher Education, the Louise McBee Lecture in Higher Education and the establishment of the McBee Scholars program to provide assistantships for outstanding doctoral students in higher education. Additional funds will create an endowment to enhance the IHE’s strategic partnerships, initiatives and innovation across the three core areas of instruction, research and service.

Charles Knapp, UGA president emeritus and director of the institute’s Ed.D. program, spoke about McBee’s sense of what was right and expedient, calling her an “ethical North Star.” He also remembered her love for the university.

“Louise richly deserves this honor, and the University of Georgia will be a better place for having this institute named the Louise McBee Institute for Higher Education,” Knapp said. 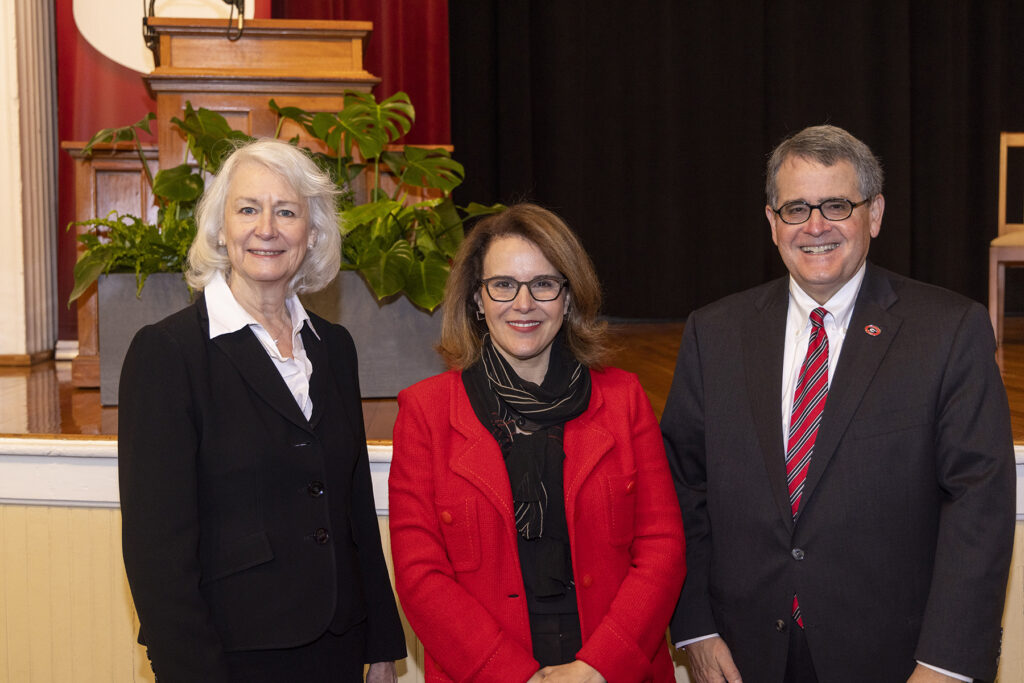 Following the dedication, Joan T.A. Gabel, president of the University of Minnesota and a UGA School of Law alumna, delivered the 31st Louise McBee Lecture in Higher Education, one of the few annual lecture series in the U.S. focused solely on higher education.

“She changed the rules for a lot of people, but especially for women like me,” she said. “The fact that I’m here, right now, talking to you is part of her legacy.” 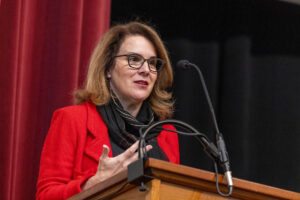 Gabel discussed the importance of striking a balance between the origins and values of higher education and thinking about what can and should be done in the future. A social contract essentially means giving something up in order to receive something considered superior to what one could do on their own. According to Gabel, education is a presumed part of this exchange because it allows people to fully make a choice about what kind society they want to live in and allows them to be participants in the advancement of that society.

“When we work together is how we achieve this higher level,” she said.

Gabel added that higher education institutions should remember those origins and values and look to their commitments to guide what is coming in the future. Their purpose is to educate first, and when challenges arise, they need to consider what it means to change and evolve to meet the moment.

Gabel said that the University of Minnesota is finding that balance by considering three questions: “What is our mission? Who do we serve? And what do we or should we create?” That led to a specific area of the university’s strategic plan called MNtersections, which reflects ways the university intersects with the state and can partner to address current and coming challenges.

“At the end of the day, we are unwilling, and I would submit, should not, abandon our values or our origins or our purpose. We can have an actual mindset about the future and infuse a futureness—a modernity—to what we do,” she said. “I think it’s this way that we remember who we are while also being agile and thinking about the future.”