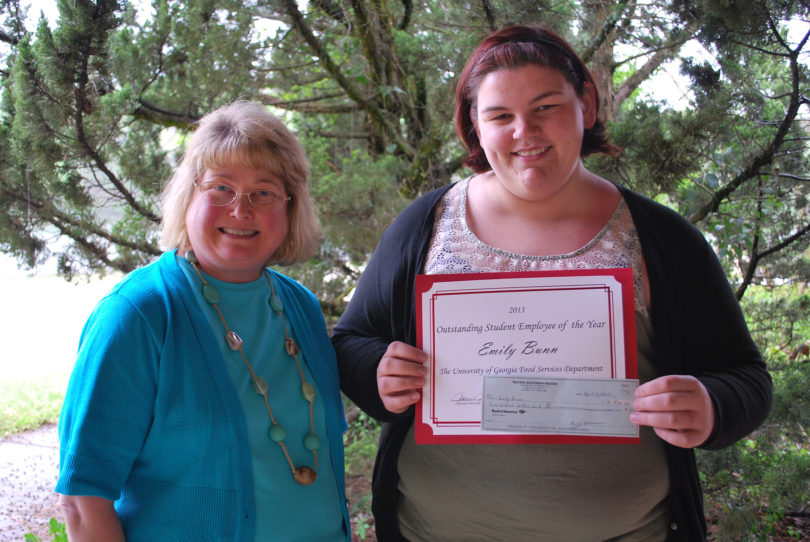 Athens, Ga. – Emily Bunn of University of Georgia Food Services recently received the student employee of the year award from the National Association of College and University Food Services Southern Region. The award is given annually to a student who best exemplifies reliability, quality of work, initiative, teamwork and contribution to their employer.

Bunn began working with food services in 2009 as a student employee in the Snelling Dining Commons, one of four dining commons at UGA. After learning about Snelling’s operations and excelling in her responsibilities, she was promoted to student clerical in 2012.

In the past year, Bunn has worked various shifts to accommodate management needs. When the dining commons was short on two clerical staff, she took on more responsibilities at her own initiative, according to her award nomination written by Snelling manager Rob Irwin and assistant manager Jessica Rogers.

“She often works early morning shifts, as early as 6 a.m. and, at times, will work shifts that go late into the evenings until 11 p.m.,” they wrote. “Despite having a full class load, an internship and 25 hours of work a week, Emily has maintained a strong work ethic.”

Bunn assists in monitoring more than 200 student employees in addition to approximately 75 full-time and part-time staff. She also is trained to work all serving stations at Snelling.

When promoted to student clerical, Bunn voluntarily reorganized the office filing system, making the hundreds of files for student and full-time employees more compact and efficient. She also has assisted in training many new student staff.

A driving force behind Snelling’s monthly newsletter, Bunn developed a four-page, full-color magazine with work-related topics such as health department tips and reports from managers, comic strips, crossword puzzles, jokes and a section to recognize the employee of the month.

Originally from Griffin, Bunn currently is working on a bachelor’s degree in English and a music business certificate. After graduation, she plans to pursue a career in music journalism.

UGA Food Services
Food Services at UGA is the largest college food service program in the Southeast. The department also has the distinction of winning 78 national food service awards throughout the years. For more information, see http://foodservice.uga.edu/.