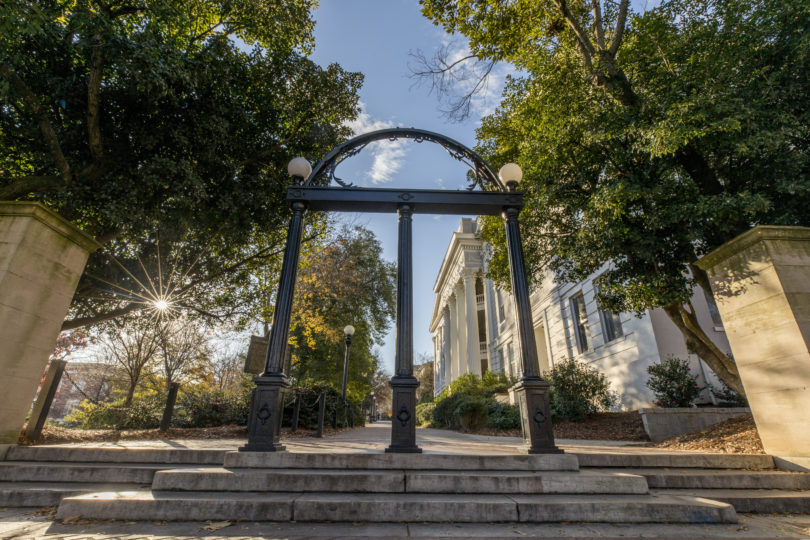 The University of Georgia Foundation approved changes in leadership and board positions during its annual meeting June 13-14 at Lake Oconee.

The board voted unanimously to elect John H. Crawford IV as chairman effective July 1 for a term running through June 30, 2021. He succeeds William W. Douglas III, whose term concludes June 30.

“I am grateful for my time on the board, and I am proud of all the University of Georgia – in partnership with the UGA Foundation – has achieved. I look forward to seeing what the UGA Foundation does under John Crawford’s leadership,” said Douglas.

“It’s with our deepest gratitude that we thank our outgoing trustees, all of whom have given generously of their time and energy,” said Crawford. “I am excited as we begin this new chapter in the UGA Foundation’s history, and I believe we have a tremendous opportunity ahead of us to not only serve our students, but our state and the world.”

John H. Crawford IV, of Atlanta, chairman, is the managing director of equity investments of Crawford Investment Counsel Inc.  He earned a bachelor’s degree in finance from UGA in 1988. He has served as the chair of the investment committee and as executive vice-chairman for the last two years.

Neal J. Quirk, of Atlanta, executive vice-chairman, is an attorney with Quirk & Quirk LLC.  He attended UGA and earned a bachelor’s degree in finance in 1982 and law degree in 1987.  He has served as the chairs of the strategic planning, development and nominating, and trusteeship committees.

Bonney Stamper Shuman, of St. Simons, treasurer, was the co-founder of Stratix Corporation in 1983 and served as president of the board and chief executive officer. She earned her bachelor’s degree in finance from UGA in 1980. Shuman previously served as an UGA Foundation ex-officio, voting trustee and as the UGA Alumni Association President.

Stephen M. Joiner, of Atlanta,, secretary, is retired as partner from Deloitte and Touche LLP, one of the nation’s leading professional services firms. He earned a bachelor’s degree in accounting from UGA in 1986.  He has served as chairs of the finance and audit committees as well as treasurer.

Betsy C. Cox, of Jacksonville, Florida, is a shareholder with Rogers Towers, P.A. concentrating in the areas of complex commercial, bankruptcy and estate litigation. She earned her law degree from UGA in 1980.

Elisha W. Finney, of San Francisco, retired as the chief financial officer of Varian Medical Systems Inc. in 2017. She earned her bachelor’s degree in risk management and insurance from UGA in 1983.

Leah C. Brown, of Phoenix, is a board-certified orthopedic surgeon specializing in sports medicine and treatment of the knee, shoulder and elbow. She was a 14-time NCAA All-American and a two-time NCAA National Gymnastics Champion and was inducted into UGA’s Circle of Honor in 2016 for these accomplishments. She earned her bachelor’s degree in genetics from UGA in 1998.

Elizabeth Correll Richards, of Atlanta, is chairman and chief executive officer of Quality Staffing of America Inc. She earned her bachelor’s degree in early childhood education and child psychology from The Ohio State University in 1992. She serves as the co-chair of the UGA Parent’s Leadership Council.

James L. “Jim” Dinkins, of Atlanta, is the president of Coca-Cola North America. Prior to his appointment he was President of the Minute Maid Business Unit. He earned his bachelor’s degree in management from UGA in 1984.

J. Keith Kelly, of Newborn, is the president and chief executive officer of Kelly products, which is one of the premier agribusiness companies in the U.S. He earned his bachelor’s degree in agricultural economics from UGA in 1980.

Jodi Holtzman Selvey, of Atlanta, is the senior vice president for Colliers International and specializes in Office Tenant Representation. Jodi recently served as the Chair of the Parents Leadership Council at UGA. She earned her bachelor’s degree in agricultural economics from UGA in 1984.

E. Howard Young, of Atlanta, is the president of General Wholesale Beer Company, a multi-generational family business. He is a member of the Terry Dean’s Advisory Council and chairs the Destroy Pancreatic Cancer nonprofit organization. He earned his bachelor’s degree in marketing from UGA in 1982.

The University of Georgia Foundation Board of Trustees

The UGA Foundation, established in 1937, stewards donor funds with a strong record of fiscal and financial management success. With an investment of over $1 billion and assets that total approximately $1.3 billion, the UGA Foundation provides an average of more than $65 million annually to UGA to advance its mission of teaching, research and public service.

The UGA Foundation Board of Trustees oversees the foundation’s work. Trustees lead and promote fundraising activities, accept and steward donor funds, and manage the financial assets of the foundation for the long-term benefit and enhancement of the university. Trustees also offer broad advice, consultation and support to university leadership.