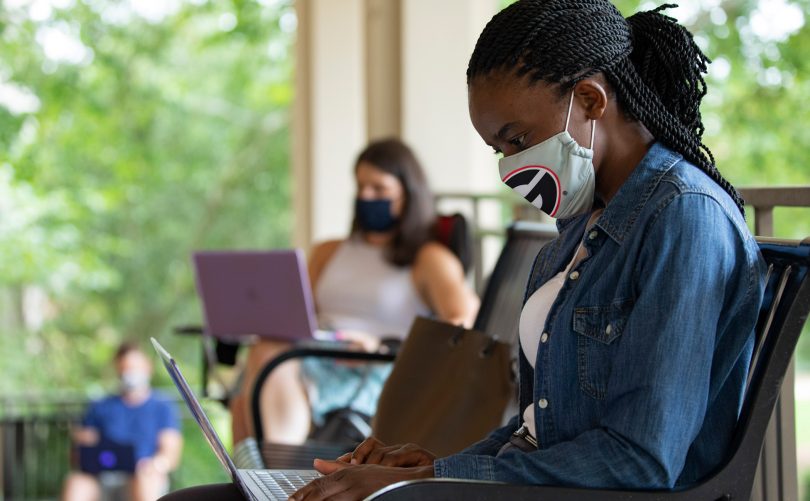 Graduate student Anne Waswa and her classmates participate in a doctoral class while social distancing outside Aderhold Hall. Several programs in the Mary Frances Early College of Education earned top 10 rankings in the 2022 edition of the U.S. News and World Report Best Graduate Schools. (Photo by Andrew Davis Tucker/UGA)

Several graduate programs in the University of Georgia’s School of Public and International Affairs, Mary Frances Early College of Education, and Institute of Higher Education have earned top 10 rankings in the 2022 edition of the U.S. News and World Report Best Graduate Schools.

“The University of Georgia is preparing students for a range of competitive fields through its outstanding graduate programs,” said Ron Walcott, vice provost for graduate education and dean of the Graduate School. “Our top 10 rankings reflect the quality of our faculty and programs, as well as the successes of our students after graduation.”

The School of Public and International Affairs ranked ninth overall and had several degree specialties in the nation’s top five. In addition to their academic coursework, graduate students in SPIA gain professional development skills through a partnership with the university’s Carl Vinson Institute of Government. SPIA’s specialties in public management and leadership and in public finance and budgeting both ranked third in the nation, and its specialization in local government management ranked fifth. The school’s specialty in nonprofit management ranked 21st in the nation.

The higher education administration program offered through UGA’s Institute of Higher Education ranked eighth in the nation, continuing a run of top 10 rankings dating back to 2007.

The School of Law moved up four spots this year to rank 27th in the nation and 11th among public university law schools. Its program in international law ranked 18th in the nation.

The latest rankings from U.S. News and World Report come at a time when UGA continues to expand the support that graduate students receive and the professional development offerings available to them. Earlier this month, UGA President Jere W. Morehead launched a new Graduate Student Degree Accelerator Fund to help students overcome financial challenges created by the COVID-19 pandemic and complete their degrees. To support graduate student career success beyond academia, the Graduate School offers programs and resources through its Office of Experiential Professional Development.

“Graduate education remains a key priority at the University of Georgia as we work to keep our students and state at the forefront of discovery and innovation,” said S. Jack Hu, senior vice president for academic affairs and provost. “Our programs prepare students with deep knowledge within disciplines and the ability to incorporate knowledge from across fields to address the grand challenges of our times.”