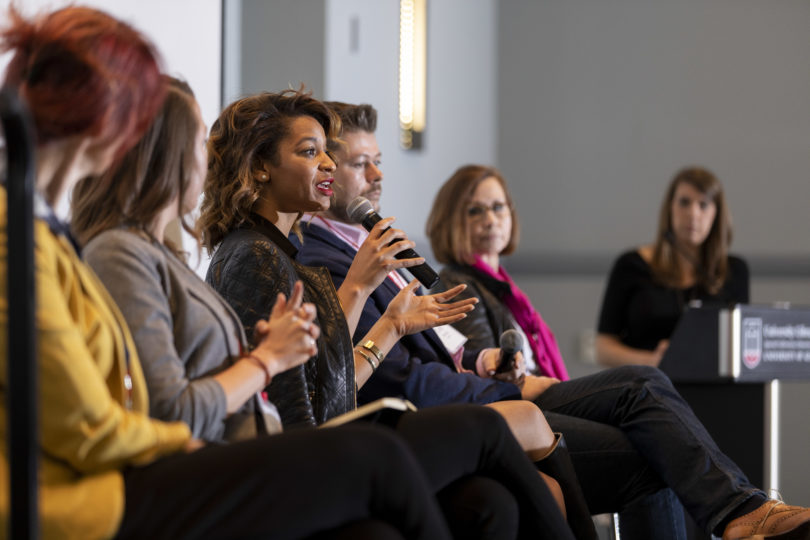 From left, UGA professor of microbiology and co-founder and CEO of VaxAlta Christine Szymanski; co-founder and CEO of Can I Recycle This Inc. Katherine Shayne; co-founder and owner of Bené Scarves Michelle Blue; CEO of Rigmarole Cody Murray; and CEO of Competitive Sports Analysis Diane Bloodworth speak while on a “Stories of Success” panel during the STEM Institute Workshop: Innovation at UGA, for all of UGA. (Photo by Andrew Davis Tucker/UGA)

Michelle Blue, 2013 UGA alumna and co-founder of Bené Scarves, talked about her experience as a young entrepreneur during the March 27 symposium, “Innovation at UGA, for all of UGA,” held in the Special Collections Library.

Co-sponsored by the Office of STEM Education and Office of Research, the event brought together innovators and entrepreneurs of all stripes to discuss the particular challenges and opportunities that face those looking to make an impact in the commercial world.

Blue’s panel, “Success Stories,” showcased the advice of people who have navigated some of those challenges. Her company Bené Scarves launched the year she graduated and devotes some of its revenue to providing education to girls in Ghana through sponsorship of tuition, books, supplies and uniforms. 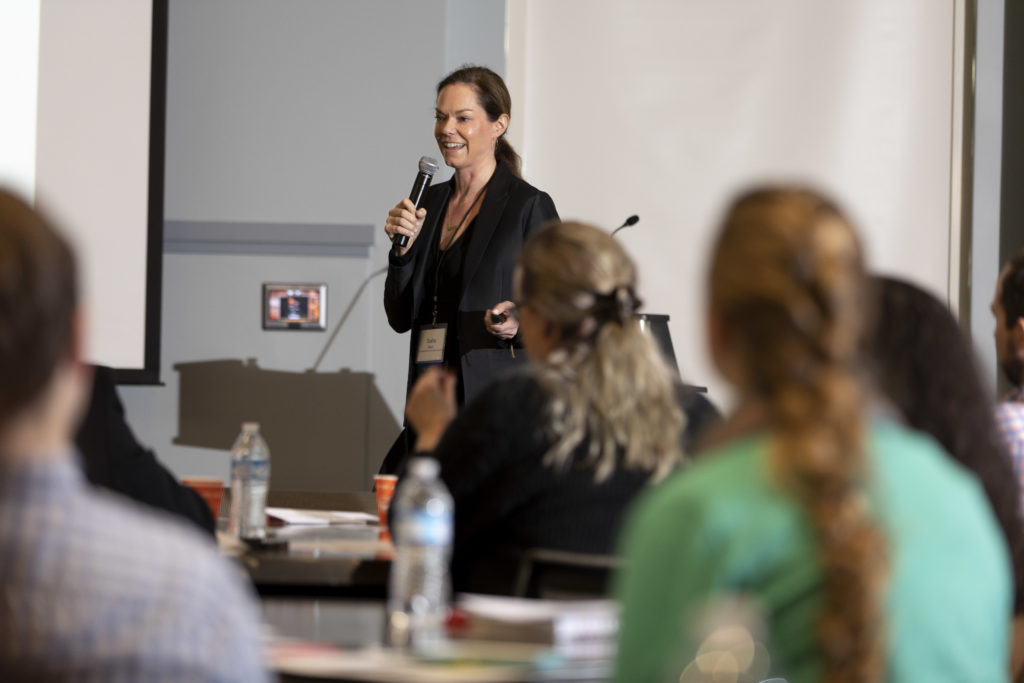 Chief Product Officer of Advanced Functional Fabrics of America and UGA alumna Tosha Hayes speaks during the STEM Institute Workshop: Innovation at UGA, for all of UGA. (Photo by Andrew Davis Tucker/UGA)

Delivering the keynote lecture was Tosha Hayes, who for 10 years was part of the senior management team at Spanx before leaving in 2014 to start her own brand, Brrr!, which makes cooling fabrics for active wear and other types of clothing. Also among the day’s offerings was Rory Cooper, associate dean for inclusion at FISA/Paralyzed Veterans of America Distinguished Professor in the University of Pittsburgh’s Department of Rehabilitation Science and Technology, who headlined a session titled, “Breaking Down Barriers.”

In kicking off the all-day symposium, Crystal Leach, UGA director of industry engagement, said she had three goals for attendees: to be informed about the resources available to budding UGA entrepreneurs; to be inspired by the stories of those who’ve successfully walked the path before them; and to become involved in an innovation ecosystem poised to shift into high gear through the UGA Innovation District initiative.