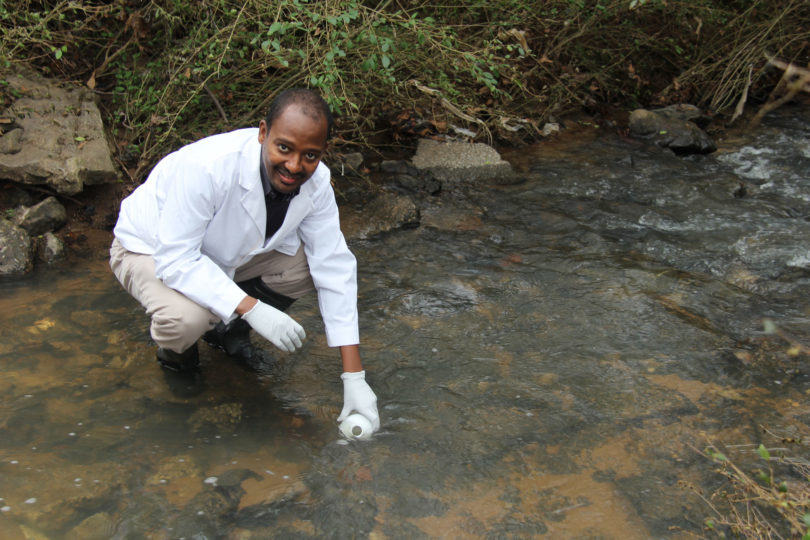 Mussie Habteselassie is an assistant professor of crop and soil sciences with the University of Georgia College of Agricultural and Environmental Sciences.

“Data for Metro Atlanta shows 525,970 septic systems in 2006, and more than 12,000 units were projected to be added each year,” said Mussie Habteselassie, the College of Agricultural and Environmental Sciences researcher conducting the wastewater study. His study focuses on determining how septic systems affect water quality in Georgia and the Southeast.

Based on the UGA campus in Griffin, Habteselassie leads the project that is testing the bacteria, nutrient and hormone levels in streams in the Oconee and Ocmulgee river basins in Gwinnett County. Test sites are set up both where a high number of septic tanks are located and in areas where the number of septic tanks is significantly lower, he said.

Habteselassie works with other scientists at UGA and the Georgia Water Science Center of the United States Geological Survey in Atlanta to complete the study. Habteselassie has taken water samples several times a year for the past two years under both dry and storm conditions. Samples will continue to be taken and tested through 2014 for the three-year study.

The streams tested in the study are used for recreational purposes, not as drinking water sources. So far his data show mixed results.

Early data show areas with a high density of septic systems have streams with increased levels of bacteria and nutrients, particularly after storms.

“Seventy-eight percent of Georgia’s drinking water comes from surface water,” he said. “That’s why we are looking at the effect septic systems have on water quality and quantity.”

However, early data also suggest dry season stream flows are higher in areas with a high density of septic systems.

The U.S. Department of Agriculture, National Institute of Food and Agriculture and the National Integrated Water Quality Program are funding the project, which will conclude the end of 2014.