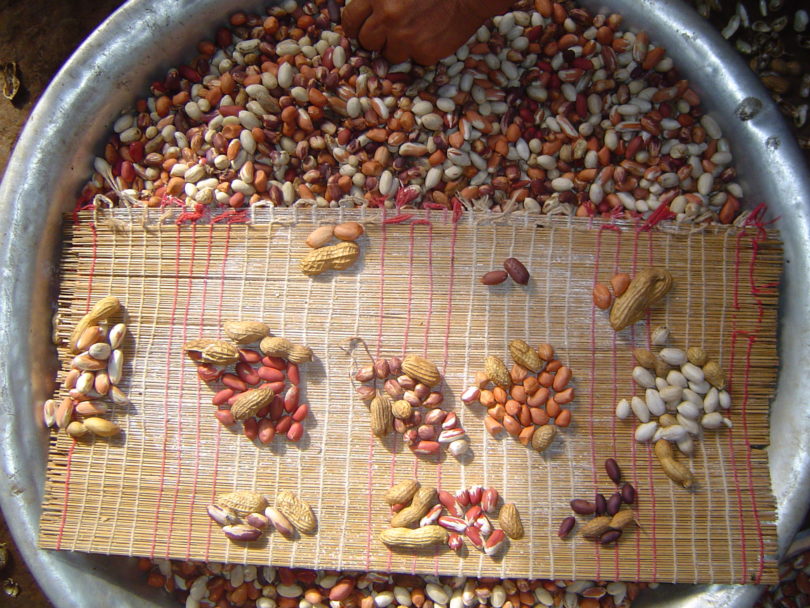 While Americans are familiar with one or two varieties of peanut, farmers in other parts of the world have been able to develop hundreds of varieties thanks to the peanut's natural ability to shuffle its two distinct subgenomes to produce new traits. These are some of the peanuts grown by the Caiabí people who live on the Ilha Grande, Mato Grosso, Brazil. Peanut is very important for them and they cultivate diverse types, each one with its use, name and story. (Photos by Fábio de Oliveira Freitas)

Working to understand the genetics of peanut disease resistance and yield, researchers led by scientists at the University of Georgia have uncovered the peanut’s unlikely and complicated evolution.

Researchers working as part of the International Peanut Genome Initiative have previously pinpointed one of the peanut’s two wild ancestors and shown that the peanut is a living legacy of some of the earliest human agricultural societies in South America. Since then the team has mapped the entire peanut genome and identified the crop’s second wild ancestor and the novel mechanism by which the shy, seed-hoarding plant generated the diversity we see today.

“Because of its complex genetic structure sequencing peanut was only possible using very recent developments in sequencing technology. The result is of unprecedented quality, and provides a reference framework for breeding and improvement of the peanut crop, and a whole new set of insights into the extraordinary genetic structure of peanut” said David Bertioli, Georgia Research Alliance Distinguished Investigator and peanut researcher at the College of Agricultural and Environmental Sciences.

Bertioli conducts his research through the CAES Institute for Plant Breeding, Genetics and Genomics, which is home to some of the world’s foremost experts in this area of crop science and has been prolific in providing new genomic tools and information to help plant breeders around the world develop more sustainable, productive crop varieties.

The team’s most recent paper was published in the journal Nature Genetics and is available online.

According to the USDA, farmers around the world grow 44.9 million metric tons of peanuts on more than 64 million acres. The crop is a staple food in many parts of Africa and Asia and is a source of peanut butter, snacks and cooking oil in the United States. In Georgia alone farmers grow $825 million in peanuts each year.

Despite their importance as a crop, plant researchers haven’t had many of the genetic tools needed to speed the introduction of more sustainable and productive peanut varieties. That was because, until recently, scientists had been unable to map the peanuts’ hypercomplex tetraploid genome. The Peanut Genome Initiative’s international collaboration and advancements in technologies and data processing yielded the breakthroughs.

The bedrock of the team’s discoveries was the sequencing of the genome. Because the peanut originated from the hybridization of two wild ancestral species thousands of years ago, the initial phases of the project involved researchers developing genome sequences for those ancestors. Together, the ancestral genomes made a prototype for the genetic structure of cultivated peanuts. This was published in 2016. 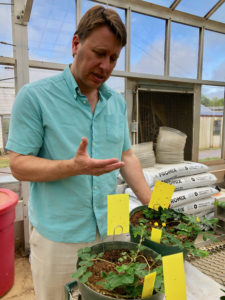 David Bertioli inspects peanut plants at the University of Georgia Institute for Plant Breeding, Genetics and Genomics greenhouse on Riverbend Road in Athens.

This month, the Peanut Genome Initiative discusses the entire genome sequence for the modern cultivated peanut in a paper published in Nature Genetics on May 1.

The researchers used new advances in DNA-sequencing technologies to produce a complete genome sequence of unprecedented quality. The sequence consists of more than 2.5 billion base pairs of DNA arranged in 20 pairs of chromosomes, 10 pairs from each of the ancestral species.

The information in the sequence sheds light on parts of the plant’s genetic code that control traits like seed size and disease resistance, which are important to plant breeders. But the sequence also revealed more about the origin of peanut during the dawn of agriculture in South America and on the genetic mechanisms that have generated diversity and allowed adaptation to environments around the globe.

The mother of peanut

Using the new genome sequence as a framework, the team was able to analyze the variations in more than 200 of the most diverse peanuts from all of over the world. Researchers found characteristic genetic fingerprints shared by all the peanut plants tested, providing new evidence that all modern peanut varieties stem from the same original hybrid. 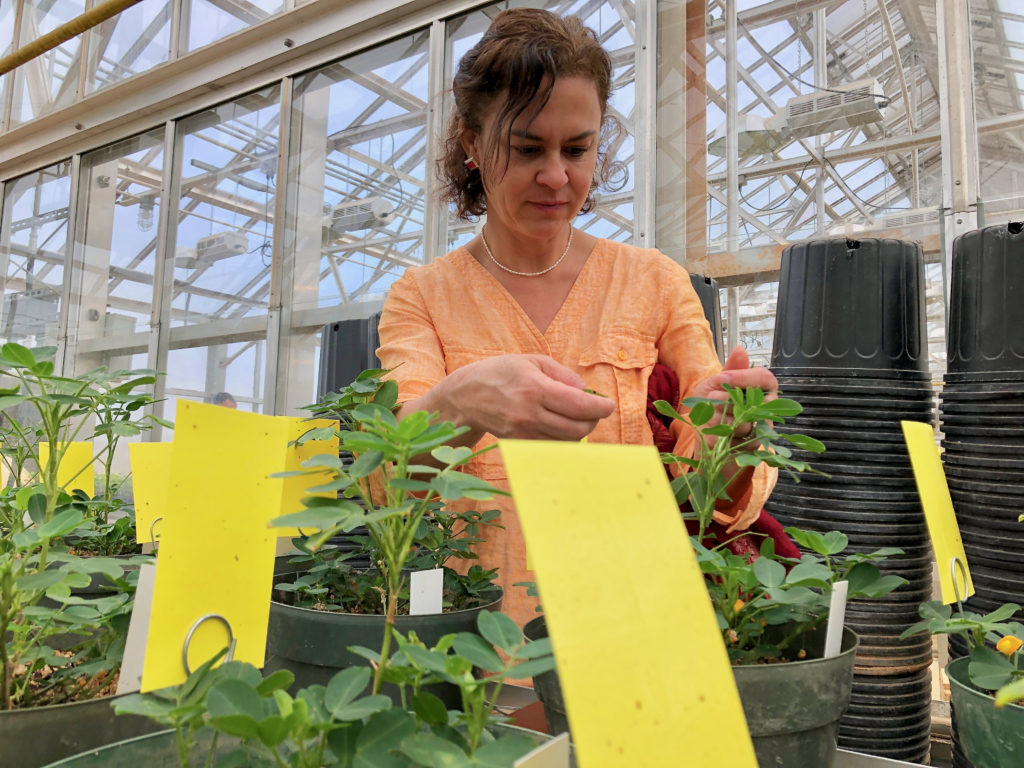 “The new study underlines how peanut’s origin was due to very special circumstances thousands of years ago. Ancient farmers transported one species into the range of another, allowing their hybridization and the formation of a new crop species,” said Soraya Leal-Bertioli, a senior research scientist with the UGA Institute of Plant Breeding, Genetics and Genomics and the CAES department of plant pathology.

Scientists with the initiative had previously found the male donor of the original hybrid and origin of peanut’s “B” subgenome. In this new study they identified the female donor, tracking the population of wild ancestral peanut that contributed the peanut “A” subgenome in Rio Seco, Argentina. These individuals form the “mother” population of peanut.

But the evidence that all modern peanuts can be traced to a single original hybrid sets up another mystery, Leal-Bertioli said. How does a plant with such a narrow genetic base develop so many variations and varieties?

Most flowering plant species rely on animals or weather to spread their pollen or seeds to other plants to generate genetic diversity. Pollen and seeds can travel for miles, spreading newly occurring traits to new populations.

But peanuts, which produce their seeds underground, don’t do that. It took early human farmers and their long-distance transport of seeds to get the first two ancestral peanut parents together.

Since then, however, the plant has used a new mechanism for creating diversity.

The peanut has two sets of chromosomes, one from each ancestor. By analyzing more than 200 cultivated peanuts from all over the world, it was shown that different landraces and cultivars have shuffled the genetic material of the ancestors and deleted some sections altogether. Over the past the 10,000 years, this shuffling has happened thousands of times — allowing a much faster-paced generation of diversity than if the plants simply relied on mutation.

In a greenhouse on the UGA campus, the Bertiolis have worked with hybrids that re-create the original ancestral peanut and observed the shuffling in real time. They documented its effects in the spontaneous appearance of different flower colors. These same genetic mechanisms generate other types of variation as well, said David Bertioli.

The phenomenon explains the tremendous about of diversity seen in peanuts today, said Leal-Bertioli.

For this research the International Peanut Genome Initiative brought together scientists from the U.S., Argentina, China, India, Japan and France. The initial sequencing was carried out at the Hudson Alpha Institute, Huntsville, Alabama, and USDA Agricultural Research Service Genomics and Bioinformatics Research Unit in Stoneville, Mississippi. The project was funded by the National Peanut Board, the American Peanut Shellers Association, and other growers, shellers, manufactures and allied industries.

For information on peanut research being conducted at UGA: A more resilient peanut.