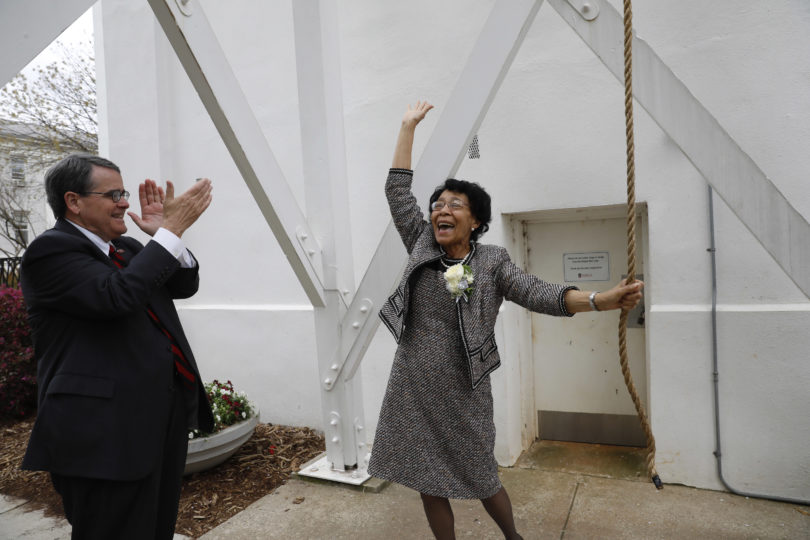 Following her 19th annual namesake lecture in April 2019, Mary Frances Early took a moment to participate in a campus tradition for the first time by ringing the bell at the UGA Chapel as President Jere W. Morehead applauded. The USG Board of Regents approved the naming of the College of Education in her honor in October 2019. (Photo by Peter Frey/UGA)

The University of Georgia College of Education is launching a special initiative to name its college for UGA’s first African American graduate, Mary Frances Early, as the university heads into the final year of its Commit to Georgia capital campaign.

“The proposed naming of the College of Education in honor of Mary Frances Early is a tribute not only to her trailblazing integration of UGA in the 1960s but also to her lifetime of accomplishment and service to others as a music educator,” said College of Education Dean Denise A. Spangler.

Over the course of the next year, gifts benefiting the College of Education may be dedicated in Early’s honor to go toward the proposed naming, which will be subject to approval by the University System of Georgia Board of Regents.

“I am deeply honored because I spent my entire career in education, and I never dreamed that I would receive such an incredible recognition from the University of Georgia,” said Early.

A lead gift to the campaign already has been made by UGA President Jere W. Morehead: a designation of $200,000 from the President’s Venture Fund which, when matched by the UGA Foundation, will be used to create four new $100,000 Georgia Commitment Scholarships for students with financial need. These Georgia Commitment Scholarships will be awarded with a preference for students who intend to pursue majors in the College of Education or music education majors in the Hugh Hodgson School of Music.

“I am delighted to join Dean Spangler in kicking off this campaign with a gift that not only honors Mary Frances Early but also that supports public education in Georgia by providing need-based scholarships for students who want to follow in her footsteps,” said Morehead. “She has touched the lives of thousands of students over her long career as an outstanding teacher, and this will enable future generations of students to continue her life’s work.”

College of Education Dean Denise A. Spangler discusses the proposed naming of the college after Mary Frances Early.

Early, who was class valedictorian at Henry McNeal Turner High School and earned a bachelor’s degree in music education from Clark Atlanta University in 1957, became a music teacher in the Atlanta Public Schools and was eventually promoted to music director of the entire school system. She worked with teachers in the system’s 100-plus schools, and was in charge of the music curriculum, budget, textbooks and more.

President Morehead led the dedication of her portrait in the university’s Administration Building in the fall, and in January 2018, she was named the recipient of one of UGA’s highest honors, the President’s Medal. She was presented with an honorary doctorate from UGA in 2013, and a documentary, “Mary Frances Early: The Quiet Trailblazer,” is dedicated to her life. Her life and accomplishments were featured in a Georgia Groundbreakers profile.