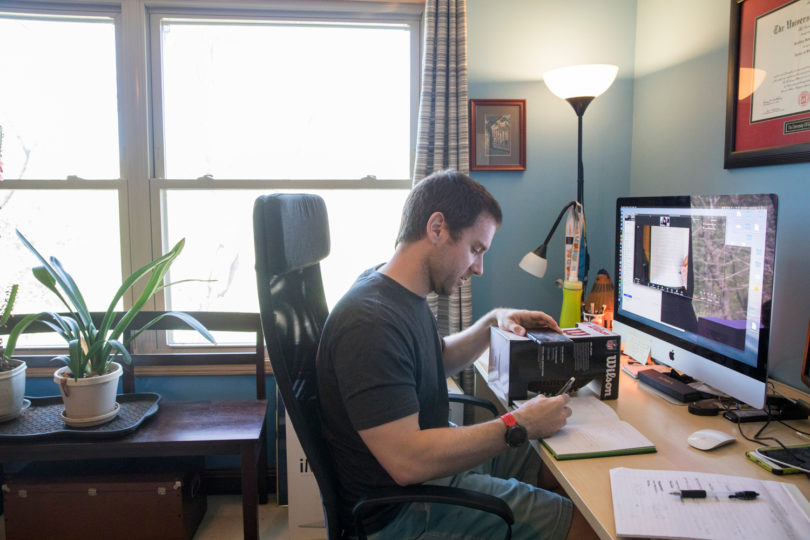 When UGA moved to online instruction in March, thousands of faculty had to learn a new way of teaching. The home office became ubiquitous, and faculty like Brad Barnes, a lecturer in computer science, made the best of it. (Photo by Dorothy Kozlowski/UGA)

The main campus of the University of Georgia in Athens covers 762 acres and includes 465 buildings. The spring semester of 2020 included some 37,000 undergraduate and graduate students enrolled in around 11,000 course sections. Imagine stuffing all that into your average laptop computer.

It can be done.

In response to the COVID-19 pandemic, the University System of Georgia announced on March 16 that all 26 of its institutions would move to online instruction for the remainder of the semester. And they had 15 days to set it up.

“That was no small feat,” says Rahul Shrivastav, vice president for instruction. “Our world-class faculty and staff pulled together to reinvent learning options for thousands of students under circumstances that were unfathomable when the original curriculum was created.”

The Center for Teaching and Learning (CTL), Office of Online Learning (OOL), Enterprise Information Technology Services (EITS), and University Libraries all played integral roles in the effort—many of their staff working from home.

CTL increased one-on-one consultations and partnered with OOL to provide Zoom sessions for broader audiences. EITS and University Libraries adjusted their hours of operation and technological services to further support the unique needs that arose during the transition period.

For OOL, something was abundantly clear from the start: Put empathy first.

“No matter who you are talking to, they have layers of concerns, and it is a mistake to ignore any of them,” says Steve Balfour, OOL’s director. “That was the first lesson.”

While UGA faculty were learning new ways to teach their classes, they were also discovering new ways to interact with students. Faculty had a good deal of flexibility to customize the online experience for their students. They approached everything with thoughtfulness and openness.

Margaret Christ, an associate professor of accounting in the Terry College of Business, turned her original class meeting time into office hours when students could drop in for live vidchats. She says the sessions were part teaching and part counseling.

Maryann Gallagher, a lecturer in the School of Public and International Affairs, shared her cell number and told 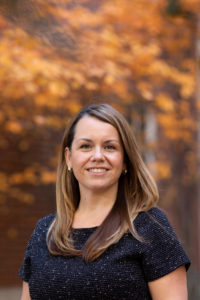 “With some students, this is the first time they’re taking an online course, and they’re taking four or five at the same time. Everybody has different preferences for what system they want to use and how they’re going to do it,” says Maryann Gallagher, lecturer in SPIA. (Photo by Andrew Davis Tucker/UGA)

students they could call anytime with concerns related to class, jobs, family, or anything else going on in their lives. She also surveyed students, asking them about their biggest concerns with regard to online learning.

“With some students, this is the first time they’re taking an online course, and they’re taking four or five at the same time,” she says. “And everybody has different preferences for what system they want to use and how they’re going to do it.”

Because of that wide range of needs, Gallagher recorded her lectures and posted class materials online so that students could access them on their own time.

Nick Fuhrman, Josiah Meigs Distinguished Teaching Professor in the College of Agricultural and Environmental Sciences, chose to hold his classes in real time.

“One thing the students enjoy about this is that it is fluid,” he says.

“Things just happen, and even if they don’t happen like you’d envisioned, it’s a teachable moment,” Fuhrman says. “Students ask great questions on chat, and we can capitalize on that. I like to kind of relax a little and have some fun with it. I use the GoPro or spin the computer’s camera around to show them I’m doing a demo on my kitchen table. It’s not NBC-quality video, but I think it builds a sense of rapport when students and instructors see into each other’s lives a little bit.”

The hands-on environment of laboratory classes posed its own challenges. The three professors on the anatomy team at the AU/UGA Medical Partnership worked together and decided to stay away from videos and instead provided students with graphic-, diagram-, and information-heavy work for them to complete on their own time.

“I know the students missed the interactivity that comes with in-person communication, and that’s difficult to re-create remotely,” says Ariel VanLeuven BS ’13, PhD ’18, assistant professor of cell biology and anatomy with the AU/UGA Medical Partnership. “But the students did like having materials available electronically, and that’s something we might consider for the future.”

VanLeuven is just one of the many professors who said they plan to keep some of this new online content for future courses. Gallagher also discovered that student participation online changed in positive ways.

“I gave students the option that they could earn some of their participation grade by Zooming with each other,” she says. “The discussions they had were fantastic. The sophistication of their analysis is wonderful. They prepared for these meetings, and they took them very seriously. I also think that my not being there gave them the space to put forth ideas and hear from their colleagues, and not just think about what’s right or wrong. I’ll keep that as an option moving forward.”

A Community Comes Together

With the entire academic community sheltering at home, leaders took significant steps to keep people engaged and connected. From individual classes to academic departments, all the way up to the school and college level, communications were frequent and supportive.

Faculty also supported each other organically, frequently across departments and schools. Since many faculty are connected on social media, one person’s post or question might lead to further conversations, new ideas, and just a lot of general support. 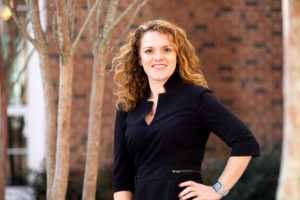 “Everyone is just trying to figure out how to do the right thing and what that looks like,” says Margaret Christ, associate professor of accounting in the Terry College of Business (Photo by Dorothy Kozlowski/UGA)

“I found those conversations to be most helpful,” Christ says. “Everyone is just trying to figure out how to do the right thing and what that looks like.”

Jerry Shannon, an assistant professor of geography in the Franklin College of Arts and Sciences, had a similar experience. “It was useful for me to think through some of the dynamics of working with students at a time like this,” he says. “They’re not always going to tell us fully how they’re feeling. They’ll put on a brave face. So, hearing about what others watched out for was helpful for me.”

When March 30 rolled around, the university’s online instruction launched and continued for the rest of the semester. While there were the inevitable pain points of online work, the last seven weeks of the Spring 2020 semester were marked more by a long series of small successes and happy discoveries.

“What we’ve seen is UGA as a community coming together,” says Balfour. “I haven’t really had a negative interaction with anyone in all of this. We didn’t ask if any of this was possible. We asked how we were going to do it.”