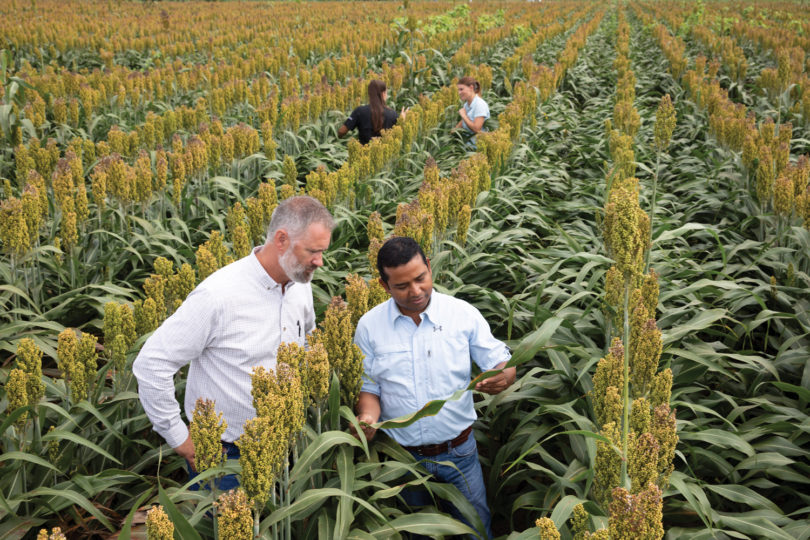 UGA’s Center for Invasive Species and Ecosystem Health is working to track—and eliminate—some 4,300 non-native insects, plants, and animals that are wreaking havoc on the environment and the economy.

Earlier this year, Chuck Bargeron learned how to catch a Burmese python.

The co-director of the University of Georgia’s Center for Invasive Species and Ecosystem Health was at a conference of the Everglades Invasive Species Cooperative Management Area, a consortium dedicated to advancing science-based understanding and enhanced management of the insects, plants, fish, and animals that are invading the Everglades. Bargeron is on the steering commitee of the group and an expert in combating invasive species.

There was a captured python in attendance and when Bargeron’s turn came to subdue it, he did as instructed and took hold of the snake just behind its head. The python was understandably agitated and as a defense mechanism began wrapping itself around Bargeron’s forearm. Bargeron was surprised by his own reaction. Or, rather, his lack of one.

“I didn’t grab it,” he recalls. “My first thought was that I didn’t want to hurt it.”

Before the six-foot-long snake, a mere juvenile version of a species that can grow up to 18 feet in the wild, could make any mischief, its handler unwound the python from Bargeron’s arm, which was none the worse for wear.

When it comes to invasive species in North America, pythons, which have devastated the delicate Everglades ecosystem, are public enemy No. 1. But they’ve got strong competition. Asian carp, should they swim their way into the Great Lakes, would create an environmental disaster that could cripple the economies of two countries. The emerald ash borer is a beetle that threatens every one of the country’s 38 million ash trees, and the $25 billion-a-year lumber industry that goes along with it.

From nearly microscopic aphids to wild boars the size of refrigerators, invasive species of all sorts are wreaking havoc on the environment, the economy, and a whole host of unsuspecting and vulnerable native species.

And there is a small office in the Administration Building at the UGA Tifton campus with its eyes on them all.

The Center for Invasive Species and Ecosystem Health draws its origins from a partnership in the mid-1990s between two UGA Tifton professors, Keith Douce in entomology and Dave Moorhead in forestry. They were looking for ways to enhance their work using information technology. The result was the Bugwood Image Database, a collection of high-resolution photos focused on forestry, integrated pest management, weeds, and other invasives. 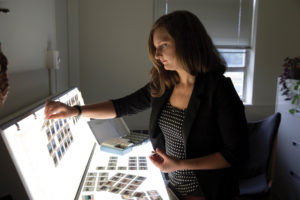 “It all started with these two professors and the technology they had on hand,” says associate director Joe LaForest. “They had a vision of what was coming down the road and were able to provide the tools and content that extension personnel could use.”

One of their first employees was Bargeron, who took a part-time job the summer after he graduated from Tift County High School and kept it as he earned bachelor’s and master’s degrees in computer science. He designed and built the infrastructure behind the image database and has been involved in each expansion.

The memorable Bugwood name (which references its founders’ backgrounds in entomology and forestry) has stuck. Bugwood.org launched in 2001, bringing the growing collection online for easy access. Even after the Center for Invasive Species and Ecosystem Health was formed in 2008 as a UGA Cooperative Extension and Outreach Center, its URL has remained.

In 2014, the center’s mission was expanded to include graduate student teaching and research.

Administratively, the center is jointly housed in the College of Agricultural and Environmental Sciences and the Warnell School of Forestry and Natural Resources.

Bargeron’s snake encounter notwithstanding, the majority of the center’s work is done on the UGA Tifton campus. The center’s 13-person staff is generally not out in the field hunting down invasive species, although by and large, they have the expertise to do exactly that. Rather, their role is to provide thousands of forest rangers, naturalists, scientists, and others around the country with the information they need to do their jobs better.

“Our work revolves around defining sustainability,” says Michael Toews, a professor of entomology who joined the center in 2014 when it expanded its research offerings. “Our job is to document changes over time and to provide a means to address problems.”

As of 2019, the database included more than 300,000 images. Thousands more are received each year, creating one of the most diverse and complete archives of invasive species and economically important species in the world.

And then there’s EDDMapS. A web-based mapping system that tracks the spread of invasive species and agronomic pests. Since its launch in 2005, it’s logged more than 4.2 million reports covering over 4,000 species. The tool gives experts real-time information about the spread of invasive species and helps them predict—and possibly prevent—them from spreading elsewhere.

Other center-led IT projects include a suite of more than 75 smartphone apps that are used to document forest health and the spread of invasive species. The center’s most recent partnership (with the U.S. Forest Service and the nonprofit Wildlife Forever) is WildSpotter.org, an identification and mapping app aimed at outdoor enthusiasts.

“Maybe reporting every kudzu patch or Japanese honeysuckle patch is not important in the big picture,” Bargeron says. “But if you get people reporting the common things, when they see something new or unusual, they will be more likely to report that.” 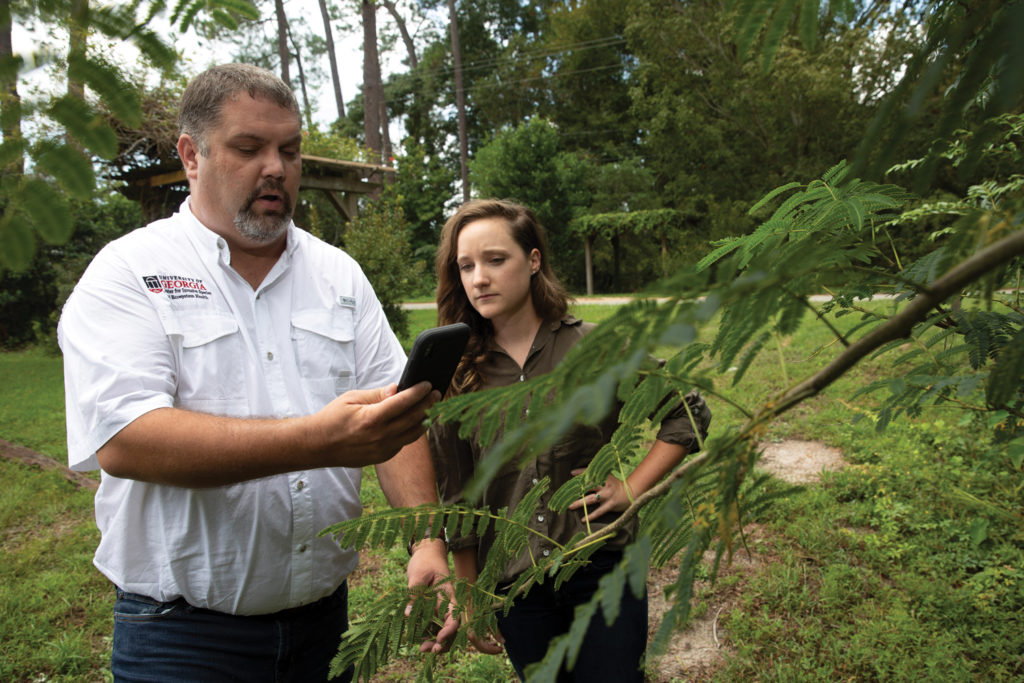 A Collection of Bad Ideas

It’s estimated that about 50,000 nonnative species have been introduced to the United States. Not all of them are considered invasive. To earn that dishonor, a species must cause some sort of harm to the environment, the economy, or public health. By that definition, the country’s invasive species number about 4,300. Exact numbers are hard to pin down, but it’s estimated that invasive species cost the U.S. economy more than $120 billion each year.

Those species get here in a variety of ways. Many hitch rides on cargo ships or stow away in bushels of imported agriculture. Perhaps the most frustrating are those that were deliberately introduced. Pythons either escaped from breeding facilities during Hurricane Andrew in 1992 or were pets deliberately released into the Everglades after growing too large.

Domestic pigs are a staple of American agriculture, but their invasive, wild cousins, were first brought to the continent by Spanish explorers in the 1500s and the destruction the animals brought to native species and agriculture continues nearly unabated today. 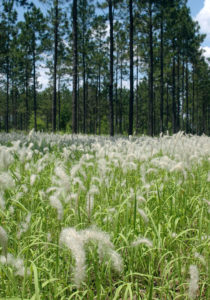 Invasive cogongrass chokes out native plants and it tough to get rid of because nothing eats it. The plant also burns so hot that prescribed fires are more dangerous than practical.

Another of the earliest instances of errors regarding invasive species was the European Gypsy moth. Imported into New England in the 1860s, the idea was to create a new home for silk manufacturing in North America. Then the moths got out. Gypsy moth larvae feed on more than 300 species of trees. The adults can defoliate entire forests.

“These invasive species in the U.S. are not pests at all in their native lands,” Toews says. “We simply don’t have the ecosystem that’s evolved with that particular species to manage it.”

Success with an Asterisk

In 1911, cogongrass came to Mobile, Alabama, riding along on some packing material on a ship from Japan. It quickly made a new home in the South and started choking out native grasses and shrubs. It was tough to manage, nothing eats it (not even wild pigs), and it burns so hot that prescribed fires are more dangerous than practical.

Cogongrass eradication in Georgia began in the 1990s, and so far it’s been a success. The Georgia Forestry Commission, along with the center and other partners, have been leading the way. As of 2018, just 320 acres of cogongrass have been reported in the state, and the number of new reports are equal to those areas that have been eliminated. It’s even dropped off Georgia’s annual Dirty Dozen list of invasive plants (see below). That type of containment qualifies as a big success.

In 2018, Michael struck Georgia’s far-southwest corner, where cogongrass is most prevalent, and then travelled northeast over portions of the state where cogongrass had never been seen. Now maps tracking the presence of cogongrass show a disturbing congruence to Michael’s path. Could the storm have deposited cogongrass seedlings over the area, leading to an eventual outbreak? Could utility and land-clearing equipment from outside the area help spread cogongrass?

The answer might not be known for years, as the cogongrass would need to take root and then be detected. That sort of uncertainly is something the Center for Invasive Species accepts as just part of the job. Doesn’t make it any easier, though.

“There is always that concern of when the next thing is going to show up,” Bargeron says.